Clan Eliott is a borderclan. The Elliotts, with the Armstrongs, were the most troublesome of the great Scottish Border families in the Middle Ages.[1] The principal family in the early days was the Elliots of Redheugh, who often held the captaincy of Hermitage Castle — still to be seen, squat and impregnable, on the moors south of Hawick. One of the Elliots of Redheugh, forefather of the Elliots of Arkleton, fell at Flodden (the beautiful lament for that disaster, The Flowers of the Forest, was written by Jane Elliot, sister of Sir Gilbert Elliot, first Baronet of Minto in the 18th century).[2]

The Elliots were one of the great riding clans of the western Scottish borders. There were different banches of the clan over time. But leadership resided initially with the Redheugh Ellots (Robert Ellot who fell at Flodden in 1513 had been their 12th chief). This clan built strong towers around their base in Liddesdale and held Hermitage castle south of Hawick at times as well.[3]

After the pacification of the Borders in the early 1600's, many Elliots were hanged, outlawed and banished, with a number heading to Ulster in the 1609 plantation. The Redheughs became Stobs and then Minto. The Mintos took the right side during the Glorious Revolution of 1688 and were rewarded with knighthood and titles and became part of the political establishment.[4]

The Elliots, dispossessed in the Borders, settled as tenant farmers in Ulster, manly in Fermanagh. Here they formed a cohesive group, strong enough to ride out the 1641 rising. They perpetuated their Border traditions, large close-knit family groups with intense clan loyalties and ongoing feuds. Today the Elliotts, together with the Armstrongs and the Johnstons from the Borders, comprise three of the five most common names in Fermanagh.[5]

The Elliott name, generally as Elliot, was also present south of the border, in Northumberland and in Durham as the coal industry started to attract miners there. There are also accounts of Elyot as a surname in southern England in the early 1300's.

The Elliots have existed as a Clan with a recognized Chief at least from the time of King Robert the Bruce (1306-1329) to the present day. There are many famous people who bear the name of Elliott.

The name Eliott is believed to derive from the village of Eliot in Angus although the Old English form of Elwold also appears in Scotland. Little is known of the early history of Clan Eliott because few records survive. This could be because the Eliott's Castle Stobs was burned down in 1712.

Legend has it that the extra "t" in Eliott arose when a branch of the Eliotts adopted Christianity. The t was in reality meant to be a cross. The differences in spelling can be distinguished in this rhyme:

Robert Bell in "The Book of Scots-Irish Family Names" adds: "For double L and double T, the Scots should look across the sea!" He pointed out that 71 of 76 births of children by that name in Ireland in 1890 spelt it "Elliott." Elliot(t)s emigrated or were sent to Ireland in the early 17th century after the unification of the English and Scottish crowns. The Elliot(t)s were notorious reivers - cattle thieves - in the Scottish-English border area and, as such, a thorn in the side of both governments. Many settled in county Fermanagh.

Scott of Satchells in 1688 reported that in the time of King Robert the Bruce the Clan Eliott who lived in the north in Glenshire moved to Teviotdale in the Scottish Borders. If this unusual move occurred it may have been in order to protect King Robert the Bruce's son who was also called Robert. This Robert Bruce had become Lord of Liddesdale. The previous Lord of Liddesdale, William de Soulis was serving life imprisonment for treason.
This account must be considered of dubious reliability since there are no written references to the Eliotts prior to the 15th century, and as noted above the name may well be an Anglo-Saxon one and not derived from the river in Glenshire at all. It is not exactly unheard of for an origin myth to be manufactured from a similar sounding name, particularly when it offers the chance of a flattering association with Scotland's most famous monarch.

The chief of the clan was usually appointed as Captain of Hermitage Castle in Liddesdale. In 1476 the tenth chief of Clan Eliott was Robert Ellot of Redheugh. The Eliotts became famous as one of the great Scottish "riding" clans.

During the Anglo-Scottish Wars the 13th chief Robert died when he led the Clan Elliot in support of King James IV of Scotland at the Battle of Flodden Field in 1513 fighting against the English.

In 1565 Scott of Buccleuch of Clan Scott executed four men from Clan Eliott for cattle rustling.

Gilbert Eliott of Stobs was made a Baronet of Nova Scotia in 1666. Another Gilbert Elliot, of Minto, was created Baronet in 1700 and made a Lord of Session in 1705.

Of the chiefs' direct line, several were distinguished as judges and empire builders. The most famous were Gen. George Augustus Eliott, who as governor of Gibraltar in 1779, conducted the heroic and successful defence of the Rock when it was besieged by Franco-Spanish forces, and Sir Gilbert Elliot-Murray-Kynynmound, 4th Baronet, who was created 1st Earl of Minto: he followed his father into politics and in 1794 was made Viceroy of Corsica. In 1807, Lord Minto was appointed Governor General of India.

His great-grandson, Gilbert Elliot-Murray-Kynynmound, 4th Earl of Minto (1845-1914), is remembered in the sporting world for having broken his neck riding in the Grand National. The mishap had no permanent effects and he was Governor-General of Canada before succeeding Lord Curzon as Viceroy of India in 1905. He was the chief architect of the Morley-Minto Reforms, regarded as dangerously radical in some circles at the time though, as it turned out, insufficient to stem the tide of Indian unrest.

The seat of the Earl of Minto is Minto House, in Hawick, and of the Eliot of Stobs, chief of the clan at Redheugh. A Council ordered demolition of Minto house was started in September 1992. Sections of the historic Minto House were deemed unsafe.

The chief of Clan Eliott is Margaret Frances Boswell Eliott of Redheugh, Chief of the Name and Arms of Eliott.[6]

The crest badge used by clan members consists of a crest encircled by a strap and buckle containing a motto. The crest is a raised fist holding a sword, while the motto is FORTITER ET RECTE (translation from Latin: "With strength and right").[7] 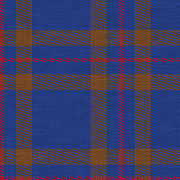 There are two different versions of the Elliot tartan available today. Although very similar, the two vary slightly. The modern tartan and the ancient tartan vary in the intensity of the colors.

The ancient version uses lighter colors, as the dyes were made from plants and berries. The dark stripes appear to be a dark burgandy or brown, and the blue is a lighter shade.

The modern version (pictured at right) makes use of the stronger, modern chemical dyes and therefore result in a brigher, bolder color. On this one, the dark stripes appear almost black, and the blue is almost a saphire blue.

Also, the width of colored bands differs, with the ancient tartan being more condensed, with finer lines.