Clan Buchanan is an Armigerous Scottish clan whose origins are said to lie in the 1225 grant of lands on the eastern shore of Loch Lomond to clergyman Sir Absalon of Buchanan by the Earl of Lennox.[3]

Traditionally, Clan Buchanan can trace its origin back to Anselan O Kyan who was a son of the King of Ulster who landed in Argyll in 1016.[4] For his services against the Danes he received the lands of Buchanan, which lie to the east of Loch Lomond around the village of Killearn.[5]

Clan Buchanan has occupied the lands surrounding the shores of Loch Lomond since 1225 as a result of a grant by the Earl of Lennox to Sir Absalon of Buchanan in which he is referred to as 'clericus meus', meaning 'my clergyman'. Towards the middle of the 13th century Gilbert seneschal to the Earl of Lennox obtained part of the lands of Buchanan in Stirlingshire and took his surname from the lands called Buchanan.[3] 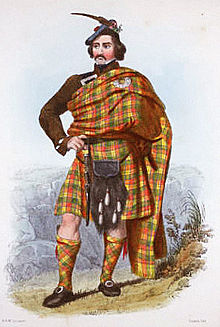 A romantic depiction of a clansman illustrated by R. R. McIan, from James Logan's The Clans of the Scottish Highlands, 1845.

During the Wars of Scottish Independence the Clan Buchanan supported King Robert the Bruce fighting at the Battle of Bannockburn and securing their lands.[citation needed]

In 1497 Kenneth Mackenzie, 8th of Kintail, chief of Clan Mackenzie was killed by the Laird of Buchanan.[6]

During the Anglo-Scottish Wars the Clan Buchanan fought against the English at the Battle of Flodden Field in 1513 where the chief's elder son Patrick was killed. However Patrick had already married a daughter of the Earl of Argyll and had two sons and daughters.[3]

John Buchanan became proprietor of Arnprior, and afterwards the noted "King of Kippen", a phrase which originated in a whimsical episode between himself and James V, who was fond of travelling in disguise under the title of "The Good Man of Ballageigh"[7][8], after the steep path leading down from the Castle of Stirling.

Demanding admittance at the palace of Arnprior, he was refused by a camp-looking warrior standing at the gate with a battle-axe sloped on his shoulder, who told him there was no admission, as his chief was at dinner with a large company and could not be disturbed at that time. "Tell your master," said James, "the Guidman o' Ballengeich humbly requests an audience of the 'King of Kippen'." Buchanan, guessing the quality of his guest, received His Majesty with the appropriate honours, and became so great a favourite that he had leave to draw upon the carrier as often as he pleased, and was invited, as "King of Kippen" to visit his brother sovereign at Stirling.

The Buchanans fought on the side of the Covenanters at the Battle of Bothwell Brig in 1679.

The Clan Buchanan took no part in the Jacobite uprisings of 1715 to 1716 or the 1745 to 1746 uprising.[citation needed] This was probably due to several reasons including their proximity to the land of the more powerful Campbells who fought with the Hanoverians and a break in the line of the chieftainship of the clan.[citation needed]

However, several members of Clan Buchanan fought at Culloden in the Duke of Perth's Regiment. Two individuals documented are: 1) Alexander Buchanan, born 1728, son of the Laird of Auchleishie, Callander, Perthshire, Sterlingshire, Jacobite Captain in the Duke's Regiment, prisoner at Perth, Canongate, Carlisle, ship, and London, transported 22 April 1747 from Liverpool to the Colony of Maryland on the ship "Johnson"[10], 2) John Buchanan, servant to Alexander Buchanan, resident of Auchterarder, Perthshire, Jacobite in the Duke's Regiment, prisoner at Auchterarder, Stirling, Carlisle, transported 24 Feb 1747 on the ship "Gildart" to the Colony of Maryland.[11]

The Septs of Clan Buchanan derive from the first Auselan to use the surname Buchanan, Gilbert, whose father had obtained the Buchanan lands, and his brothers Colman and Methlan, grandson Maurice, and great-grandson Walter.[12]

the sept masterson was irish, the scottish sept of Buchanan is spelt Masterton.[citation needed]