Clan Graham (Clann Greumach) is a Scottish clan who had territories in both the Scottish Highlands and Lowlands.

Legend has it that the first Graham was one Gramus who forced a breach in the Roman Antonine wall known as Graeme's Dyke in 420 A.D. However, historians generally believe that the Grahams were of Norman descent.

The surname Graham is derived from the English place-name Grantham, Lincolnshire, which appears in the Domesday Book both as Grantham and Graham.[2] The first Graham in Scotland was Sir William de Graham (or De Graeme), a Norman knight who accompanied David I, on his journey north to claim the Scottish crown in 1128.[3] William De Graeme witnessed the signing of the charter founding the Abbey of Holyrood in the same year 1128. From this line descended the Montrose line of Grahams, one of the most distinguished families of Scotland.

Twice the Montrose Grahams married into the royal family. From these came some notable men. First among them was Sir John de Graham, right hand man to William Wallace, killed during the Wars of Scottish Independence at the Battle of Falkirk in 1298.[4] The Clan Graham also fought at the Battle of Dunbar in 1296 where Sir Patrick Graham of Kincardine was the only man of all the Scots not to retreat and instead fought to the death.[4] The Clan Graham also fought against the English at the Battle of Durham in 1346, in support of Robert the Bruce. The Grahams acquired the lands of Mugdock north of Glasgow, where they built a stout castle around 1370. 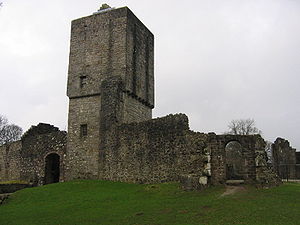 Mugdock Castle was the clan's stronghold

In John Stewart's book, The Grahams, he states that "Most Scottish Clans would be proud to have one great hero. The Grahams have three." He refers to Sir John, James Graham, 1st Marquess of Montrose and John Graham, 1st Viscount of Dundee.[5] Stewart also wrote,

It is remarkable that the early Grahams were one and all exceedingly capable men. In an age when the reputation of many great public figures, alas, that of most of the Scottish nobility, were sullied by deeds of violence, and often deeds of blackest treachery, it is refreshing to find that the Grahams stand out as loyal and true to the causes they espoused. Their story is not one of rapid rise to power through royal favor, or even at the expense of their peers, but rather a gradual steady rise based on their undoubted ability and worthiness which seems to have endured from one generation to another.

In 1504 Lord Graham, on account of his gallantry was made 1st Earl of Montrose. He would go on to lead part of the Scottish Vanguard against the English at the Battle of Flodden Field in 1513, part of the Anglo-Scottish Wars where he was slain.[4] The Clan Graham were among the clans who fought against the English at the Battle of Pinkie Cleugh 1547, where the eldest son of the second Earl, Robert, Lord Graham was slain.

In October 1644, Huntly Castle was captured by James Graham, 1st Marquess of Montrose and defended it against the Duke of Argyll. In 1645 James Graham at the head of his royalist forces took the opportunity to lay waste to the lands of Clan Arbuthnott; this was because the Arbuthnotts who had previously been loyal to the Royalist cause had become sympathetic to the Covenanters.

After several years of victories James Graham, 1st Marquess of Montrose was finally defeated at the Battle of Philiphaugh 13 September 1645 by the Government army of Sir David Leslie, Lord Newark, restoring the power of the Committee of Estates. Graham was supported by the Clan Douglas who were led by Chief William Douglas, the 11th Earl of Angus. Graham was also supported by the Clan Robertson, Clan Stirling, Clan Ogilvy, Clan Charteris and Clan Maclachlan. at this battle. The Royalist army of the Marquess of Montrose was destroyed[15][16]

In 1646 James Graham laid siege to the Castle Chanonry of Ross which was held by the Clan Mackenzie. Graham took it from the Mackenzies after a siege of four days.[17]

In 1650 James Graham captured Dunbeath Castle castle of the Clan Sinclair, who would later support him at Carbisdale. James Graham, 1st Marquees of Montrose was defeated at the Battle of Carbisdale by the Munros, Rosses, Sutherlands and Colonel Alexander Strachan.[18]

Another notable Graham was John Graham, 1st Viscount of Dundee also known as John Graham of Claverhouse or "Bonnie Dundee". By means of purchase and inheritance the Graham lands had become, by the late seventeenth century, among the richest in Scotland.

The Clan Graham took no side in the Jacobite Uprisings and remained neutral throughout. Highlanders can thank the James Graham, 3rd Duke of Montrose, for the repeal in 1782 of the Act of 1747 prohibiting the wearing of highland dress. He persuaded Parliament to remove the law forbidding Scots to wear their tartan.[19]