The Clan Lockhart arrived in Scotland among the waves of Normans who arrived after the Norman conquest of England in 1066. The Lockharts settled in Lanark and Ayrshire where the towns of Symington, South Ayrshire, Symington, South Lanarkshire and Stevenson[disambiguation needed

] remain to mark the past influence of Simon and Steven Locard. The exact date when the lands of Lee came into the family is not known, but 1272 is traditionally accepted.

14th Century and the Crusades 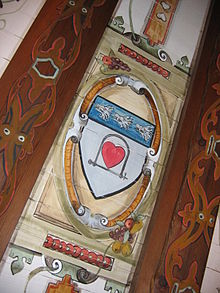 Symon Locard, 2nd of Lee, won fame for himself and his family in the wars against the English when he fought alongside King Robert the Bruce and was knighted for his loyal service. Sir Symon accompanied 'Good Sir James Douglas' of the Clan Douglas when he took the heart of Robert the Bruce on the crusades in 1330. It was Sir Symon who carried the key to the casket in which the heart was carried. Symon rescued the casket and heart and returned it to Scotland after James Douglas had been killed in Spain. It is said, the arms of a 'heart within a fetterlock', and the name in its present form came into use.

During the crusades of the 14th century the Lockharts brought back a precious heirloom, a touch piece which has been treasured ever since. It is known as the "Lee Penny". At the Battle of Teba in Spain, Sir Simon Lockhart captured a Moorish Emir and received from the man's mother as part of his ransom an amulet or stone with healing powers. The Prince's mother told Sir Simon that the stone was a sovereign remedy against bleeding and fever, the bite of a mad dog, and sickness in horses and cattle. The stone is dark orange in colour and oblique in shape and was later set in a silver coin which has now been identified as a four penny piece from the reign of King Edward IV. The Lee Penny is kept in a gold snuffbox which was a gift from Maria Theresa of Austria, Empress of Austria to her general Count James Lockhart in 1789.

The fame of the Lee Penny spread through Scotland and Northern England and there are many recorded occasions when it was employed with apparent success. The coin was exempted from the Church of Scotland's prohibition on charms and was lent to the citizens of Newcastle during the reign of King Charles 1 to protect them from the plague. A sum of between £1000 and £6000 was pledged for its return.[1] The penny gained further fame in the nineteenth century for inspiring Sir Walter Scott's 1825 novel The Talisman.[2]

The 7th Laird was knighted by King James IV of Scotland and in 16th century the 8th Laird was involved in a case of forgery. His son, Alan, 9th Laird, was sentenced to the block for the slaughter of David and Ralph Weir, on separate occasions, and with this family they seem then to have been in constant feud. His sentence was revoked, and he received 'remission' in 1541. 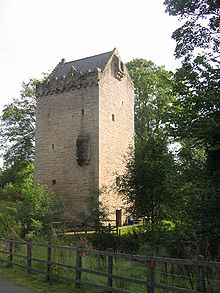 The Tower of Hallbar was purchased in 1681 by George Lockhart of Lee Castle, whose estate adjoined it.

Sir George Lockhart (1630–1689) was the second son of Sir James Lockhart, Lord Lee, Lord Justice Clerk and became one of the most famous advocates at the Edinburgh Bar. He became Lord President of the Court of Session in 1685 and was M.P. for Lanarkshire in both the English and Scottish Parliaments. His knighthood was conferred in 1663 and the Carnwath and Dryden estates acquired by him in 1681. He was murdered on Easter Sunday on his way home from church by a dissatisfied litigant named Chiesly of Kersewell and Dalry.

George Lockhart, Second of Carnwath (1673–1732) was a fervent Jacobite; he became Principal Agent to the exiled King James after the Rising of 1715. He was one of the Commissioners for the Treaty of Union, and the only one against it. He was one of the earliest of the agricultural improvers. He married Euphemia Montgomery, daughter of the ninth Earl of Eglinton; they had fourteen children. He died as the result of a duel.

Count James Lockhart, Nineteenth of Lee (1727–1790) was the second son of The Hunting Laird and married three times. He had through these marriages, two daughters and two sons; his son Charles succeeded him. Being the second son, employment in Britain was difficult; from his youth he showed an interest in the army. His brief life account in “Biographisches Lexikon des Kaiserthums Osterrich” says Thirst for action and an inclination for warfare led him at a very early age into military service; as a young man he was a soldier in Persia under Shah Nadir. After many years of adventures in various countries he entered the Austrian service As a soldier of fortune, James joined Maria Theresa of Austria’s army at the end of the War of Austrian Succession, as a low ranking soldier. By the time of his death in 1790, he had gained a reputation for bravery, and on 17 March 1782 he was created a Count of The Holy Roman Empire by the Grand Duke of Tuscany, the grandson of Maria Theresa, the title being Count Lockhart-Wishart of Lee & Carnwath. He inherited Lee & Carnwath on the early death of his brother George. He kept a close eye and interest in the Estate, but spent the majority of his time in the service of the Austrian Royal Family where he was regarded in the highest esteem.

Chief: Angus Hew Lockhart of the Lee, Chief of the Name and Arms of Lockhart.[3]

The seat of the Chief of the Clan Lockhart is at Lee Castle near Lanark.[4]

The current Clan Chief resides near the Lee Castle. The castle was sold off in 1950 and is no longer in the Lockhart hands. The castle is a private residence and is not open for public viewing.