Clan Ross is a Highland Scottish clan. The original chiefs of the clan were the original Earls of Ross.[1]

Clan Ross is a Highland Scottish clan first named as such by King Malcolm IV of Scotland in 1160. The first of the chiefs was Fearchar, Earl of Ross from the O'Beolain family, also known as 'Fearchar Mac-an-t-sagairt' (meaning "son of the priest") of Applecross.[1]

Ferquhard Ross helped King Alexander II of Scotland (1214–1249) crush a rebellion in Moray and Ross-shire. When King Alexander II ascended to the throne, a rebellion broke out in Moray and western Ross-shire, whose Celtic population were opposed to the laws and customs of the south. The King marched northwards with his army but was unable to crush the insurgents from Ross and Moray. However, Fearchar, Earl of Ross, with a large body of men from his own clan and his allies, appeared on the scene and soon wiped out all opposition to the King's authority. Fearchar brought the King the heads of the rebel leaders and was knighted on 15 June 1215. He was created Earl of Ross in about 1234.[1]

The Clan Ross by tradition fought at the Battle of Largs in 1263 in support of Alexander III of Scotland against King Haakon IV of Norway. The Norwegian forces were defeated by the victorious Scots.[1]

During the Wars of Scottish Independence the Clan Ross fought against the English at the Battle of Dunbar (1296) where their chief, the Earl of Ross was captured. This meant that for a short time Uilleam II, Earl of Ross sided with the English but he later supported Robert the Bruce of Scotland. The Clan Ross fought alongside King Robert the Bruce when Earl Fearchar's grandson William led the clan against the English at the Battle of Bannockburn in 1314. Aodh, the 5th earl, was killed at the Battle of Halidon Hill in 1333, and his successor William died without male issue. The earldom of Ross and the chiefship of Clan Ross were then separated.[1] 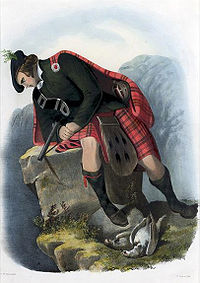 A romanticised Victorian-era illustration of a Ross clansman by R. R. McIan from The Clans of the Scottish Highlands published in 1845.

The chiefship of the Clan Ross passed to Earl William's brother Hugh Ross of Rariches, who was granted a charter, in 1374, for the lands of Balnagowan. The Rosses of Balnagowan held the chiefship for 300+ years. David, the last of that direct line, passed the chiefship to the Hon. Charles Ross, son of Lord Ross of Hawkhead, Renfrewshire, although they were not connected by blood.[1]

The earldom of Ross passed through a female line, and that later led to dispute between two rival claimants—the Lord of the Isles and the Duke of Albany. This resulted in the Battle of Harlaw 1411, where the Clan Ross fought as Highlanders in support of the Lord of the Isles against an army of Scottish Lowlanders who supported the Duke of Albany.[1]

The Rosses took part in the Battle of Verneuil 1424, against the English in France. On the death of the Earl of Buchan and Ross, at that battle, the Earldom of Ross reverted to the crown. James I on his return from his long captivity in England, restored it to the heiress of line, the mother of Alexander, Lord of the Isles.[1]

At the Battle of Tarbat, 1486, Angus Roy Mackay was overthrown and slain at Tarbet Church by the Clan Ross. The Mackays and Rosses had long feuded. Again and again the Rosses had suffered attacks on their lands from their enemies and when at last, driven to desperation and thoroughly infuriated, they gathered their forces and marched against the Mackay Chief, they were in the mood to teach the Mackays a severe lesson. The Mackays, with Angus of Strathnaver at their head, finding themselves fiercely attacked and being defeated by the Rosses, sought shelter in the church of Tarbat. There many were slain, and the church being set on fire, Angus Mackay and many of his clansmen were burnt to ashes.[1]

Battle of Auldicharish, 1487, to take revenge on the Clan Ross, chief Ian Mackay of Strathnaver, also helped by a force from the Clan Sutherland marched south invading the territory of Clan Ross and began laying waste to it. Chief Alistair Ross gathered his forces of 2000 men and engaged in a long and desperate battle with the invading forces. In the end the battle went against the Rosses with the Mackays and Sutherlands gaining the upper hand. The Ross chief was killed along with many of his clan. Amongst the dead "gentlemen" of the province were Angus MacCulloch of Tarell, Alexander Tarell, William Ross of Little Allan, John Vass, Thomas Vass, Hugh Vass, John Mitchell and William Ross. After this the Clan Ross took many years to recover their once large numbers of fighting men.[2]

Soon the Mackays were raiding Ross lands once again and more blood was shed. In 1496 the King summoned chiefs David Ross and Iye Roy Mackay. He ordered them to appear before the Earl of Argyll who was then the Lord High Chancellor of Scotland and make peace, on the understanding that should they not be peacful that they would be fined 500 merks. The Mackays continued to raid the Rosses and it would appear the civil authority was too feeble to stop them. However the Mackays soon became involved in feuding with the Clan Sutherland and raids on the Rosses did not continue.[1] 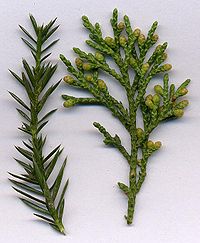 During the Anglo-Scottish Wars, John Ross, 2nd Lord Ross of Halkhead, died when leading his forces against the English at the Battle of Flodden Field on September the 9th, 1513. Fought in the county of Northumberland, in northern England, between an invading Scots army under King James IV and an English army commanded by Thomas Howard, Earl of Surrey. It ended in a bloody defeat for the Scots. It is sometimes referred to as the Charge of the Earls.[1]

Chief Alexander Ross 9th of Balnagowan (d.1592) is recorded as being a man of violence, utterly unscrupulous, given to raiding lands and forcing his clansmen to draw out agreements in his favour with total disregard for the law. Soon he was imprisoned in Tantallon Castle. Later he was released on the condition that he would live peacefully but he did not. His own son George was given permission to use fire and sword against him but Alexander could not be brought in. Alexander died in 1592.[1]

David Ross 12th of Balnagowan signed the National Covenant at Inverness on 26 April 1638. He later joined the royalists for a short time only to become a covenanter again and was present at the defeat of James Graham, 1st Marquess of Montrose in 1650.[1] During the Civil War at the Battle of Carbisdale the Clan Ross and Clan Munro fought on the side of the Scottish Government, then led by the Duke of Argyll. They defeated the royalist army of James Graham, 1st Marquess of Montrose.[1]

David Ross, 12th of Balnagowan later led some of the clan at the Battle of Worcester on 3 September 1651 where he was captured and imprisoned at the Tower of London. He is said to have died there in 1653 and been buried in Westminster.[1] A number of Ross clansmen who were taken prisoner were subsequently sent to Massachusetts Bay Colony as indentured servants.[citation needed]

In 1689 100 men of the Clan Ross occupied Castle Leod to watch for movements of the Jacobite MacKenzies.

In the Jacobite Rising of 1715, Clan Ross supported the Hanoverian Government during the Jacobite uprisings. In 1715 The Earl of Seaforth led a force of 3000 men headed by the Clan MacKenzie which also included men from the Clan MacDonald, Clan MacKinnon, Clan MacRae and the Clan Chisholm. He was opposed by Colonel Sir Robert Munro of Foulis who had formed a camp at the Bridge of Alness with 600 men, which also included men from the Clan Ross. Munro had sent many of his own men south to protect the lands of the Clan Forbes of Culloden from the Jacobites. Munro was soon joined by the Earl of Sutherland and the Chief of Clan Mackay who both brought with them only a portion of their clans. As a result of underestimating the strength of the enemy the government force totalled just 1800 and expected support from the Clan Grant did not arrive. The Earl of Seaforth's forces advanced on the Sutherland's camp who made a quick retreat to avoid contact with their more powerful foe. Soon afterwards a council of war was held between the two sides and the Sutherlanders and Mackays peacefully moved back north to their own territory, while much of the Ross's and Munro's lands were ravaged.

The clan rivalries which had erupted in rebellion were finding an outlet in local politics. The MacKenzie's Earl of Seaforth came to an end in 1716, and it seems to have been arranged that while the Clan Ross held the county seat the Munros would represent the Tain Burghs. To secure the burghs, control of three out of the five was necessary. The Ross ascendancy was secure in Tain, and from 1716 to 1745 the Munros controlled Dingwall. In 1719 some men from the Clan Ross fought for the government at the Battle of Glen Shiel where the Jacobites were defeated.[3]

In 1721 a force of men from the Clan Ross, led by chief William Ross 6th of the Pitcalnie line and his brother Robert went on a rent collecting expedition into the lands of the MacKenzies.They were defeated by the Mackenzies at the Battle of Glen Affric.[4]

During the Jacobite Risings in the County of Ross, although from the Pitcalnie line, the nominal 18th Chief of Clan Ross was Alexander Ross of Pitcalnie. He was a staunch Protestant, somewhat more tolerant of Jacobites than his father but definitely pro-Hanoverian. In addition, Alexander's uncle, Duncan Forbes of Culloden, was Lord President of the Court of Session for King George II of Great Britain's government in London. Duncan Forbes and Alexander Ross the Pitcalnie chief raised a Ross Independent Company to garrison Inverness Castle against the Jacobites.

The McFarquhars of Redcastle brought a strong Jacobite contingent from the Black Isle to join the forces of the Earl of Cromarty and a rebel, John Ross joined them. Forays were made before the Battle of Culloden and on the day before the battle, 15 April 1746, about 200 of the McFarquhar's Jacobite force were ambushed by pro-government Scots at the Battle of Littleferry near Golspie. At most one-tenth survived; John Ross escaped to Sutherland but was first to be put on a list of rebels. However, apart from him the Clan Ross mostly supported the government.

The chiefship of Clan Ross devolved upon Ross of Pitcalnie, heir of David who was the last of the direct line of Balnagowan. Sir John, the 5th baronet, assumed the name "Ross" and then, after Carstairs was sold in 1762, the designation "of Balnagowan."

The Balnagowan estate itself is no longer in Ross hands. It is currently owned by the millionaire Egyptian proprietor Mohammed Al-Fayed of the Harrods department store who has put a lot of money into improving the estate and restoring the castle. The current Chief lives in Perthshire. His son, Hugh lives in Aberdeen with his family: Jennifer, Calum and Catriona Ross.

The three tartans listed are actually only TWO : the two hunting tartans listed are the same pattern tartan - the weathered and ancient are just faded versions of the modern. However, the Ross red tartan, missing here, is a clan tartan.

The historic seat of the chief of Clan Ross is at Balnagown Castle. The correct spelling is actually Balnagown,[5] or alternatively Balnagowen.