Clan Campbell is a Highland Scottish clan. Historically one of the largest, most powerful and most successful of the Highland clans, their lands were in Argyll and the chief of the clan became the Earl and later Duke of Argyll.

The earliest attested Campbell is Gilleasbaig of Menstrie (floruit 1260s), father of Cailean Mór, from whom the chiefs of the clan are thought to have taken their style MacCailean Mór. The byname kambel is recorded at this time. Fanciful reconstructions derive it from the Spanish de Campo Bello, but the likely source is the caimbeul, an Early Modern Irish or Gaelic by name meaning wry mouth, crooked mouth or twisted mouth, which refers to "the man whose mouth inclined a little on one side" .[3]

Regarding the earlier ancestors of Clan Campbell, there is good evidence that the Campbells themselves traced their descent from an earlier kindred known as the Mac Duibne, or perhaps the Uí Duibne. It has been suggested that the family's early landholdings, around Menstrie, and in Cowal, were related to the partition of the Earldom of Menteith in 1213, and that Gilleasbuig may have been a kinsman of Muireadhach I, Earl of Menteith. The lands around Loch Awe, which would later form the core of their possessions, were not held at an early date.

The name begins to be established in Argyll at the end of the 13th century, as followers of the Earl of Lennox, with Campbells owning lands in Kintyre and the famous warrior Cailean Mór (Great Colin) knighted (1280) and established at Loch Awe. Cailean Mór's older brother established at Strachur forming the oldest branch of Clan Campbell, see Campbell of Strachur.

Between 1200 and 1500 the Campbells emerged as one of the most powerful families in Scotland, dominant in Argyll and capable of wielding a wider influence and authority from Edinburgh to the Hebrides and western Highlands.[3]

The family of Colin Campbell went on to become firm supporters of King Robert the Bruce and benefited from his successes with grants of lands, titles and good marriages. They fought for the Bruce against the English at the Battle of Bannockburn in 1314 during the Wars of Scottish Independence. During the 14th century the Clan Campbell rapidly expanded its lands and power. This is partly explained by the loyalty of Sir Niall Campbell (Niall mac Caile), (d.1315), to the cause of Robert I of Scotland (the Bruce) – a loyalty which was rewarded with marriage to Bruce's sister Mary.[3]

The first Lord Campbell was created in 1445. It was from the 15th century that the Campbells came to take an increasingly prominent role. The personal reign of James I of Scotland, saw that king launch a great political assault on the Albany Stewarts and their allies in the west, however Duncan Campbell, 1st lord Campbell (Donnchadh), escaped the fate of his Albany kinsmen who were all either executed or exiled.[3]

Colin Campbell, 1st Earl of Argyll (Cailean) was en-nobled as the Earl of Argyll in 1457 and later became Baron of Lorn and was also granted lands in Knapdale, signs that the Argylls were one of the major forces in Scotland. In 1493 after the forfeiture of the MacDonald, Lord of the Isles, the Campbell lords may well have viewed themselves as natural successors to the Clan Donald in terms of leadership of the Gaels of the Hebrides and western Highlands. The Campbell lordship thus remained one of the most significant bastions of Gaelic learning and culture in late medieval and early modern Scotland.[3]

Battle of Knockmary, 1490, Men of the Clan Campbell and the Clan Drummond join forces to defeat the Clan Murray.[4] This also became known as the Massacre of Monzievaird.

The Battle of Flodden took place in 1513, during the Anglo-Scottish Wars of the 16th century the Clan Campbell, led by Archibald Campbell, 2nd Earl of Argyll fought on the side of King James IV of Scotland against an English army. Many of the powerful Earls of Scotland participated in this battle which is sometimes referred to as the Charge of the Earls.[5] Later during the Anglo-Scottish Wars the Clan Campbell was among the Scottish forces who fought the English at the Battle of Pinkie Cleugh on 10 September 1547. Due to the large number of Scottish lives lost at this battle 10 September is remembered today in Scotland as Black Saturday.[6]

The Battle of Langside took place in 1568, the chief of Clan Campbell, Archibald Campbell, 5th Earl of Argyll, commanded the forces who fought for Mary, Queen of Scots against the forces of the Regent Moray, who were commanded by William Kirkcaldy of Grange.

In 1567, a conflict took place between the Clan Campbell and Clan Arthur. Duncan MacArthur and his son of the Loch Awe MacArthur family, became the victims of their own success when jealousy of their power drove neighbours to drown them in Loch Awe during a skirmish with the Clan Campbell. In the archives of Inveraray Castle a charter dated 1567 confirms that a pardon was granted to the Campbells of Inverawe for the "drowning of Clan Arthur". It is believed that the MacArthurs trying to defend themselves were driven into the loch. Centuries later in the 1970s an ancient sword was unearthed on the shore of the loch.[7][8]

The Battle of Glenlivet took place in 1594, Archibald Campbell, 7th Earl of Argyll's forces of Clan Campbell, Clan Stewart of Atholl, Clan Forbes and the Chattan Confederation of Clan Mackintosh fought against the Earl of Huntly who was supported by the Clan Gordon, Clan Comyn and the Clan Cameron.[9] 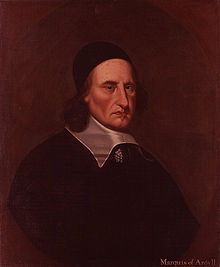 During the Civil War, the Clan Campbell fought as Covenanters. In 1644, the Clan Irvine, who were staunch royalist supporters, found themselves surrounded by Covenanter clans. The Irvine's Drum Castle was sacked on 2 May 1644 by the Clan Campbell. A chair with Drum symbols, now in the Scottish Museum, Edinburgh, is believed to have been taken from Drum Castle either in 1644 by the Campbells or in 1640 when a previous raid was carried out by General Robert Monro.

At the Battle of Inverlochy (1645), the Scottish Argyll Covenanter forces of Clan Campbell led by Archibald Campbell, 1st Marquess of Argyll were defeated by the Royalist forces of James Graham, 1st Marquess of Montrose mainly made up from Clan MacDonald, Clan MacLean, Clan Ogilvy and other MacDonald allies from Ireland.

After the Battle of Inverlochy in 1645 Montrose laid siege to Castle Campbell but was unable to beat the Clan Campbell defenders and failed to take the castle.[10]

At the Battle of Stirling (1648) the forces of Archibald Campbell, 1st Marquess of Argyll were defeated by the forces of Sir George Munro, 1st of Newmore who supported the Earl of Lanerick. Among Argyll's dead was William Campbell of Glenfalloch killed in action.[13][14]

In 1672, debt forced George Sinclair, 6th Earl of Caithness to resign his titles and estates in favour of Sir John Campbell.[15] Campbell took possession of the estates on Sinclair's death in May 1676, and was created earl of Caithness in June the following year.[16] Sinclair's heir, George Sinclair of Keiss disputed the claim and seized the land in 1678.[16] This was followed by the Battle of Altimarlech, 13 July 1680, between the Clan Campbell and the Clan Sinclair. The Campbells were victorious.[16] Legend has it that so many Sinclairs were killed that the Campbells were able to cross the river without getting their feet wet.[16] Having failed to regain his inheritance by force, Sinclair of Keiss then turned to the law. He took his place as Earl of Caithness on 15 July 1681, and his lands were restored on 23 September.[16] Campbell was made Earl of Breadalbane by way of compensation.[16]

Later in 1691 Duart Castle was surrendered by the Clan MacLean to the chief of Clan Campbell, Archibald Campbell, 1st Duke of Argyll.

In 1692, 78 unarmed MacDonalds were murdered in the Massacre of Glencoe when a government initiative to suppress Jacobitism was entangled in the long running feud between Clan MacDonald and Clan Campbell. The slaughter of the MacDonalds at the hands of the soldiers, led by Captain Robert Campbell of Glenlyon, after enjoying their hospitality for over a week was a major affront of Scottish Law and Highland tradition. The majority of soldiers were not Campbells, but a roll call from a few months before included six Campbells in addition to Cpt. Robt. Campbell: Corporal Achibald Campbell, Private Archibald Campbell (elder), Private Donald Campbell (younger), Private Archibald Campbell (younger), Private James Campbell, Private Donald Campbell (elder), and Private Duncan Campbell. Retrieved from: Earl of Argyll's Regiment of Foot 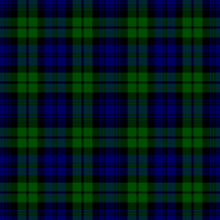 The Black Watch tartan, also known as the Government sett, or the Campbell tartan. The tartan was used, and is in current use, by several military units throughout the Commonwealth.[17]

On 23 October 1715, chief John Campbell, 2nd Duke of Argyll having learned that a detachment of rebels was passing by Castle Campbell, towards Dunfermline, sent out a body of cavalry which came up with the party and defeated it, taking a number of gentlemen prisoners, with the damage of one dragoon wounded on the cheek and one horse slightly injured. A month later the British government forces, with the forces of Clan Campbell, fought and defeated the Jacobites at the Battle of Sheriffmuir in 1715. However there were in fact a small number of Campbells who took the side of the Jacobites led by the son of Campbell of Glenlyon whose father had commanded the government troops at the Massacre of the Glencoe MacDonalds 22 years earlier. These two families then settled their differences and swore to be brothers in arms, fighting side by side in the Sheriffmuir. However the British government forces led by the Duke of Argyll defeated the Jacobites.[18]

In 1725, six Independent Black Watch companies were formed: three from Clan Campbell, one from Clan Fraser, one from Clan Munro and one from Clan Grant. These companies were known by the name Reicudan Dhu, or Black Watch. Taking advantage of the partisan nature and warrior instincts of the highlanders, these men were authorised to wear the kilt and to bear arms, thus it was not difficult to find recruits. The Regiment of the Line was formed officially in 1739 as the 43rd Highland Regiment of Foot under John Lindsay, 20th Earl of Crawford, and first mustered in 1740, at Aberfeldy. In May 1740, when the Independent companies were formed into the 43rd Highland Regiment (later the 42nd Royal Highlanders), Sir Robert Munro, 6th Baronet of Foulis was appointed lieutenant-colonel, and John Lindsay, 20th Earl of Crawford was colonel. The regiment was then officially known as the 43rd Highland Regiment of Foot.

During the Jacobite Uprisings of 1745 to 1746 the Clan Campbell continued their support for the British Government. They fought against the rebel Jacobites at the Battle of Falkirk (1746) where government forces were defeated. However shortly afterwards the Clan Campbell held out during the Siege of Fort William. The Jacobites could not defeat the Campbell defenders who had been well supplied. Eventually the Campbells sent out their own force from Fort William who defeated the besieging Jacobites and captured their siege cannons.[19]

Soon afterwards men of the Clan Campbell who formed part of Loudon's Highlanders Regiment helped to finally defeat the Jacobites at the Battle of Culloden in 1746. 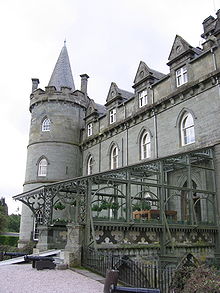 Inveraray Castle, seat of the Duke of Argyll, Chief of Clan Campbell.

Although mills produce many fabrics based on the Campbell tartan, the Clan Chief recognizes only four:

The Sixth Duke of Argyll added a white line to his tartan to distinguish himself as Clan Chief. He was the only member of the family to do so, but the tartan has persisted as "Campbell of Argyll". Campbell of Argyll, as with any other tartan not listed above, is not recognized as official.[21]

A History of Clan Campbell: From the Restoration to the present day By Alastair Campbell

A History of Clan Campbell: From Flodden to the Restoration By Alastair Campbell

The house of Argyll and the collateral branches of the clan Campbell, from the year 420 to the present time, J. Tweed, 1871