Clan Montgomery originated in Wales, and emigrated to Scotland in the 12th century as vassals of the FitzAlans.[2][3] The family derives its surname from lands in Wales, likely from the Honour of Montgomery which was located near the Shropshire lands of the FitzAlans.[3] There is no evidence of any familial connection between Clan Montgomery and the family of the Earls of Shrewsbury, who derived their own surname from lands in Calvados, Normandy.[3][2]

The earliest member of the clan in Scotland was Robert of Montgomery, and the earliest possessions of the clan (in Scotland) was Eaglesham, in Renfrewshire.[3] Members of the clan are recorded in the late 13th century Ragman Rolls, but it is not until the 14th century when the family rose in prominence, through a dynastic marriage with the Eglington family. Through this marriage the clan acquired the Eglington estates; the clan also acquired the lands of the Ardrossan family (which was possibly a branch of the Barclay family).[2]

A descendant of Robert was Sir John Montgomery who led the Clan Montgomery at the Battle of Otterburn in 1388 where the English were defeated. He was one of the heroes of the day as he distinguished himself by capturing Sir Henry Percy who was known as "the Hotspur". The Percy family paid a great ransom for the release of Henry "Hotspur" Percy and this money enabled the Clan Montgomery to build the Polnoon Castle.

The Tournament bridge and Eglinton castle in 1876.

In 1488 the Clan Montgomery burned down the Clan Cunningham's Kerelaw Castle. The two clans had been on opposing sides at the Battle of Sauchieburn, with Hugh Montgomery among the victorious rebels and Alexander Cunningham, 1st Earl of Glencairn slain with the defeated James III. A longstanding rivalry (principally over the Bailieship of Cunninghame) was now a vendetta.

During the 16th century the long-running feud continued. Edward Cunningham of Auchenharvie was slain in 1526 and Archibald Cunningham of Waterstoun in 1528;[4] Eglinton Castle was burned down by the Cunninghams in the same year. In April 1586, Hugh Montgomery, 4th Earl of Eglinton, aged twenty-four, was travelling to Stirling to join the Court having been commanded to attend by the King, accompanied only by a few domestic servants. He stopped at Lainshaw Castle to dine with his close relative, a Montgomery, the Lord of Lainshaw, whose Lady was a Margaret Cunningham of Aiket Castle, with sisters married to John Cunningham of Corsehill and David Cunninghame of Robertland.[5] It seems that a plot to kill the Earl had been organised and the Lady, or some say a servant girl who was also a Cunningham,[4] climbed to the battlements after the meal to hang out a white table napkin and thereby sprung the trap. Thirty Cunninghames attacked the Earl as he crossed Annick Ford and cut his servants to pieces; the Earl himself was dispatched with a single shot from the pistol of John Cunningham of Clonbeith Castle. His horse carried his dead body along the side of the river, still known as the 'Weeping', 'Mourning' or 'Widows' path. A wave of bloody revenge swept over Cunninghame and elsewhere. Cunningham relatives, friends and supporters were killed without mercy. Aiket was killed near his home; Robertland and Corsehill escaped to Denmark. Clonbeith was traced to a house in Hamilton, possibly Hamilton Palace[6] and hacked to pieces by Robert Montgomery and John Pollock. Robert also killed the Earl of Glencairn's brother the Commendator of Kilwinning Abbey, Alexander of Montgreenan, thought to have instigated Hugh's murder. He rode to Montgreenan and shot the Commendator at his own gate.[7]

The government of King James VI of Scotland eventually managed to make the chiefs of the two clans shake hands. In 1661 Lord High Chancellor William Cunningham, 9th Earl of Glencairn, married Margaret Montgomery, daughter of Alexander, 6th Earl of Eglinton, drawing a line under the feud.

The 2nd Earl of Eglinton led the Clan Montgomery in support of Mary, Queen of Scots, at the Battle of Langside in 1568, where the Queen was defeated. The Earl was declared guilty of treason and imprisoned in Doune Castle. When the Earl, chief of Clan Montgomery was released he tried to secure the safety and toleration of Catholics in the wake of the Reformation. 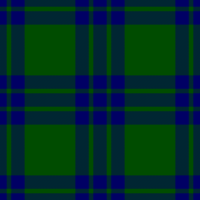 In 1600 the Clan MacAlister attacked the Clan Montgomery. They seized everything belonging to the Chief John Montgomery of Skelmorlie including £12,000 worth of possessions. Two years later, chief Archibald MacAlister along with Angus Og MacDonald carried out a similar attack on the inhabitants of the Isle of Bute against the Clan Stuart. A year afterwards Archibald MacAlister and Angus Og MacDonald were accused of being rebels, charged with treason and hanged in Edinburgh Tollbooth.

When the second Earl of Eglinton, chief of Clan Montgomery was released after the battle of Langside he had tried to secure the safety and toleration of Catholics in the wake of the Reformation. Ironically his daughter Lady Margaret married Robert Seton of the Clan Seton, the 1st Earl of Winton who was a loyal Covenanter during the Civil War.

The signature of the Earl of Eglinton in 1642.

Their son, Alexander Seton took his mother's maiden name of Montgomery and became the 6th Earl of Eglinton. He was a Protestant supporter of King Charles II. He was imprisoned by General Monck for his Royalist sympathies in 1659.

Another branch of the Scottish Montgomeries settled in Donegal in Ireland in 1628 and Viscount Montgomery of Alamein came from this line.

At the Battle of Worcester in 1651 much of the Royalist army was under the command of Major General Montgomery who was wounded in the action. 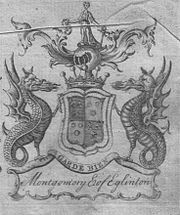 The 1764 coat of arms of the Montgomerys, Earls of Eglinton.

During the Jacobite Uprisings the Clan Montgomery supported the British government. The clan chief and 9th Earl of Eglington was on the Privy Council of King William and Queen Anne of the United Kingdom. In 1715 during the first rebellion the chief of Clan Montgomery, 9th Earl was involved in training soldiers for the government.

In 1736 John Montgomery moved to Sweden and was naturalized as a Swedish nobleman, this line of the family is still in existence today, some notable members include MP's in the Swedish parliament and ministers in the Swedish government.The estate Segersjö is in the family's possession.

The 11th Earl and chief of Clan Montgomery raised the British 77th Foot Highlanders Regiment from members of the clan. Their exploits in the campaign against the French are legend, and it was this regiment, under General Forbes, which renamed modern Pittsburgh. General Richard Montgomery was killed in the storming of Quebec on 31 December 1775. He was the first American general to die in the Revolution. He became a symbol of all that was finest in the leaders of the American Revolution. Many of the "Montgomery" place names which dot the nation honor his memory.

Perhaps the most famous of all Montgomerys was Field Marshal, Bernard Montgomery, 1st Viscount Montgomery of Alamein. He came from the direct line of Scottish Montgomerys who settled in Ireland in 1628. Among his honours are the Order of the Garter, Order of the Bath, a Distinguished Service Order, and membership of the Privy Council of the United Kingdom. He was a British Army officer, often referred to as "Monty". He successfully commanded Allied forces at the Battle of El Alamein, a major battle in World War II, and troops under his command were largely responsible for the expulsion of Axis forces from North Africa. He was later a senior commander in Italy and North-West Europe, where he was in command of all Allied ground forces during Operation Overlord and then until after the Battle of Normandy.