Clan Shaw of Tordarroch
Not to be confused with Clan Schaw.

Clan Shaw of Tordarroch is a Scottish clan. It is one of the member clans of the Chattan Confederation, who were led by the chiefs of Clan Mackintosh. 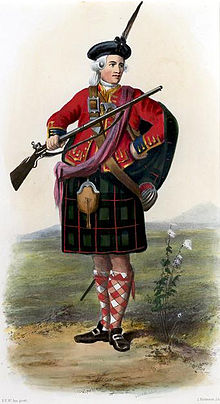 A Victorian era, romanticised depiction of Private Farquhar Shaw of the Blackwatch by R. R. McIan, from The Clans of the Scottish Highlands, published in 1845.

The Bloodline of the ancient and honorable Highland Family and Name of Shaw reaches back beyond the turn of the first millennia. Entwined via the Chiefs of Mackintosh and the Mac Duff Earls of Fife to the Kings of Moray and Fife, it descends from the crown of Scotland back to the Kings of Dal Riada to the ancient High Kings of Eire and to the blood royale of the Northern and Southern Kingdoms of the Cruitne-tuath, or the Picts. At that time, Alba or Albany (later called Scotland) was divided into seven kingdoms: Moray, Ath-fhotla, or Atholl, Fife, Cirech, Ce, Fortrenn and Strath-Cluaidh. The Ard-Righ na Alba, or High Kingship of Alba alternately revolved between two of the strongest and most prestigious royal houses of these kingdoms, of Atholl and Moray. Although closely related, these two houses were also rivals for the throne. [1]

The Thanes Of Fife

Our earliest ancestor was Aethelred, the first Earl of Fife. Aethelred, or in Gaelic: Aedh was the eldest son of Malcolm (III) Mac Duncan (also known as "Malcolm Ceann-Mhor"), High King of Alba. Aedh's royal sire was of the line of Kenneth Mac Alpin (died 858), the Dal Riadic King of Albany, who through his grandmother was also a claimant

to the High Kingship of the ancient Cruithne, earlier called Picts by the invading Romans. Now Aedh Mac Malcolm was made hereditary Abbot of Dunkeld, and because of his important ecclesiastical position, was barred from the throne (His younger brothers were Kings Alexander I and David I). In the Celtic "Culdee" Church, (a gentle blend of Christian and Druidic tradition) priests were allowed to marry and pass on their religious duties down to through their family lines. A leading personage in the kingdom, Aedh married the sister and heiress of Mael Snectai, the King of Moray. Mael Snectai was also the Chief of Clan Duff as grandson of Queen Gruoch (Gruoch was also the wife the good King Mac Beth, who was both the rightful king of Celtic Scotland, and one of the country's better monarchs), herself heiress of the line of King Duff, which was apanaged in the ancient 'Kingdom of Fife.' Aedh's father Malcolm III (who was raised in England since he was nine and later with English military assistance usurped Mac Beth's crown) was swayed by his own ambition and by the Norman and feudal influence of his new wife Margaret, herself a Saxon Princess in exile. "Ceann Mhor" altered the system of revolving kingship in Alba and (illegally) decreed that the High kingship would forever stay with his line, the House of Atholl. This is in opposition to the ancient Celtic laws Tanistry: whereby succession or election of the next king or chief is chosen from the best or most able person from within the derb-fine, or chiefly family. Queen Margaret also influenced her husband to encourage various 'reforms' at court: Norman French overGaelic, the abandonment of the ancient and noble Celtic Brehonic Laws – the oldest codified legal system in Europe. Margaret also forced the country's elite to begin to adopt the tenets of feudalism over tribalism. These personal, cultural and geopolitical moves did much to alienate the independent clans and tribes of Moray (formerly part of the Pictish Northern kingdom) against the central government. Aedh's son Duff Mac Aedh, predeceased his father, but not before having children of his own, Ghillemicheal and Constantine Mac Duff. After Aedh's death in 1128, the kingdom of Moray rose in several rebellions to rightly establish these two grandsons to the High Kingship of Scotland. Ghillemichael's son Duncan, 5th Toiseach (Gealic for Thane, Saxonised as Earl) or Earl of Fife was Regent of Scotland in 1153. The Mackintoshes and Shaws trace descent from Duncan's second son, Shaw Mac Duff. A scion of the royal derb-fine line of the King of Scots, the loyal Shaw Mac Duff rode north in 1160 with his cousin and friend Malcolm IV to calm the rising emotions and military gatherings of his rebellion minded tribal cousins in Moray. The Moraymen, unhappy with the gradual loss of their little kingdom's independence were calling for yet another rising against the King of Scots. Shaw Mac Duff ‘the Thane’ (an Toiseach) was made the Keeper of the Royal Castle at Inverness. Who better to settle down the local tribes of Moray than a grandson and great nephew of the men they once wanted as kings? His progeny, later called ‘Mhic an Toiseach’, grew in size and power, receiving possession of the lands of Petty and Breachley with the forest of Strathdearn in the valley of the Findhorn. Despite their remoteness, the Mackintoshes continued to loyally support the royal government down south.[2]

The Land Of The Wildcat

Shaw Mac Duff's grandson, Shaw Mac William acquired the strategically important lands of Rothiemurchus from the Bishopric of Moray in 1236. Rothiemurchus was part of the ancient Caledonian Forest. Part of it also consisted of the oft-flooded and very fertile Strathspey farmlands. Neighbored by the belligerent Clan Comyn, Shaw Mac William's son Ferquhard allied his little clan with the powerful Mac Donald Kings of the Isles. Strengthening this northwestern alliance, he married Mora, daughter of Angus Mhor, the Lord of Islay (the Lord or King of the Isles). During their son Angus's minority, the Mackintosh castles of Meickle Geddes and Rait were seized and held by Clan Comyn. In 1291, Angus Mac Ferquhard married Eva, daughter of Dougall Dall, 6th Chief of Clan Chattan, or "Clan of the Cats". The Chiefs of Clan Chattan descend from Ghillechattan Mhor (ca 1075), the Great Servant or Devotee of Saint Cattan, a descendant of the ancient Dal Riadic Kings of Lorne. Also loosely allied with the Mac Donald Kings of the Isles, 'old' Clan Chattan's original country was at Glenloy and Loch Arkaig, with its main tribal center at Torcastle. With this marriage, the Clan Chattan and Clan Mackintosh were intertwined into an even stronger and larger tribal Confederation, now Captained by the Chief of Mackintosh. Because of their feud with the Comyns over Rait and Meickle Geddes, Clan Chattan backed the Earl of Carrick, Robert the Bruce in his fierce dynastic struggles with the Red Comyn. Angus Mac Ferquhard was one of the Earl of Moray's chief officers at Bannockburn in 1314. He also raised a contingent of Clan Chattan confederation for the Scottish invasions of England in 1318 and 1319.[3]

'While the Clan Shaw families were consolidating in Rothiemurchus, Strathnairn and beyond, in 1524 the Chief of Mackintosh was murdered while hunting on the Findhorn, leaving his infant son William as Chief. To the outrage of the Clan Chattan Chieftains, the Earl of Moray forcefully acted as "custodial guardian" of little William. During the young Chief's captivity, his cousin Hector Mackintosh captained Clan Chattan. Our 7th Chief, Alan Ciar Mac Iain Mackintosh, was a very close friend and associate of Hectors. With his Mackintosh Shaws of Rothiemurchus, he and his kinsmen joined in Hectors retaliatory raids on the Earl of Moray's lands. In 1528, Hector and Alan Ciar supported the Earl of Angus, infamous captor of the boy-king James V. Because of these raids, and of the support of Angus, Alan Ciar was fined quite heavily for his "Treasonable Acts". Foiled in his attempts to capture the wily Hector, in 1531, the Earl of Moray raided Clan Chattan country, and summarily tried and hung 18 Mackintoshes from the rafters of the Tithe Barn at Tordarroch. Because of his fines, in 1539, Alan Ciar was forced to sell the feu of Rothiemurchus to George Gordon, son to the Earl of Huntly. Alan though, retained the life rent of the farm and lands of the Doune, which were passed to his young son James at Alan's death in 1542.

On 22, May 1543, a Clan Chattan Band was signed at Inverness by most of the tribes of Clan Chattan. As Chieftain of Clan Ay, the senior sept of the Mackintosh Shaws, Angus Mac Robert of Tordarroch signed on behalf of his southern cousin, then an infant Chieftain in Rothiemurchus. Meanwhile, from their castle at Freuchie, the powerful Chiefs of Clan Grant had long coveted and plotted to gain the rich Rothiemurchus timber and fertile Speyside farmlands to the south. On 14, July 1567, Iain Grant of Freuchie purchased the Deed of Rothiemurchus from the Earl of Huntly. In February two years later, Lachlan Mackintosh of Mackintosh wrote to the Chief of Grant that he wanted to repurchase his "own native country of Rothiemurchus for which sums of money as he gave for same". His entreaties to Grant ignored, the Mackintosh then threatened to raise the ten tribes of Clan Chattan against him, but to no avail. Indeed, the Mackintosh Shaws, greater Clan Mackintosh, and all of Clan Chattan did much to make life quite difficult for the Grants in Rothiemurchus and elsewhere for nearly twenty years. As the Grants harried and evicted the Shaws with sword and legal writ, the Shaws and Mackintoshes gleefully countered with retaliatory cattle lifting, the occasional assault and roof, grainery and crop burning.'[4]

By the time of the 1715 Jacobite Rising, the Shaws had lost Rothiemurchus to The Earl of Huntley of Clan Gordon who sold them shortly after to Clan Grant. The lands had been forfeited by the Crown following the murder of the Chief's stepfather, at the hands of the Chief. Shaw and the Chattan Confederation tried to have the lands restored, but were unsuccessful.

The surname Shaw has several different origins. The clan name is however derived from an Anglicisation of the Gaelic personal name Sitheach meaning "wolf".[5] The Gaelic names for the clan are Na Siach, or Mhic Sheaghd.