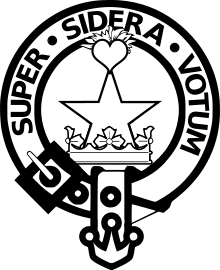 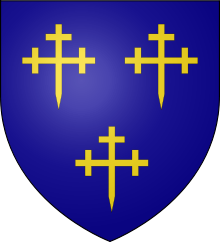 arms of the chief of Clan Rattray, The Rattray of Rattray

The name Rattray is derived from the barony of Rattray in Perthshire, Scotland. Legend has it that their land there was acquired from King Malcolm III of Scotland (Malcolm Cean Mór) in the 11th century. Unfortunately there is no extant written record of this. The Rattray estate includes a ruined Pictish fort which lies on a serpent shaped feature. This may explain why two serpants support the Chief's coat of arms.

There are various renditions of the name in early written records; Rathtreff in 1160, Rotref in 1291, Ratref in 1296, Rothtref in 1205, there are also various other renditions of the name including Rattra. (Nicolaisen, W.F.H 1976). The name is composed of two parts the first part is derived from the word rath, from both Gaelic and Cymric (modern Welsh or ancient British) meaning fortification; the second part Tref or Treb, Tray, from the Cymric (British) meaning settlement (Nicolaisen, W.F.H, 1976).

The first recorded Rattray was the laird Alan Rattray who is recorded as a witness on charters of King Alexander II of Scotland.

During the Wars of Scottish Independence Alan Rattray's grandson, Eustace Rattray led the clan, as chief at the Battle of Dunbar (1296) against the English. However, he was captured there and his son Adam Rattray swore an oath to King Edward I of England during the same year on the Ragman Rolls. The captured Eustace Rattray was later acquitted.

Confirmation by Robert the Bruce...of grants made to them (the abbot and convent i Cupar) of the lands of the two Drymeis within the tenement of Glenballach, which they have by gift of Adam of Glenballach, with the whole common of the same, which they have by gift of Eustace of Ratray and confirmation of the said Adam. 5 October 1309. [Breviarum Antiqui Registri Monasterij de Cupro in Anegus

"Sir Silvester Rattray succeeded his father in 1456. Silvester Rattray was appointed one of the Ambasidors extraordinair to treat with the Court of England, for which he obtained a safe conduct, dated 12 June 1463; in this document he is designated 'Dominus Silvester de Rattray miles'. His seal is appended to a Precept of Sasine of lands of Grauiche in the Earldom of Athole in favour of John Stuart of Fethinkile 26 March 1465. In about 1473 there is a security under his seal for Robert and Thomas Fif. In 1481 he sat in the parliament and was apparently very influential at court. Sir Silvester Rattray married Alison Hepburn, daughter of Alexander Stewart, Earl of Buchan (Wolf of Badenoch), bastard son of Robert III of Scotland, and left three sons and was succeeded by the eldest, John."

Thomas Rattray, Sir Silvester Rattray's 3rd son, obtained a charter for the lands of Monidie, Louston and Kinnaird in 1509, from George, Bishop of Dunkeld and was the ancestor of the Rattrays of Rannagulzion, Perthshire (Burke, 1963-72).

Chief John Rattray was knighted by King James IV of Scotland in 1488 but was killed leading the clan at the Battle of Flodden Field in 1513, fighting against the English, part of the Anglo-Scottish Wars. His eldest son was already dead leaving two daughters so the estate passed to his second son Patrick.

Patrick was intimidated into giving up the Barony by John Stewart, Earl of Atholl. Through the marriage of Patrick’s niece into the family, the Earl took control of the Barony of Rattray and also took control of her sister. Thus Patrick was driven from his estate in 1516. He began the construction of Craighall Castle [1] a grand building perched on a 200 feet rock above the River Ericht. The stronghold of Craighall could not protect him from John Stewart the Earl of Atholl though and he was murdered in 1533.

Sir John’s son Patrick defended Craighall Castle, also known as Rattray Castle against the Clan Stuart Atholls but was forced to burn the Castle and escape in the confusion. The Rattrays then withdrew to Kynballoch, where Patrick was later murdered by the 3rd Earl of Atholl’s men whilst claiming sanctuary in his own Chapel.

In 1572 David Rattray of Craighall (d.1586) killed two men in a fight with some men from the Clan Rollo, but was relieved of responsibility on payment of a fine of 500 merks. [2]

Sir John’s third son Silvester succeeded his murdered brother, Atholl continued to intimidate the family however and Silvester petitioned the king for legal recognition as heir. He was succeeded by his son, David Rattray of Craighall. George The laird’s eldest son was also murdered in 1592 and another Silvester, his son, succeeded him.

Chief Silvester Rattray died in the year 1612, leaving three sons. The eldest David became chief and the clan fought for King Charles I during the Civil War. The youngest was captured after the defeat of Charles II in 1651 at the Battle of Worcester and was incarcerated in the Tower of London.

However Patrick Rattray was successful in uniting the barony of Kinballoch with Rattray and their other associated parishes into one free barony of Craighall-Rattray. This charter also claimed back Rattray the land which was seized by the Earls of Atholl, including the Rattray's Craighall Castle.

Patrick’s son, John, was an Edinburgh surgeon and keen sportsman, who won the first competition of the The Honourable Company of Edinburgh Golfers held in 1744, becoming club captain and the signratory of the first known rules of golf. He then became physician to Charles Edward Stewart, the Jacobite leader. He was with him throughout the Forty-five and was captured after the Battle of Culloden in 1746, but was fortunately reprieved by the intervention of a fellow golfer.[1] The twenty-second and twenty-third Lairds died without issue, and the estates passed to a cousin, James Clerk Rattray, sheriff depute of Edinburgh. He was a good friend of Sir Walter Scott who modelled "Tully-Veolan" the Baron of Bradwardine's castle in "Waverley" on Craighall.

James Rattray of Rannagulzion was commissioned as a major of foot in the Atholl brigade in the 1745 uprising. See commission into Prince Charles's army as a Major of foot in Tullibardines regiment National Library of Scotland. Served in the Ogilvie regiment,(Livingstone, et al. (Eds),1984). He was married to Jean, daughter of Sir James Kinloch of that Ilk 2nd Kinloch of Kinloch Bart.

Col. Thomas Rattray, C.S.I., C.B., B.S.C. (a Rattray of Rannagulzion) Commanded the Viceroy's cavalry and raised a police battalion in 1856, which distinguished itself throughout the Indian mutiny. The battalion maintain their battles honours and name as the 3rd battalion the Sikh regiment (Rattray's) in the modern Indian army. (McRae, H.St.G.M., 1933)

The family seat is at The Bonningtons-Rattray. [3] [4]