Not to be confused with the Irish Kennedy Clan.

Clan Kennedy is a Scottish clan and an Irish surname.

The Kennedys had their home territory in Carrick in Ayrshire, in southwestern Scotland. Originally they were of Pictish/Norse stock from the Western Isles. In the fifteenth century, one Ulric Kennedy fled Ayrshire to Lochaber in the Highlands for refuge, where he was granted protection under the Chief of Clan Cameron. From this Highland branch, Kennedys settled on the Isle of Skye. A branch also was established in northeast Scotland, at Aberdeen. The clan was one branch of the Celtic Lords of Galloway.

The Kennedys of nine-county Ulster, in the north of Ireland, are mostly of Scottish origin from the territories of Galloway and Ayr just across the Irish Sea 20 miles away. Many Scottish Kennedys were planters in Ulster, and many Scots went south to Dublin and mingled with the Irish clan.[citation needed] 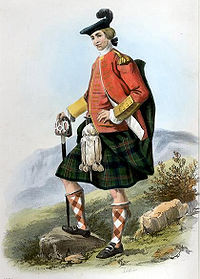 "Ulric". A Victorian era, romanticised depiction of a member of the clan by R. R. McIan, from The Clans of the Scottish Highlands, published in 1845.

The Clan Kennedy supported King Robert I of Scotland before and through the Wars of Scottish Independence and were rewarded. Around 1360 John Kennedy became owner of lands at Cassillis and in 1457 his descendant, Gilbert, was created Lord Kennedy. Gilbert's younger brother James was Bishop of St Andrews and founder of Scotland's first university, the University of St Andrews.

During the Anglo-Scottish Wars the Clan Kennedy led by their Chief who was the 1st Earl of Cassillis fought at the Battle of Flodden Field in 1513 where the Chief was slain.

The death warrant of Scotland's first Protestant martyr, Patrick Hamilton, was signed, under pressure, by the 3rd Earl, Gilbert, when twelve years old. He was poisoned at Dieppe and the Earldom went to another Gilbert, celebrated for roasting the Abbot of Crossraguel slowly over a fire to gain his land. The Abbot was saved by the Kennedys of Bargany but not before being horribly crippled.

In 1775 the 10th Earl of Cassillis was David, who commissioned Robert Adam to build the stunning Culzean Castle. The half gothic, half classical masterpiece looks across the Firth of Clyde to the Ailsa Craig and was offered for use as a retreat to U.S. General Dwight D. Eisenhower in gratitude for his war achievements.

Base of Scottish Family Tree

Here is the base of the family tree:

The tenth Kennedy Earl commissioned Robert Adam to build the Culzean Castle, which became the seat of the Kennedy Clan.

The twelfth Kennedy Earl was created Marquess of Ailsa.