As a surname Irvine is of territorial origins from one of two places of the same name. Firstly from Irving, an old parish in Dumfriesshire and from Irvine in Ayrshire. 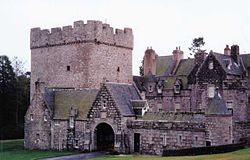 Drum Castle was the seat of the chief of Clan Irvine

The Clan Irvine were often at feud with the neighbouring Clan Keith. Both clans invaded each others' lands. In 1402 the Clan Irvine are said to have slaughtered an invading war party of the Clan Keith at the Battle of Drumoak.[citation needed]

Sir Alexander de Irwine engaged in single combat or a duel with the chief of Clan MacLean of Duart who was known as "Hector of the Battles". After a legendary struggle both died of the wounds inflicted upon each other.[citation needed]

The sixth Laird of Drum and chief of Clan Irvine was rewarded by King James V of Scotland for his efforts to suppress rebels, thieves, reivers, sourcerers and murderers in 1527.[citation needed]

During the Anglo-Scottish Wars the sixth Laird's son was killed when the clan fought against the English at the Battle of Pinkie Cleugh in 1547.[3]

In 1571 the Clan Irvine joined forces with the Clan Gordon in their feud against the Clan Forbes. The Clan Leslie and Clan Seton also joined the Gordons and the Clan Keith, Clan Fraser and Clan Crichton joined forces with the Clan Forbes. The feud had carried on for centuries and culminated with two full scale battles in 1571: The Battle of Tillieangus and the Battle of Craibstone. It was at the Battle of Tillieangus that the 6th Lord Forbes's youngest son known as Black Aurther Forbes was killed. Legend has it that "he stooped down to quench his thirst and one of the Gordons gave him his death blow through an open joint in his armour".[citation needed]

Alexander Irvine the tenth Laird of Drum was a staunch Royalist and supporter of King Charles I. He was sherriff of Aberdeen and was offered the Earldom of Aberdeen, but the King was executed before the grant could be confirmed.[citation needed]

The Clan Irvine's castle, Drum Castle became a royalist stronghold in a predominantly Covenanting district. It became an obvious target. A strong force led by General Robert Monro (d. 1680) of the Clan Munro with artillery surrounded the castle. Lady Irivine defended the castle for two days before it was surrendered in June 1640. The castle was then looted.[citation needed]

Drum Castle was again sacked on 2 May 1644 by the Clan Campbell. A chair with Drum symbols is now in the Scottish Museum, Edinburgh, believed to have been taken from Drum either in 1640 or 1644.[citation needed]

The tenth Laird's sons also led the clan during the civil war and both were captured: Robert, the younger son died in the dungeons of Edinburgh Castle. However his brother Alexander was set free after Montrose's victory at the Battle of Kilsyth in 1645. Soon after Drum Castle was again sacked and looted.[citation needed]

Alexander survived the war to succeed his father as the eleventh Laird of Drum.[citation needed]

The title of 'Viscount Irvine' was created in 1631 for Henry, son of Sir Arthur Ingram from an English family who had no connection with the Irvine family in Scotland. This line became extinct on the death of the 9th Viscount in 1778.[citation needed]

The title of Earl of Irvine was created in 1642 for James Campbell the eldest son of the chief of Clan Campbell who was the Earl of Argyll by his second marriage. However this was one of the shortest lived titles as three years later the Earl of Irvine died leaving no successors.[citation needed]

During the Jacobite Uprisings the Clan Irvine led by their chief, the 14th Laird of Drum supported the House of Stuart and the Jacobite cause. He led the clan at the Battle of Sheriffmuir in 1715 where he received a severe head wound. He never recovered and died after years of illness leaving no direct heir.[citation needed]

The chieftainship and estates passed to his uncle, John Irvine and then passed to a kinsmen called John Irvine of Crimond. The seventeenth Laird of Drum led members of the clan at the Battle of Culloden in 1746. The Laird only escaped capture by hiding in a secret room in Drum Castle. He spent several years in exile in France, before being allowed to return to his estates.[citation needed]

During the 19th century, most of the Lairds of Drum worked as lawyers and served as Sheriffs in various parts of Scotland.[citation needed]

Alexander Irvine, the 22nd Laird was badly wounded during World War I. He fought in the Grenadier Guards in France in 1916 and died in 1922. His first son took over as Laird but died aged just 33. His second son then became Laird of Drum and fought in World War II. He was in the King's African Rifles in East Africa. On his death in 1975 Drum Castle and the surrounding land passed to the National Trust for Scotland. He was succeeded by his younger brother Col. Charles Irvine M.C who also fought in World War II in the Gordon Highlanders.[citation needed]

In 2002 the Chief of Clan Irvine entered into a peace treaty with the 13th Earl of Kintore who is the Chief of Clan Keith at an elaborate ceremony on the banks of the River Dee to end their 600 year feud.[citation needed]