Clan Mackintosh (Clann Mhic an Tòisich) is a Scottish clan from Inverness with strong Jacobite ties. The Mackintoshes were also chiefs of the Chattan Confederation.

Seathach, son of Donnchadh Mac Duibh, accompanied King Malcolm IV of Scotland to Morayshire to suppress rebellion in 1160. In 1163 he was granted land in the Findhorn valley and made constable of Inverness Castle. Upon Seathach's death in 1179, his son, Shaw the second became chief and was confirmed by William I of Scotland the Lion.[1]

Probably the earliest authentic history of Mackintosh is traceable to Shaw or Search Macduff, a cadet son of the third Earl of Fife. The son of Macduff, for his support of King Malcolm IV, was awarded the lands of Petty and Breachley in Invernesshire and was appointed Constable of the Castle thereto. Assuming the name Mac an Toisich which means "son of the toisech ['thane']" or "son of the Chief", he became the progenitor of his own clan.[1]

Chief Aonghas Mac an Toisich later supported Robert I of Scotland during the Wars of Scottish Independence. He led the Clan Mackintosh at the Battle of Bannockburn in 1314 where the English were defeated. He is placed second in the list of chiefs given by General Stewart of Garth as present in this battle. 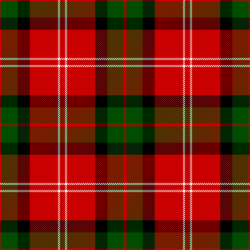 Clan Mackintosh were involved in many clan battles mostly against Clan Cameron with whom they had an extensive feud which lasted over 350 years:

The Battle of Craig Cailloch was fought in 1441: Clan Mackintosh, at the instigation of Alexander, Lord of the Isles, began to invade and raid the Clan Cameron lands. A sanguinary conflict took place in this year at Craig Cailloch between the Camerons and the Mackintoshes in which Mackintosh's second son, Lachlann "Badenoch" was wounded and Gille Chaluim, his brother, killed.[8]

The Battle of Clachnaharry, was fought in 1454, fought between the Clan Mackintosh and the Clan Munro led by John Munro of Milntown.[9]

The Raid on Ross took place in 1491: a conflict that took place in the Scottish Highlands. It was fought between the Clan Mackenzie against several other clans, including the Clan MacDonald of Lochalsh, Clan MacDonald of Clanranald the Clan Cameron and the Chattan Confederation of Clan Mackintosh. They then proceeded to Inverness where they stormed the Inverness Castle and Mackintosh placed a garrison in it.[10]

The Battle of Bun Garbhain was fought in 1570 between the Clan Cameron and Clan Mackintosh. Domhnall Dubh Camshròn, XV Chief of Clan Cameron, had died, leaving an infant son, Ailean, at the head of the clan. During the battle the chief of MacKintosh is believed to have been killed by Donald 'Taillear Dubh na Tuaighe' Cameron, (son of the XIV Chief of Clan Cameron), with a fearsome Lochaber axe.[11] In 1592 the Clan Mackintosh captured and destroyed Auchindoun Castle in Auchindoun near Dufftown which then belonged to the Clan Cochrane. The castle later passed to the Clan Ogilvy.

The Battle of Glenlivet was fought in 1594. The Clan Mackintosh and Chattan Confederation fought on the side of the Earl of Argyll along with Clan Campbell, Clan Stewart of Atholl and Clan Forbes. They were defeated by the Earl of Huntly's forces which consisted of Clan Gordon, Clan Comyn and Clan Cameron.[12]

During the Civil War of the 17th century the Clan Mackintosh were staunch royalist supporters of the King. They fought in the royalist army which was commanded by James Graham, 1st Marquess of Montrose.

The Stand-off at the Fords of Arkaig took place in 1665 between the Chattan Confederation led by the Clan Mackintosh against the Clan Cameron.[13] The Battle of Mulroy was fought in 1668, Clan Cameron and Clan Mackintosh were at peace and Cameron Chief Sir Eòbhann was responsible for keeping the peace between his men and their former enemies. However, when the Chief Sir Eòbhann Camshròn was away in London a feud broke out between Clan MacDonald of Keppoch and their enemies Clan Mackintosh and Clan Mackenzie. As the Cameron Chief was away he was not able to hold back his clan and the combined forces of Cameron and MacDonald defeated the Mackintoshes and Mackenzies.[14]

18th century and the Jacobite uprisings

By the time of the 1745 rebellion Angus Mackintosh, the chief of Clan Mackintosh, had become a company commander in the British Black Watch regiment. While he was away on duty his wife, Lady Anne Farquharson-MacKintosh rallied 350 men of the Clan Mackintosh and Chattan Confederation to the Jacobite standard at the Battle of Culloden in April 1746. Angus was captured at the Battle of Prestonpans and was paroled to his wife. She famously greeted him with the words, "Your servant, captain" to which he replied, "your servant, colonel" thereby giving her the nickname 'Colonel' Anne

At Culloden, the Mackintosh Clan was the first to charge the British troops. They broke through the first two ranks, but then found themselves trapped behind the lines. Almost all of the Mackintosh warriors were killed.

The present Chief is John Lachlan Mackintosh (born 1969), formally styled as The Mackintosh. The Mackintosh has been Chief since 1995 and currently resides in Singapore, being Head of History in the Humanities Faculty at Nanyang Girls' High School.