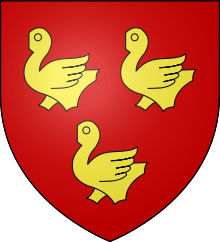 Arms of Cairns of that Ilk.

Clan Cairns is a Scottish clan. The clan does not have a chief recognised by the Lord Lyon King of Arms, therefore the clan has no standing under Scots Law. Clan Cairns is considered an armigerous clan, meaning that it is considered to have had at one time a chief who possessed the chiefly arms, however no one at present is in possession of such arms. The arms of Cairns of that Ilk are blazoned as: Gules, three martlets Or.[1]

The surname Cairns is derived from the Scottish Gaelic carn, meaning "cairn". It is a topographic name for someone who lived near a cairn.[2] The lands of Cairns are located in the parish of Mid Calder, near Edinburgh.[3] According to George Fraser Black, the first Cairns to be recorded is William de Carnys, who was recorded as witnessing a charter in 1349. William de Carnys and his son Duncan held the baronies of Easter and Wester Whitburn. Many Cairns are also recorded in the counties of Midlothian and West Lothian. Today many Cairns are still located around Edinburgh and Glasgow.[1]