Clan Armstrong is an armigerous clan whose origins lie in Cumberland, south of the frontier between Scotland and England which was officially established in 1237.

The Clan is currently represented globally by the official Clan Armstrong Trust in the Scottish border region. The President of the Armstrong Clan Trust is Micheil Armstrong of Mungbyhurst CA,FCI,FSA SCOT, KLJ. The Clan Trust has a museum in Langholm, Dumfriesshire, which holds the biggest archive of Armstrong history in the world. Clan meetings take place each summer with a formal gathering every second year.

The Armstrong name has a legendary origin in traditional oral history and folklore, in that it is said their heroic progenitor, Fairbairn, the standard-bearer and squire to the King of Scotland, saved his master in battle, and not from a wild beast as is the case with another Border Clan - the Turnbulls. It is said that he lifted the King , who was dressed in full armour, onto his own horse with one arm after the King's horse had been killed under him in battle.[1][2] The family crest, an upraised and embowed arm with a grasping hand, records this act of heroism that was said to have been rewarded with a heritable title (Sir Strong Arm, Anglicised to Armstrong) and a grant of lands in the Borders region..

The first existing written reference listing them in the region is from a 1236 Carlisle court record of one Adam Armstrong being pardoned for killing a man. The first existing reference specifically locating them in Liddesdale in Roxburghshire, which would become their family seat, is in 1376. Liddesdale was also the seat of their unquestioned power in the region. That allowed them to expand into Annandale and Eskdale to accommodate their growing population. It is reputed that by 1528 they were able to put 3000 horsemen in the field.

The Armstrongs' relationship with subsequent Scottish kings was turbulent, to say the least. The most notorious event in this uneasy relationship occurred in 1530. John Armstrong, known in history as 'Gilnockie Johnie', was persuaded by a Royal writ of safe passage to attend a meeting at Caerlanrig with King James V who, unknown to Gilnockie, had the malicious intent to silence the rebellious Borderers. The ruse succeeded. Gilnockie and fifty of his followers were captured in direct violation of the safe conduct.

A Royal order to hang them was issued, again in violation of James' own writ of safety, and despite several pleas for the King to be lenient in exchange for obedience, it was carried out. Defiant to the last, Gilnockie said these words directly to King James V:

"I am but a fool to seek grace at a graceless face, but had I known you would have taken me this day, I would have lived in the Borders despite King Harry and you both." His defiance is commemorated and echoed in the soulful popular Border ballad, "Johnie Armstrong":

"Farewell! my bonny Gilnock Hall
Where on Esk side thou standest stout !
Gif I had lived but seven yeirs mair
I wad a gilt thee round about
John murdered was at Carlinrigg
And all his gallant companie;
But Scotland's heart was ne'er sae wae
To see sae mony brave men die."

This murderous act by James V inflamed the Borders region. Far from pacifying, it caused all the Border Clans to question their allegiance to a King who would not honor his own writ of safety. In 1542 at the Battle of Solway Moss, none of the Armstrongs or their allies came to assist James' forces. The Moss was the playground of the Armstrongs, and they knew every inch of it and used it as a safe retreat for themselves and their families for centuries. Those of James' forces who tried to use it so fell into the bogs and were drowned. The rest were cut to ribbons by the English. 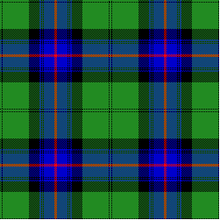 In 1587 an act was passed by the Scottish parliament "for the quieting and keeping in obedience of the inhabitants of the Borders, Highland and Isles ..." That contained a roll of Chieftains and Clans that confirms the status of Border families as an important part of Clan history, and the Armstrongs as perhaps the most significant Border Clan. The entry began, "On the border were the Armstrongs, brave men, somewhat unruly, and ill to tame ..."

The Clan's authority resided intact at Mangerton in Liddesdale, a succession of Armstrongs retaining the title of the 'Laird of Mangerton', until 1610 when Johnny Armstrong was 'put to the horn' and hanged as a rebel. His son is reputed in local lore to have disappeared into English Cumbriashire, never having inherited his father's title. After this, the Armstrong lands passed into the hands of the Scotts.[3]

On 16 June 1600, members of the clan ambushed and murdered Sir John Carmichael, warden of the Scottish West march on his way to a warden court at Langholm.[4]

Following the death of the last chief of Clan Armstrong, members of the family dispersed in a diaspora. Some Armstrongs moved to Northern Ireland, some of whom became soldiers. Others moved farther south into Northern England. One branch even relocated to the Netherlands. Others subsequently moved to America and other British colonies.[citation needed]

At least one branch of the Armstrong family relocated from the Borders to Ireland and then to America. The Revolutionary War American General John Armstrong, who came to Pennsylvania as a surveyor for the Penn family, was a representative of this branch of the family. Armstrong descendants would subsequently scatter across many states of the Union.[citation needed] 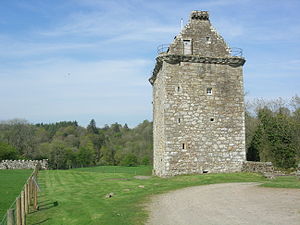 Gilnockie Tower is a home of the Clan Armstrong line and houses information related to the Clan.

It is unknown if any of the early Armstrongs spoke Gaelic, but the language persisted in Galloway, Carrick and the Western Borders well into the seventeenth century, so it is not impossible.[8] The Armstrong name is sometimes rendered in Gaelic as follows:

These Gaelic names appear frequently in modern clan literature, but they are neologistic and are rarely used by Gaelic speakers. However, Armstrong has been historically associated with the Ulster Gaelic name, Mac Tréan-Labhraidh, a branch of the Ó Labhradha family. Tréan-Labhradh means strong-speaking but it is thought that the name was misunderstood as meaning strong-arm, and Armstrong was adopted as a convenient Anglicization.[9] Mac Tréan-Labhraidh would translate as Mac Treun-Labhraidh in Scottish Gaelic.

Among the best-known Gaelic-speaking Armstrongs was Dr Robert Armstrong of Perthshire, who compiled an authoritative early Gaelic-English dictionary, published in 1825.[10]

The Armstrong Family Motto appears in several forms, most commonly as Invictus maneo (I remain unvanquished) The complete motto is Vi et armis invictus maneo (Through/by the force of arms I remain unconquered)

This tartan is from the Lowlands and is mentioned in Vestiarium Scoticum (1842).