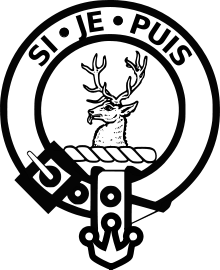 A crest badge suitable for a member of Clan Colquhoun

Clan Colquhoun is a Highland Scottish clan. The clan motto shown above in the crest best translates to "if I can."

In the 13th century Maol Domhnaich, Earl of Lennox granted the lands of Colquhoun,[1] located in Dunbartonshire, to Humphry de Kilpatrick. Humphry’s son, Ingelram de Colquhoun, who lived in the reign of Alexander III, was the first person recorded as taking Colquhoun as a surname.[2] Around 1368, Luss, on Loch Lomond, was acquired by Sir Robert Colquhoun through marriage. From then on the chiefship has been described as of Colquhoun and Luss. His grandson Iain Colquhoun of Luss married Margaret, the daughter of the Earl of Lennox. When James I returned from English imprisonment a few years later in 1424, one of the people he took his vengeance upon was the unsupportive Lennox. Lennox's position was devastated, and Iain of Luss took advantage of this to win the King’s favour by capturing Dumbarton Castle from Lennox. By 1427 he was Sheriff of Dumbarton and by 1439 he was dead, like his King, killed by those he had treated so badly. By way of compensation, James II made Luss a free barony for Colquhoun’s grandson Sir Iain. It remained this way until the 1745 Jacobite rising.[3]

In 1424 the Clan Lennox was decimated and Iain Colqhoun of Luss took advantage of this to win the King's favour by capturing Dumbarton Castle from Lennox.

Sir John Colquhoun of Luss was appointed governor of Dumbarton Castle during the minority of King James II of Scotland, and was murdered in 1439 during a raid at Inchmurrin. He was succeeded by his son, also Sir John, who rose to be Comptroller of the Royal Household, and extended considerably the family estates.

In 1457 he received a charter incorporating all his lands into the free barony of Luss. The forests of Rossdhu and Glenmachome together with the lands of Kilmardinny, followed a year later. In 1474 he was part of the embassy to King Edward IV of England, seeking to negotiate a marriage between the infant James IV and Edward’s daughter, Cecilia. He fought at the siege of Dunbar Castle, held by rebels against the king, where he was killed by a cannonball.

The Clan Colquhoun were among the clans who fought against the English at the Battle of Pinkie Cleugh in 1547, where the Colquhoun chief was killed. Clan chiefs from Clan Hunter, Clan Macfarlane, Clan Munro and Clan Farquharson also died at this battle. A good clan chief was expected to lead by example; this meant being first into battle at the head of the clan. For this reason many clan chiefs died during battle. Because of the awful number of Scottish lives lost at the Battle of Pinkie the 10 September is known in Scotland as 'Black Saturday'.

The Battle of Glen Fruin saw Luss invaded by the Clan Gregor in 1603 and the defeat of five hundred Colquhoun men, three hundred of whom were on horseback, by four hundred MacGregor men. Over two hundred of the Colquhoun men were lost when the MacGregors, who had split into two parties, attacked from front and rear and forced the horsemen onto the soft ground of the Moss of Auchingaich. It meant the proscription of the Clan Gregor. It wasn’t until the 18th century that the enmity between the clans was interred when, at Glen Fruin on the site of the massacre, the chiefs of the Clan Gregor and Colquhoun met and shook hands.

Though throughout the internet, identified as the Eleventh Laird of Luss, it was the Sixteenth Laird of Colquhoun and Eighteenth Laird of Luss, Sir John Colquhoun,[4] who became a baronet of Nova Scotia in 1625. William Fraser provided a wonderful genealogical tree of the Colquhoun and Luss lineage, which reflects the same. It is entirely proper to point out that whereas his work was commissioned by the then 'current' Laird of Luss, Sir James Colquhoun, twenty-six of Colquhoun and twenty-eighth of Luss, some instances of history seem to have been deemed 'unnecessary to elaborate upon' such as the one following, however the descendant lines of the two houses appears correct and clearly points to the Eighteenth Laird of Luss being the first Baronet of Novia Scotia. Seven years later, however, he vanished along with Lady Catherine Graham, his wife’s sister. He was accused of using witchcraft and sorcery to woo her and never returned to clear his name.[5] On that subject Fraser was absolutely and completely evasive.:

Sir Humphrey Colquhoun, fifth Baronet, represented Dunbartonshire in the last Scottish Parliament in 1703, and strongly opposed the Treaty of Union. On 30 March 1704, having no male heir, he resigned his baronetcy to the Crown and obtained a new patent, allowing the title to pass on his death to the male issue of his daughter’s husband, James Grant of Pluscardine. When Pluscardine’s elder brother died, he succeeded to the substantial estates of his father and once more assumed the name of Grant. He was ancestor of the Earls of Seafield and the Barons Strathspey, on whom the baronetcy devolved. Sir James Grant Colquhoun, fourth son of James Grant and Ann Colquhoun, succeeded to the Colquhoun estates, and built the grand mansion of Rossdhu which was until recently the seat of the chiefs.[5]

William Colquhoun was a Scottish Covenanter soldier who fought against Oliver Cromwell's Parliamentarians at the Battle of Dunbar. William and his brother John were both captured, and both were sent to America as a servants.

William gained his freedom and became a bricklayer on Cape Cod. William found that the name Colquhoun is too long to put on a brick and changed it to Cahoon. He was married and had children. One day he was hired to ambush a group of Pequot Indians harassing a town during King Philip's War. Settlers found his body riddled with arrows and William's head on a pole as a sign of war. The wife remarried and moved down to Georgia with the younger sons and changed their names to Calhoun. The older ones stayed on Cape Cod and later owned a portion of Long Pond near Brewster, Massachusetts.[citation needed]

John Cowen was born Abt. 1636 in Scotland, and died Bet. 1697 – 1703 in Scituate, Massachusetts. He married Rebecca Short 31 March 1656 in Scituate, Massachusetts 1 . Notes for John Cowen: An application to join the Sons of the American Revolution, by Benjamin Rush Cowen, approved 14 February 1896, stated that John Cowen came from Edinboro, Scotland, to Scituate, Massachusetts in 1656. There are no records to support this claim, however, and most researchers believe that John arrived in Boston in February 1652 aboard the ship "John & Sara." The ship's passenger list included 261 Scots who had been taken prisoner by the British (Oliver Cromwell's forces) at the Battle of Worcester on 3 September 1651. One of the Scots on the passenger list was John Coehon (Colquhoun) and it is generally thought that it was this man who appears in Scituate town records as John Cowin/Cowen. The Scottish prisoners were marched from Boston to Lynn, Massachusetts, to work for the owners of the Lynn Iron Works as indentured servants for a certain number of years. However, most were resold to various planters and mill owners throughout the Colonies. After the period of indenture, these Scots became free men. The first record of John Cowen in Scituate, MA was his marriage to the widow Rebecca Mann in 1656. The following year (1657) John took the "oath of fidelitie" and became a "Freeman." Qualifications for this required that a man must be a church member, orthodox in his religion, and not vicious in his life. At that time the First Parish Church of Scituate was the only accepted one in the community, so it is assumed that John was a member of that church. However, the churches of Scituate and Barnstable maintained no regular records at that time and the handwriten manuscript of the pastor makes no mention of any Cowen, Cowing, or Mann. In 1670 John built on land he had purchased in Connihassett, north of Sweet Swamp and east of Michael Pierce's farm, in the area known locally as Egypt. This name was humorously applied to the area as the land of corn and plenty when other areas were not so blessed with abundance. Subsequently, John's name appeared in several court records. The records of 1660 show that John Cowen was fined 10s for refusing to assist the marshall in the execution of his office. On 5 October 1665, John—with Apt. James Cudworth—gave a bond for the benefit of the Mann children "until they shall come to attaine the age of twenty one years." Then on 8 March 1671, he appeared "being bound ouer to answer for speaking of contemptable words against royal authorities, in that hee should say that hee scorned to be in subjection to any English Man and that there were never any kings in England, but one crooked backed Richard, a crooked rogue, just like one hee named, a crooked man well known in the town of Scituate *** it was deferred until the June court next and the said Cowin to be kept in durance vile till then." At the June court the jury brought him in—not guilty. In his history of Scituate, Dean called this a "curious evidence of his Scottish Spirit." Records of the deaths of John and Rebecca have not been found. John probably died after 17 December 1697 (when land granted to John by the town of Scituate was laid out) and before 27 September 1703 (when his son Israel sold this land).

Descendants of John Cowing now go by the name Cowen, they live in Massachusetts(Fall River, New Bedford) and Texas(San Antonio).