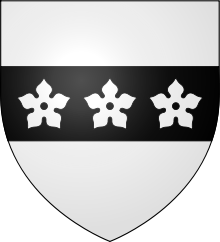 Coat of arms of the last Laird of family Boswell

Family Boswell is a Lowland Scottish family. As the Boswells are a family and a member of the aristocracy they do not have a chief. The family is represented by a Laird Scottish term for Lord.

Origins of the Family

The Family Boswell are accepted as of Norman or French origin, Black offers two derivations of the name – either from a vill, or manor, near Yvetot in Normandy, or from Beuzevill near Bolbec. The ‘sieur’, or Lord de Bosville, is said to have been one of the Norman commanders at the Battle of Hastings in 1066. Robert de Boseuille witnessed several charters in the reign of William the Lion and it must be presumed that the Boswells were among the knights who accompanied King David I of Scotland back to Scotland after his stay at the English court.

During the Wars of Scottish Independence Chief Walter de Bosville was taken a prisoner at the Battle of Dunbar (1296) and William de Bosville rendered homage in the same year to King Edward I of England. His son, Richard, later received land from King Robert the Bruce of Scotland near Ardrossan. A younger son of the Borders family is said to have been the first to settle in Fife, marrying Mariota, daughter and co-heiress of Sir William of Lochore. The family acquired the barony of Balmuto, which they held until the early eighteenth century.

During the Anglo-Scottish Wars of the 16th century Chief Sir Alexander Boswell of Balmuto led the Family Boswell at the Battle of Flodden Field in 1513 where he was slain.

Many Boswells fell fighting for the royalist cause at the Battle of Worcester during the civil war in 1651. The Boswell family married into the family of Auchinleck, through one of the daughters of Sir John Auchinleck of that Ilk, and adopted the style 'of Auchinleck'. The Auchinleck family had had a major feud with the Clan Colville in the 15th century. The Boswells acquired the lands of Auchinleck and were to become lawyers of great eminence. Robert Boswell became a High Court judge, assuming the title of ‘Lord Balmuto’.