The name MacDowall is a name connected with the ancient history of Galloway, a district in the south west of Scotland which took its name from the Gall-Gaidhel settlers of the seventh and eighth centuries. The area was settled by the Scotti or Irish Gaels during the invasions of the fourth century (Scotus was the Roman word for Irishman) pushing the native Picts further East. The area was then settled by Norwegian Vikings in the seventh century who merged with the Irish Gaelic Clans. Many legends exist in Galloway including the legend that Dovall of Galloway killed Nothatus the Tyrant in 230 BC. It is also said that the Royal House of Galloway resisted the Romans. The name MacDowall is generally accepted to mean "Son of Dougal" due to the transliteration of the "ug" in Dougall to "w" in Dowall, introduced under Edward I of England because of the difficulty incurred by the English in pronouncing the Gaelic version. MacDowall was later referred to as MacDowell, with the introduction of the Irish spelled "e".[2] Related family names are MacDougall, Doyle, O'Doyle, O'Doill and O' Dubhghaill.

The Lords of Galloway were very powerful. They scattered their ancient princedom with well endowed abbeys and priories.[3] The last of the native Lords of Galloway, Allen died in 1234. His daughter Dervorguilla married John Balliol, 5th Baron de Balliol, a member of the Balliol family who were lords of Barnard Castle. Their son, John, claimed Galloway through the right of his mother. He also claimed the throne of Scotland.

Balliol, Lord of Galloway had granted lands in Garthland to 'Dougal', a descendant of King Somerled and Fergus MacDoual, Balliol's own relation.[citation needed] These two men both appear on the Ragman Rolls of Scottish nobles who swore fealty to king Edward I of England. Dougals's grandson Fergus, third of Garthland was sheriff depute for Kirkcudbright during the reign of King David II of Scotland.

Uchtred MacDowall the 9th of Garthland married Isabel Gordon. During the Anglo-Scottish Wars Uchtred Macdowall led the Clan MacDowall at the Battle of Flodden Field in 1513 against the English where both he and his son Thomas MacDowall were killed.[4]

John MacDowall the 11th of Garthland led the Clan MacDowall against the English at the Battle of Pinkie Cleugh in 1547.[5]

Uchtred MacDowall the 12th of Garthland was among those who were involved in the "Ruthern Raid" in 1582 led by the Clan Ruthven in which the young King James IV of Scotland was kidnapped and held at Ruthven Castle and later Edinburgh Castle.

Today, Fergus MacDowall of Garthland is the Chief of the Name and Arms. The caput baroniae is at Garthland Mains on the Rhinns of Galloway. The present seat is at Barr Castle, Garthland, Lochwinnoch, Renfrewshire.[6] 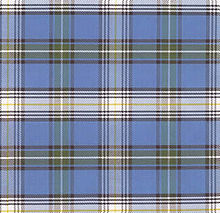