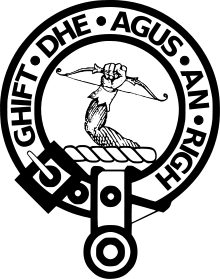 Crest badge suitable for wear by members of Clan MacInnes.

Clan MacInnes is a Scottish clan from the highlands. As there is currently no clan chief, it is currently regarded as an Armigerous clan.

The tartan of the MacInnes Clan

The dress tartan of the MacInnes Clan

From the Gaelic MacAonghais (Sons of Angus). Mac or Mc (as they are interchangeable) means son or family of, aon means one or unique, and gusa means choice. Therefore Unique Choice or Choice One. Mac does not imply strict bloodlines, but could reflect kinship, dependent allies or tenants. This name first appears in the seventh century Scottish Senchus fer n-Alban (The History of the Men of Scotland).

Clan MacInnes' ancestors were among the early inhabitants of Islay, Jura and the Kintyre peninsula in Scotland, generally part of the region known as Argyll. These Scotti, a Celtic, Gaelic-speaking people, first appear there as settlers from Ireland in c. 500 when Fergus Mór, king of the north Irish kingdom of Dál Riata, and his two brothers, Loarn and Óengus, expanded their lands into southwestern Alba.

Óengus had already established a colony on Islay and/or Jura and was the master of ships for the new Kingdom. Óengus (Angus) is considered to be the first of the MacInnes Clan and is thought to be buried on Iona. Dalriada quickly grew in influence and strength, and eventually overran the indigenous Pictish peoples and their culture. The area then became known as Scotland after these Scotti immigrants.

It is believed that MacInneses lived on Iona with Columba. Oengus and his descendants would have exploited their seagoing skills and ventured to Iona at an early time. Iona is the final resting-place of many MacInneses and lore says that Columba selected the site whereupon the Kiel Church now stands in Lochaline near Kinlochaline Castle, the castle built by the MacInneses.

During the 9th century the clan moved out of the western isles and into Argyll (Morvern and Ardgour). This was most likely as a result of constant Viking raids in the islands.

By the early 12th century MacInnes people were well established in all of Morvern (the peninsula bounded by Loch Sunart and Loch Linnhe and adjacent to the Isle of Mull). The traditional seat of the Chiefs of Clan MacInnes was established there in Kinlochaline Castle. As the Viking raids continued to terrorize their lands the MacInneses became members of an alliance known as Siol Gillebride (Seed of the Servant of St. Bride) along with MacGillivrays, MacMasters and MacEacharns somewhat in the manner of Clan Chattan, under the leadership of the Celtic-Norse warrior Somerled (killed in 1164, often referred to as Somerled MacGillebride, and his father was believed to be a MacAonghais Chief). Somerled’s grandson was the first of Clan Donald (McDougall and McDonald clans).

How the clan entered into this alliance is told as follows:

Chief of MacInnes sought Somerled to seek his aid. A skilled warrior, Somerled agreed to help them if they would follow his directions completely. He told them to kill and skin a herd of longhaired highland cattle, and to then march their normally kilt-clad fighters in plain sight of the invading Vikings. Next they were to dress in the cowhides with the long hair turned outwards and march again before their enemies; then a third time they were to march in front of the Vikings, but this time wearing the hides turned skin side out. The MacInnes men followed his advice. The Vikings were fooled into thinking the MacInneses had three times their actual fighting strength. They turned and fled the “overwhelming numbers” and many were slain. In thanks to Somerled, the MacInnes’ vowed to become his vassals.

In the mid 14th century, the last chief of Clan MacInnes was killed, along with his sons, by order of John of Islay, Lord of the Isles. Chief MacInnes had advised John to divorce his wife, Amy MacRuari, and marry the daughter of future king Robert II of Scotland. Amy got revenge by telling John that MacInnes had complained that, while being lodged at John's residence, his quarters stank because they were used as a dog's kennel. Enraged, John ordered Donald, son of Lachlan MacLean, to kill MacInnes. These murders were carried out in Castle Ardtornish on the Sound of Mull, and as a reward Clan MacLean were deeded the lands and castle of Ardgour. Clan MacInnes remains without a Chief, and many of the clan scattered to Appin, Craignish, Lochaber and Skye, but some of the clan continued to occupy the castle.

In the 16th Century, many of the MacInnes Clan moved to Sleat on the Isle of Skye. Five longships are said to have made the journey, each holding a family group. From these five families are descended the five lineages of the name of MacInnes on the Isle of Skye. Some of these MacInnes men became the hereditary bowmen to the Mackinnon of Strath. The bowmen were known as Sliochd Neill a’ bhogha (The Line of Neil of the Bow). Others of the dispossessed Clan had joined with Clan Dugall Craignish and some went to Perthshire and joined with the MacGregors, leading to an ill-informed present-day claim that MacInnes is a Sept of MacGregor. It should be also noted that Clan Innes is unrelated to MacInnes having arisen in Moray east of Inverness at a later date.

During the Jacobite uprisings most of the Clan MacInnes supported the British government however one branch of the clan fought for the Jacobite cause:

In the 1745 Jacobite Rising, MacInnes Clansmen took up arms on both sides. Some stood with the Campbells and the House of Argyll, but others (MacInneses of Morvern, Lochaber and Appin) supported Prince Charles Edward Stuart and fought beside Stewart of Ardshiel, who commanded of the Appin (Stewart) Regiment. A MacInness clansman, MacMaster of Glenaladale, raised Prince Charles banner at Glenfinnan. Four MacInnes men were killed and two wounded in the battle. Others may have been captured and subsequently hanged. Donald Livingstone, the 18-year-old son of Anna MacInnes of Morvern, saved the Appin Banner from Culloden and smuggled it home. The banner is now housed in the Museum of Scotland. These kinsmen are buried in the cemetery of Kiel Kirk (Kiel Church) in Lochaline Morvern. The church and cemetery exist today, with many old grave stones housed in the session house next to the church. One John McGinnes helped row Charles to safety and when captured and flogged, refused to disclose the details.

The Highland Clearances, from about 1790 to 1840s, drove many MacInneses from their homes, notably on Skye and Mull. These Clearances were designed to get the tenant farmers off the land to make room for profitable sheep herding. Poverty, crop failures and high rents also contributed to the tide of emigration that emptied the highlands during the 19th Century. Numerous parish cemeteries on Mull, Skye, Iona, Islay and across Argyll hold the remains of clansmen. 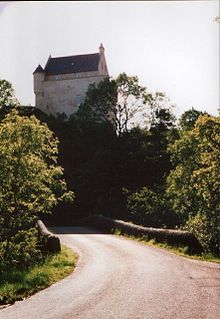 Kinlochaline Castle, the former seat of the chief of Clan MacInnes.

Kinlochaline Castle was the seat of the chief of Clan MacInnes for much of the Clan's history. In 1645, during the English Civil War, the castle was attacked and burned by MacDonalds serving under James Graham, 1st Marquess of Montrose, a member of Clan Graham. Clan MacInnes retained control of the castle following this attack, along with a later attack in 1679 during a feud with the Archibald Campbell, 9th Earl of Argyll. The castle, which was then heavily damaged, was abandoned by Clan MacInnes around 1690.

The oldest crest of the MacInneses is a bee on a thistle and the motto “E labore Dulcedo” (English: In labor, pleasure) coming from an incident in the 13th century when a MacInnes Chief was awakened by a bee sting to lead his forces in surprising and defeating a party of Viking raiders.

The above crest appears to be an historical inaccuaracy. See the MacInnes Clan page for an explanation of how it occurred:

In 1960, a branch of the Clan matriculated arms from which was adopted the crest of a Right Arm in Proper Tartan Holding a Bow and the motto “Irid Ghipt Dhe Agus an Righ” (English: By the grace of God and King). This crest was adopted for commercial use by the Council of Chiefs. Since there is no Clan Chief, the arms are lodged with Lord Lyon King of Arms. That branch of the MacInnises emigrated from Skye and founded a farm in Nova Scotia in the 19th century called Malagawatch. As such the "arm & bow" crest and the motto above are part of the Arms of MacInnes of Malagawatch. In 2004, the International Association of Clan MacInnes was granted Arms by the Court of Lord Lyon which incorporated the "arm & bow", with slight modifications, atop a wholly new coat of arms incorporating significant symbols related to the history of the Clan.

There are many Anglicized spellings of the name: MacInnis, Macinnis, McInnis, Macinnes, McInnes, McGinnis (not to be confused with McGuinnes), McKinnis, MacAngus, McAninch, McIninch, McKynes, M'Aneiss, McCanse, McNiesh, McAinsh and many more, since Mac and Mc are interchangeable.

Masters, MacMaster and variants are of the Clan. To this day there are 157 variants of the spelling of the name 'MacInnes' including spellings with Mc, Mac, and the occasional G.

The name “Innes” is often linked to MacInnes. Innes originally has a later origin in Moray, but a number of people with the surname "MacInnes" dropped the "Mac", in common with holders of other Mac- names, during times when it was unfavourable to be identified as a Gaelic speaker.