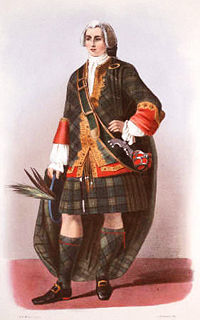 A romantic depiction of a clan chief illustrated by R. R. McIan, from James Logan's The Clans of the Scottish Highlands, 1845.

The Scottish Gaelic word clann means children.[1] In early times, and possibly even today, clan members believed themselves to descend from a common ancestor, the founder of the Scottish clan. From its perceived founder a clan takes its name. The clan chief is the representative of this founder, and represents the clan as well. In the Scottish clan system, the term chief denotes a greater chief than that of a chieftain. In consequence, branch chiefs (heads of branches of a clan) are designated chieftains.[2] Scottish clans who no longer have a clan chief are referred to as armigerous clans.

Functions of the Clan Chief

Historically the principal function of the chief was to lead his clan in battle on land and sea.[3] The chief and the chieftain were at one time in the Scottish Highlands influential political characters, who wielded a large and often arbitrary authority.[4] However, none of this authority now remains.[4] Highland chiefship or chieftainship in the modern sense is no more than a high social dignity.[4] The existence of chiefship and chieftainship has been recognized by Scottish law,[4] however, the disarming of the Highland clans after the 1745 Jacobite rising effectively eliminated clanship from ordinary civil or statutory law.[5] Most notable was the Heritable Jurisdictions (Scotland) Act, of 1746 that abolished traditional rights of jurisdiction afforded to Scottish clan chiefs.[6]

Recognition of Chief in Scots law

While Scottish law recognizes the existence of Scottish Clans, Chiefs and Chieftains,[7] this recognition is only one of social dignity or precedence, and as such does not involve any interest which the law has jurisdiction.[8] The Lyon Court can make a recording of the dignity of a chiefship acknowledged by attestation, but can not declare judicially a chiefship.[9] Further, no Scottish court can exercise a jurisdiction to determine disputes of competing claimants to a chiefship or chieftainship;[4][10] to quote Lord Aitchinson in the Court of Session: "Historically the idea of a chief or chieftain submitting his dignity to the arbitrament of it Court of law is really grotesque. The chief was the law, and his authority was derived from his own people.".[4]

"Chief of the Name and Arms"

A crest badge of a clan chief of a fictional Scottish clan. A clan chief is the only one entitled to three eagle feathers.

In cases where a clan has no chief, or a family wishes for recognition as a clan, clan or family members can formally get together in a derbhfine and appoint a clan commander. The Lyon Court can recognize this appointment for an interim period of ten years, whereupon a further derbhfine will be required.[14] Clans with clan commanders are still referred to as armigerous clans.

Clan Chiefs are entitled to supporters on their coat of arms to specify a very high dignity. A requirement of the Standing Council of Scottish Chiefs for membership, is that an applicant chief must demonstrate a right to hereditary supporters. A chief without supporters could only be allowed to serve on the Council for his or her lifetime, and each successive heir would have to be re-elected in the same manner.[15]

Elements of the chief's arms are often found in the crest badge worn, usually on a bonnet, by members of Scottish clans. These crest badges contain, in most cases, the chief's heraldic crest, and heraldic motto (or sometimes the chief's secondary motto or slogan). Clan chiefs are entitled to wear three eagle feathers behind their crest badge. Clan Chieftains are entitled to two eagle feathers. A clan member is not entitled to any feathers unless he or she has been granted arms by the Lord Lyon King of Arms, in which case they are an armiger and can wear a crest badge containing elements from their own arms.

For the correct way to address a Scottish Clan Chief, see this table.