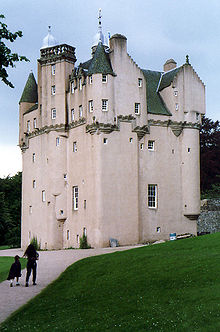 Craigievar Castle, historic seat of the Chiefs of Clan Sempill

The name Sempill has been known in Renfrewshire since the 12th century. It is tradition that the name originates from someone who is humble or simple. An alternate, unlikely, etymology is that Sempill is a corruption of St Pauls.

During the 14th century Clan Sempill supported King Robert the Bruce. Robert de Semple's two sons were rewarded by the King for their services. The elder son, Robert, received all of the lands around Largs in Ayrshire which had been confiscated from the Clan Balliol. The younger son, Thomas, received a grant of half the lands of Longniddry.

Sir Thomas Sempill fell leading the clan in support of King James III of Scotland at the Battle of Sauchieburn in June 1488. His only son, John Sempill, inherited his estates. John was made Lord Sempill during the reign of King James IV of Scotland.

During the Anglo-Scottish Wars the Clan Sempill, led by Lord John Sempill, fought at the Battle of Flodden Field in 1513. The chief was killed in the battle and was succeeded by his son William.

William's son Robert was made constable of the King's Castle Douglas. William also led Clan Sempill at the Battle of Pinkie Cleugh in 1547 where he was captured by the English.

The Clan Sempill were initially loyal to Mary, Queen of Scots, but later supported King James IV of Scotland and fought against Mary at the Battle of Carberry Hill.

The Clan Sempill also fought in the Regent Moray's army at the Battle of Langside in 1568.

During the Civil War the Clan Sempill supported the Royalist cause. However they would later take up the Protestant faith.

During the Jacobite Uprisings of 1745–1746 the Clan Sempill supported the British government. The Chief led his men against the Jacobites at the Battle of Culloden in 1746 in the 25th Regiment of Foot, made from Scottish soldiers which today is called the King's Own Scottish Borderers.