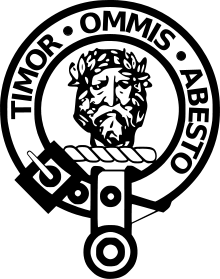 Crest badge suitable to be worn by members of Clan Macnab. 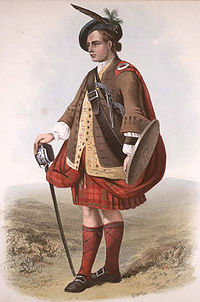 A romanticised Victorian-era illustration of a Clansman by R. R. McIan from The Clans of the Scottish Highlands published in 1845.

The founder of the Clan Macnab is said to have belonged to the clerical profession. In Gaelic, Mac an Aba means "the son of abbot". He is said to have been Abbot of Glendochart. The title Mac an Aba eventually became one of four variations used today: "MacNabb", "McNabb", "Macnab" or "McNab".

Gilbert's son, Finlay Macnab was the sixth chief and he died in the reign of King James I of Scotland. He is said to have been a famous bard and according to tradition he composed a famous gaelic poem which the Clan Macpherson attributed to Oaain.

Finlay's son was Patrick Macnab who in turn named his son Finlay after his grandfather. Upon Patrick's resignation as chief, his son Finlay received a charter of lands in Ardchyle and Wester Duinish in the county of Perth. This charter was received under the great seal during the reign of King James III of Scotland dated January 1 1486. 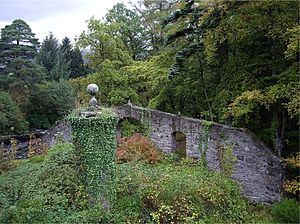 Chief Finlay Macnab also received a charter during the reign of King James IV of Scotland dated January 9 1502. His son designated the fifth "Laird" witnessed a charter from the King to Duncan Campbell in 1511.

During the Anglo-Scottish Wars the Macnab chief's eldest son is believed to have possibly been killed at the Battle of Flodden Field in 1513. The 8th chief himself, Finlay, who died in 1525 at Eilan Ran and is buried at Killin, granted lands of Ewer and Leiragan to his wife, Mariat Campbell, for her lifetime.

In turn his son also called Finlay Macnab the sixth "laird" mortgaged a great portion of his lands to Campbell of Glenorchy, ancestor of the Marquis of Breadalbane, as appears by a charter to "Colin Campbell of Glenorchy, his heirs and assignees whatever, according to the deed granted to him by Finlay Macnab of Bovain, 24th November 1552, of all and sundry the lands of Bovain and Ardchyle, &c, confirmed by a charter under the great seal from Mary, dated 27th June 1553". Glenorchy's right of superiority the Macnabs always refused to acknowledge.

The 7th laird was also called Finlay Macnab who lived during the reign of King James IV of Scotland. This chief entered a bond of friendship with his cousin Lauchlin MacKinnion of Strathairdle from Clan Mackinnon on the 12th July 1606.

This chief carried on the deadly feud with the Clan Neish or MacNeish. The Clan Neish were also sometimes known as the M'llduys who possessed lands in the upper part of Strathearn and inhabited the lower part of Loch Earn which they called Neish Island. 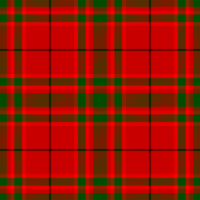 One Christmas the chief of Macnabs sent his servant to Crieff for provisions however on his return he was attacked and robbed of all provisions. He survived and returned empty handed to the Macnab chief. The chief had twelve sons who were all men of great strength but one above all was exceedingly athletic and the strongest of them all. He was called in gaelic "Iain mion Mac an Aba" or "Smooth John Macnab". The brothers set out carrying on their shoulders a fishing boat. They arrived at Loch Earn where they launched the boat and passed over to Neish Island. Smooth John Macnab kicked open the door of the Neishes house, the Macnabs killed all of the Neishes who were taken by surprise. However two Neishes, a man and a boy survived by hiding under a bed. Carrying off the heads of the Neishes, and any plunder they could secure, the youths presented themselves to their father, while the piper struck up the Pibroch of Victory.

During the Civil War the Clan Macnab supported the Royalist cause of King Charles I. The Macnabs are known to have fought in support of James Graham chief of the Clan Graham and the 1st Marquess of Montrose. The Macnab chief with his clan are known to have fought bravely at the Battle of Kilsyth where they were victorious. They fought together alongside their allies of the Clan Robertson and Clan Ogilvy.

As a result the Macnab chief was put in command of the Royalist garrison at Kincardine Castle. The castle was then besieged by a Covenanting force commanded by General David Leslie of the Clan Leslie. Macnab found that it would not be possible to maintain defense and during the night, sword in hand at the head of 300 men they cut their way through the besieging force. All made it through apart from the Macnab chief himself and one other man who were captured and sent to Edinburgh as prisoners of war. The chief was sentenced to death but he escaped and rejoined King Charles and continued to fight.

Smooth John Macnab who was now much older, was finally killed when he led a number of Macnabs at the Battle of Worcester in 1651. The clan's lands were again ravaged this time by Covenanters and the clan history and papers were again lost. The chief of the Macnabs married a daughter of Campbell of Glenlyon, and with one daughter had a son, Alexander Macnab, ninth laird, who was only four years old when his father was killed on Worcester battle field. His mother and friends applied to General Monk for some relief from the family estates for herself and children. That general made a favourable report on the application, but it had no effect.

During the Jacobite uprisings part of the Clan Macnab supported the British Government. The Macnab chief John Macnab held a commission in the British Black Watch Regiment and was taken prisoner at the Battle of Prestonpans in 1745 where he remained until after the Battle of Culloden in 1746. However his son Archibald Macnab was a Captain in the Loudon's Highlanders regiment who supported the British government. He died a lieutenant-general in 1791.

Another branch of Macnabs supported the Jacobites and the House of Stuart. They were led by Allister Macnab of Inshewan and Archibald Macnab of Acharne.

By reason of the burdens accumulated on the estate by the twelfth Chief, the greater part of the possessions of the family passed into the hands of the House of Breadalbane. Then the last Chief who had his home at Kinnell betook himself to Canada. At a later date he returned and sold the last of his possessions in this country, the Dreadnought Hotel in Callander. When he died he bequeathed all his heirlooms to Sir Allan MacNab, Bart., Prime Minister of the Province of Canada, whom he considered the next Chief. But Sir Allan’s son was killed by a gun accident when shooting in the Dominion, and the chieftainship of Clan Macnab passed to the Macnabs of Arthurstone.

The chief memorial of the old Macnab family in Glendochart today is their romantic burying-place among the trees on the rocky islet of Inch Buidhe in the Dochart, a little way above Killin. There, with the Dochart in its rocky bed singing its great old song for ever around their dust, rest in peace the once fierce beating hearts of these old descendants of the Abbot of Glendochart and the royal race of Alpin.

The current chief is James Macnab of Macnab.

Septs of Clan Macnab include: