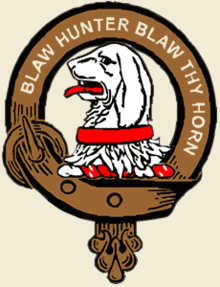 Clan Forrester is a Lowland Scottish clan. The clan is an armigerous clan, and has no position under Scots law, because there is no chief recognised by the Lord Lyon King of Arms.

It is believed that the Clan Forrester is of Celtic origin. The founder of the clan is believed to be a man called Marnin Forrester who held lands in Dunipace, Stirlingshire in about 1200.

Sir Adam Forrester is the first confirmed Forrester from contemporary evidence and is also regarded as the first confirmed founder of the Clan Forrester. He was an ambassador, merchant, Provost of Edinburgh, Keeper of the Great Seal of Scotland and Deputy Chamberlain of Scotland. In 1376 he acquired the estate of Corstorphine in Midlothian where Corstorphine Castle once stood.

During the Wars of Scottish Independence the Clan Forrester supported King Robert the Bruce of Scotland and fought against the English at the Battle of Halidon Hill in 1333. A daughter of the chief of Clan Forrester married Robert de Munro of Foulis, chief of the Clan Munro.

The tenth chief Sir George Forrester was created a Baronet of Nova Scotia and raised to Lord Forrester of Corstophine in 1633. On his death the title became dormant and still awits to be claimed.

James and William Baille, the sons in law of the first Lord Forrester assumed the name and arms of Forrester and inherited the title under a regrant of the peerage of Scotland.

During the Civil War the Clan Forrester supported the Royalist cause. As a result James, chief of Clan Forrester was fined heavily by Oliver Cromwell and the estates became burdened with debts. James was murderdby his mistress, Mrs Christian Nimmo, when his brother who was mad, inherrited the title.

In 1776 William Forrester was an infantry man in King George's Army when England tried to regain control of the thirteen colonies. After the Revolutionary War had ended, William Forrester was declared AWOL by England's Army and he settled in the newly formed United States of America. William's son John Forrester would go on to found the first protestant church in Oneida. [1]

Castles and seats of the Clan Forrester have included Corstorphine Castle and Torwood Castle.