Stirlingshire or the County of Stirling (Scots: Coontie o Stirlin, Scottish Gaelic: Siorrachd Sruighlea) is a registration county of Scotland, based around Stirling, the former county town. It borders Perthshire to the north, Clackmannanshire and West Lothian to the east, Lanarkshire to the south, and Dunbartonshire to the south-west.

In 1975 most of Stirlingshire was included in the Central Region, with Kilsyth and surrounding area becoming part of Strathclyde Region. Since 1996 the area of the former county has been part of the council areas of East Dunbartonshire, Falkirk, North Lanarkshire and Stirling. 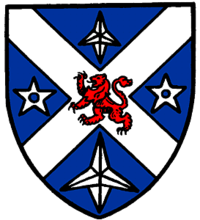 The arms of Stirling County Council

The County Council of Stirling was granted a coat of arms by Lord Lyon King of Arms on September 29, 1890. The design of the arms commemorated the Scottish victory at the Battle of Bannockburn in the county. On the silver saltire on blue of St Andrew was placed the rampant red lion from the royal arms of Scotland. Around this were placed two caltraps and two spur-rowels recalling the use of the weapons against the English cavalry.[1]

On the abolition of the county council in 1975, the arms were regranted to Stirling District Council. They were regranted a second time in 1996 to the present Stirling Council, with the addition of supporters. 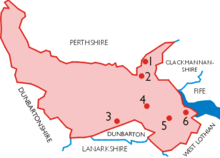 Map of Stirlingshire in 1975, showing the position of burghs in the county.

Until 1975 the county contained the following burghs:

In 1930 Falkirk and Stirling became large burghs, taking over some of the duties of the county council. The remaining four burghs became "small burghs", with limited powers. 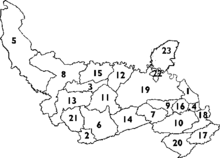 Civil parishes in Stirlingshire in use for local government until 1930.

In 1930 the parishes ceased to be used for local government purposes, and the landward area of the county (the part outside the burghs) was divided into eight districts. These were abolished in 1975.[2]

Following the Act of Union, Stirlingshire returned members to the House of Commons of the Parliament of the United Kingdom from 1708.

In 1918 seats in the House of Commons were redistributed. Stirlingshire was thereafter represented by three members of parliament.

These boundaries continued in use until 1983, when new constituencies were formed based on the regions and districts created in 1975.