James IV (17 March 1473 – 9 September 1513) was King of Scots from 11 June 1488 to his death. He is generally regarded as the most successful of the Stewart monarchs of Scotland, but his reign ended with the disastrous defeat at the Battle of Flodden Field, where he became the last monarch from not only Scotland, but also from all of Great Britain, to be killed in battle.

James IV was the son of James III and Margaret of Denmark, probably born in Stirling Castle. In 1474, his father arranged his betrothal to Princess Cecily of England.[1] As heir apparent to the Scottish crown, he became Duke of Rothesay. His father was not a popular king and faced two major rebellions during his reign. During the second rebellion, the rebels set up the 15-year-old James as their nominal leader. His father was killed fighting rebels at the Battle of Sauchieburn on 11 June 1488, and James took the throne and was crowned at Scone on 24 June. When he realised the indirect role which he had played in the death of his father, he decided to do penance for his sin. From that date on, he wore a heavy iron chain cilice around his waist, next to the skin, each Lent as penance, adding every year extra ounces.[2]

James IV quickly proved to be an effective ruler. He defeated another rebellion in 1489, took a direct interest in the administration of justice and finally brought the Lord of the Isles under control in 1493. For a time, he supported Perkin Warbeck, the pretender to the English throne, and carried out a brief invasion of England on his behalf in September 1496. Then, in August 1497, James laid siege to Norham Castle, using his father's bombard Mons Meg.

James recognized nonetheless that peace between Scotland and England was in the interest of both countrie, and established good diplomatic relations with England, which was at that time emerging from a period of civil war. First he ratified the Treaty of Ayton in February 1498. Then, in 1502 James signed the Treaty of Perpetual Peace with Henry VII. He also saw the importance in building a fleet that could provide Scotland with a strong maritime presence. James founded two new dockyards for the purpose and acquired a total of 38 ships for the Royal Scottish Navy, including the Margaret, and the carrack Michael or Great Michael. The latter, built at great expense at Newhaven and launched in 1511, was 240 feet (73 m) in length, weighed 1,000 tons and was, at that time, the largest ship in Europe.[3] 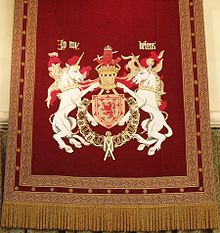 James was a true Renaissance prince with an interest in practical and scientific matters. He granted the Edinburgh College of Surgeons a royal charter in 1506, turned Edinburgh Castle into one of Scotland's foremost gun foundries, and welcomed the establishment of Scotland's first printing press in 1507. He built a part of Falkland Palace, Great Halls at Stirling and Edinburgh castles, and furnished his palaces with tapestries.[4] James was a patron of the arts, including many literary figures, most notably the Scots makars whose diverse and socially observant works convey a vibrant and memorable picture of cultural life and intellectual concerns in the period. Figures associated with his court include William Dunbar, Walter Kennedy and Gavin Douglas, who made the first complete translation of Virgil's Aeneid in northern Europe. His reign also saw the passing of the makar Robert Henryson.

James was well educated and a fluent polyglot. In July 1498 the Spanish envoy Pedro de Ayala reported to Ferdinand and Isabella that;

"the King is 25 years and some months old. He is of noble stature, neither tall nor short, and as handsome in complexion and shape as a man can be. His address is very agreeable. He speaks the following foreign languages ; Latin, very well ; French, German, Flemish, Italian, and Spanish ; Spanish as well as the Marquis, but he pronounces it more distinctly. He likes, very much, to receive Spanish letters. His own Scots language is as different from English as Aragonese from Castilian. The King speaks, besides, the language of the savages who live in some parts of Scotland and on the islands. It is as different from Scots as Biscayan is from Castilian. His knowledge of languages is wonderful. He is well read in the Bible and in some other devout books. He is a good historian. He has read many Latin and French histories, and profited by them, as he has a very good memory. He never cuts his hair or his beard. It becomes him very well."[5]

James IV was the last King of Scots known to have spoken Scottish Gaelic. James is one of the rulers reported to have conducted a language deprivation experiment,[6] sending two children to be raised by a mute woman alone on the island of Inchkeith, to determine if language was learned or innate.[7] At Stirling Castle, James maintained an alchemical workshop with a furnace of the quintessence. The project consumed quantities of quick-silver, golden litharge, and tin.[8] It was said that one of his alchemists Father Damian attempted to fly from Stirling Castle.

In May 1493 John MacDonald, Lord of the Isles, was forfeited by the Parliament of Scotland. King James himself sailed to Dunstaffnage Castle, where the western chiefs made their submission to him. John surrendered and was brought back as a pensioner to the royal court, then lived at Paisley Abbey. The Highlands and Islands now fell to direct royal control. John's grandson Domhnall Dubh (Donald Owre), one of the possible claimants to the Lordship was peaceable, but the other, his nephew Alexander MacDonald of Lochalsh invaded Ross and was later killed on the island of Oronsay in 1497.[9]

In October 1496 the Royal Council ordered that the Clan Chiefs in the region would be held responsible by the king for crimes of the islanders. This act for the governance of the region was unworkable, and after the Act of Revocation of 1498 undermined the Chief's titles to their lands, resistance to Edinburgh rule was strengthened. James waited at Kilkerran Castle at Campbeltown Loch to re-grant the Chief's charters in the summer of 1498. Few of the Chiefs turned up.[10] At first, Archibald Campbell, 2nd Earl of Argyll, was set to fill the power vacuum and enforce royal authority, but he met with limited success in a struggle with his brother-in-law, Torquil MacLeod of Lewis. Torquil was ordered to hand over Donald Dubh, heir to the lordship of the Isles, to James IV at Inverness in 1501. James waited, but Torquil never came.

After this defiance, Alexander Gordon, 3rd Earl of Huntly, was granted Torquil's lands. He raised an army in Lochaber and also cleared the tenants of that area, replacing them with his supporters.[11] After the parliament of 1504, a royal fleet sailed north from Ayr to attack the Castle of Cairn-na-Burgh, west of Mull, where, it is thought, Maclean of Duart had Donald Dubh in his keeping.[12] As progress at the siege was slow, James sent Hans the royal gunner in Robert Barton's ship and then the Earl of Arran with provisions and more artillery. Cairn-na-Burgh was captured by June 1504 but Donald Dubh remained at liberty.[13] In September 1507, Torquil MacLeod was besieged at Stornoway Castle on Lewis. Donald Dubh was captured and kept in prison for the rest of life, and Torquil MacLeod died in exile in 1511. The Earl of Huntly was richly rewarded for his troubles, a price that James was prepared to pay.[14]

When war broke out between England and France as a result of the Italian Wars, James found himself in a difficult position as his obligations under the Auld Alliance with France conflicted with the treaty made with England in 1502. The new king of England, Henry VIII, attempted to invade France in 1513, and James reacted by declaring war on England. Pope Leo X sent a letter to James threatening him with ecclesiatical censure for breaking peace treaties on 28 June 1513, and subsequently James was excommunicated by Cardinal Christopher Bainbridge. James summoned sailors and sent the Scottish navy, including the Great Michael to join the ships of Louis XII of France.[15] Hoping to take advantage of Henry's absence at the siege of Thérouanne, he led an invading army southward into Northumbria, only to be killed, with many of his nobles and common soldiers, at the disastrous Battle of Flodden on 9 September 1513, ending Scotland's land-based involvement in the War of the League of Cambrai.

A body, thought to be his, was recovered from the battlefield and taken to London for burial. James had been excommunicated, and although Henry VIII had obtained a breve from the Pope on 29 November 1513 to have the King buried in consecrated ground at St. Pauls, the embalmed body lay unburied for many years at Sheen Priory in Surrey.[16] The body was lost after the Reformation. John Stow claimed to have seen it, and said the king's head (with red hair) was removed by a glazier and eventually buried at St Michael Wood Street.[17] James's bloodstained coat was sent to Henry VIII (then on campaign in France) by his queen, Catherine of Aragon.[18] Erasmus provided an epitaph for the King in his Adagia. Later, in 1533, he wrote to James V of Scotland pointing out this essay on duty under the adage Spartam nactus es, (You who were born to Sparta shall serve her), on the subject of the Flodden campaign and the death of James and his son, Alexander.[19]

Legends of the King's resting place

However rumours persisted for many years that James had survived and had gone into exile, or his body was buried in Scotland, with no evidence to support them. Two castles in the Scottish Borders are claimed to be the real resting place of James. These stories follow the legend that, prior to the Scots charge at Flodden, James had ripped off his royal surcoat to show his nobles that he was prepared to fight as an ordinary man at arms. The body recovered by the English did not have the iron chain round its waist. (So some historians claimed he removed his chain while dallying in Lady Heron's bedroom.) However, Border legend claimed that during the battle of Flodden four Home horsemen or supernatural riders swept across the field snatching up the King's body as such a prize could not be allowed to fall into English hands after such a humiliating defeat, or that the King left the field alive and was killed soom after. In the 18th century when the medieval well of Hume Castle was being cleared the skeleton of a man with a chain round his waist was discovered in a side cave. Unfortunately this skeleton has since disappeared. Another version of this tale has the skeleton discovered at Hume a few years after the battle and re-interred at Holyrood Abbey. Exactly the same story was told for Roxburgh Castle, the skeleton there discovered in the 17th century. Yet another tradition is the discovery of the royal body at Berry Moss, near Kelso. Fuelling these legends, Robert Lindsay of Pitscottie writing in the 1570s claimed that a convicted criminal offered to show Regent Albany the King's grave ten years after the battle, but Albany refused.[20]

His early betrothal to Cecily of England came to nothing, but interest in an English marriage remained.

In a ceremony at the altar of Glasgow Cathedral on 10 December 1502, James confirmed the Treaty of Perpetual Peace with Henry VII of England.[21] By this treaty James married Henry's daughter Margaret Tudor. After a wedding by proxy in London, the marriage was confirmed in person on 8 August 1503 at Holyrood Abbey, Edinburgh.

James IV has been depicted in historical novels and short stories. They include:[24]