December 9 is the 343rd day of the year (344th in leap years) in the Gregorian calendar. There are 22 days remaining until the end of the year. 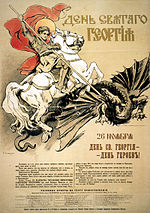 Russian World War I poster calling for donations on the Autumn Day of Saint George.