2001 (MMI) was a common year that started on a Monday. In the Gregorian Calendar, it was the 2001st year of the Common Era or the Anno Domini designation. It was the 2nd year of the 2000s decade. It was also the first year of the 3rd millennium and of the 21st century. 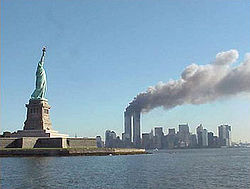 Soldiers board a Chinook helicopter.