Year 1939 (MCMXXXIX) was a common year starting on Sunday (link will display the full calendar) of the Gregorian calendar. This year also marks the start of the Second World War, the deadliest human conflict in history.

Below, events of World War II have the WWII prefix. 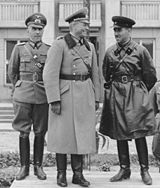 Common parade of Wehrmacht and Red Army in Brest at the end of the Invasion of Poland. At the center Major General Heinz Guderian and Brigadier Semyon Krivoshein.

December 15: Gone with the Wind premieres.