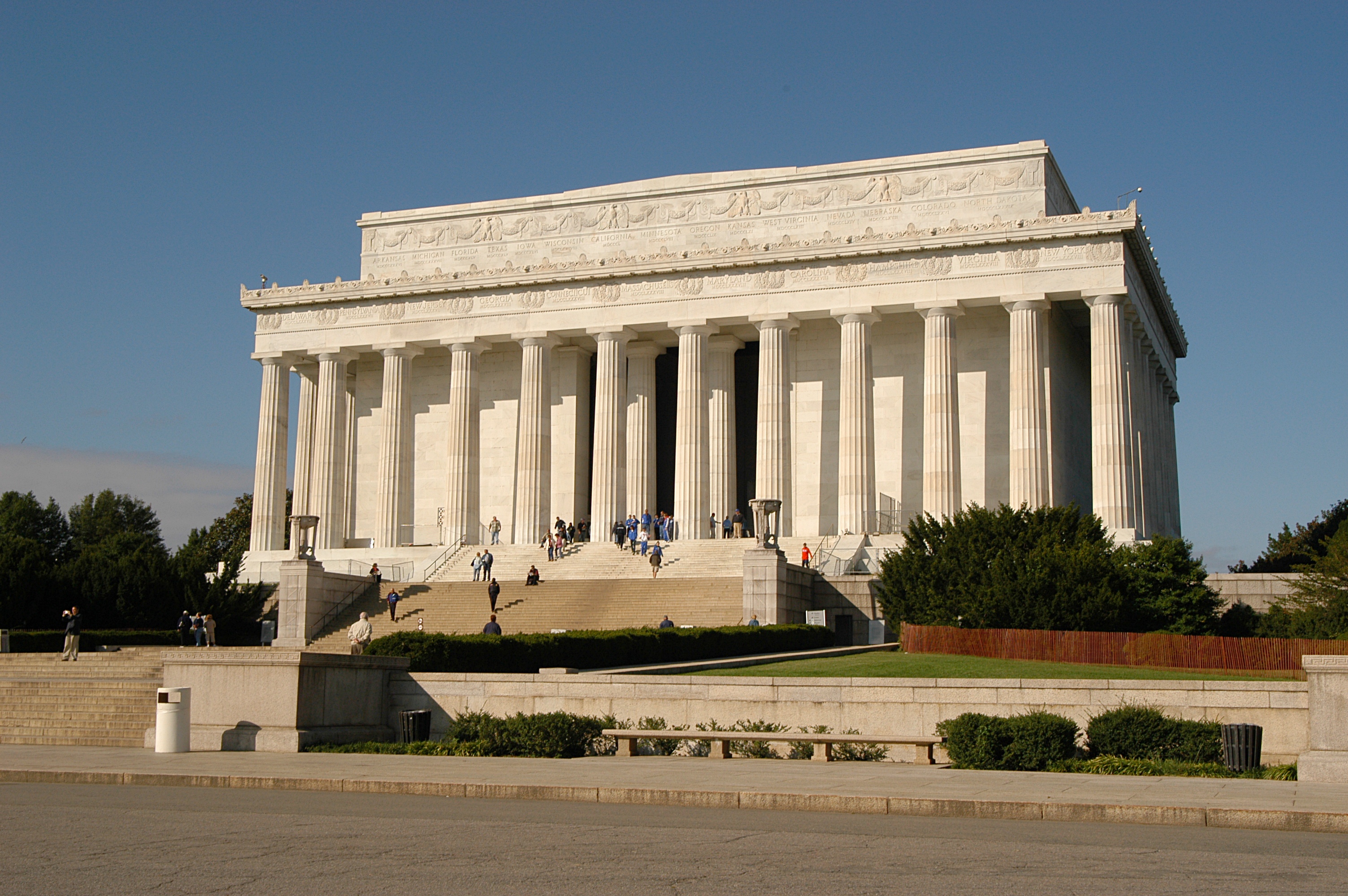 The Lincoln Memorial is a United States Presidential memorial built to honor the 16th , . It is located on the in The architect was , the sculptor was , and the painter of the interior murals was .

The building is in the form of a Greek Doric temple and contains a large seated sculpture of Abraham Lincoln and inscriptions of two well-known speeches by Lincoln. The memorial has been the site of many famous speeches, including 's "" speech, delivered on , during the rally at the end of the .

Like other monuments on the National Mall – including the nearby , , and – the memorial is administered by the under its group. It has been listed on the since , . It is open to the public 24 hours a day. In 2007, it was ranked seventh on the "List of America's Favorite Architecture" by the .

The Lincoln Monument Association was incorporated by the in March 1867 to build a memorial to Lincoln. A site was not chosen until 1901, in an area that was then swampland. Congress formally authorized the memorial on , , and the first stone was put into place on Lincoln's birthday, , . The monument was dedicated by Former President and Chief Justice on , , a ceremony attended by Lincoln's only surviving child, . The stone for the building is and , quarried at the town of . The Lincoln sculpture within is made of Georgian marble, quarried at the town of . In 1923, designer received the Gold Medal of the , his profession's highest honor, for the design of the memorial. Originally under the care of the Office of Public Buildings and Public Parks, it was transferred to the on

Standing apart from the somewhat triumphal and Roman manner of most of Washington, the memorial takes the severe form of a Greek Doric temple. It is "peripteral", with 36 massive columns, each 37 feet (10 m) high, surrounding the of the building itself, which rises above the s. As an afterthought, the 36 columns required for the design were seen to represent the 25 at the time of Lincoln's death, as well as the 11 seceded States, and their names were inscribed in the above each column. The names of the 48 states of the Union when the memorial was completed are carved on the exterior attic walls, and a later plaque commemorates the admission of Alaska and Hawaii in 1959.

The main influence on the style of the Lincoln Memorial was the at Olympia, Greece. The focus of the memorial is 's sculpture of Lincoln, seated on a throne. French studied many of 's photographs of Lincoln and depicted the President as worn and pensive, gazing eastwards down the toward the capital's starkest emblem of the Union, the . Beneath his hands, the Roman , symbols of the authority of the Republic, are sculpted in relief on the seat. The statue stands 19 feet 9 inches (6 m) tall and convert|19|ft|m|0 wide, and was carved from 28 blocks of white Georgia marble.

The central cella is flanked by two others. In one, Lincoln's is inscribed on the south wall, and in the other, is inscribed on the north wall. On the latter, the word Future was carved with an E instead of F and had to be filled in. It can still be seen today. Above the texts are a series of murals by that depict an angel (representing truth), the freeing of a slave (on the south wall, above the Gettysburg Address) and the unity of the American North and South (above the Second Inaugural Address). On the wall behind the statue, and over Abraham's head is this dedication:

"AS IN THE HEARTS OF THE PEOPLE"

"FOR WHOM HE SAVED THE UNION"

"THE MEMORY OF ABRAHAM LINCOLN"

There are a couple of purported sculptural features associated with the memorial.

Some have claimed that 's face is carved onto the back of Lincoln's statue, looking back across the Potomac at Arlington House (Custis-Lee Mansion) in .

Another popular legend is that Lincoln is shown using to represent his initials, with his left hand shaped to form an "A" and his right hand to form an "L". The National Park Service denies both stories, calling them s.

The Lincoln Memorial is shown on the reverse of the United States one cent coin, which bears Lincoln's portrait on the front.

The memorial also appears on the back of the U.S. five dollar bill, the front of which also bears Lincoln's portrait.