Michael Joseph "Mike" Farrell (born February 6, 1939) is an American actor, best known for his role as Captain B.J. Hunnicutt on the television series M*A*S*H (1975–83). He is an activist for politically liberal causes.

Farrell was a producer of Patch Adams (1998) starring Robin Williams, and has starred on the television series Providence (1999–2002). He appeared as Milton Lang, the father of Victor Lang (John Slattery), husband of Gabrielle Solis (Eva Longoria) on Desperate Housewives (2007–2008). He was seen in the tenth season episode "Persona" of Law & Order: Special Victims Unit.

Farrell, one of four children, was born in St. Paul, Minnesota, the son of Agnes and Joe Farrell.[1] When he was two years old, his family moved from South St. Paul to Hollywood, California, where his father worked as a movie studio carpenter. Farrell attended West Hollywood Grammar School with Natalie Wood, and graduated from Hollywood High School, served in the United States Marine Corps, and worked at various jobs before his acting career. 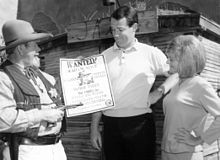 Mike with Judy Farrell at Knott's Berry Farm in 1966

During the 1960s, Farrell guest-starred in a few series. Notable roles included Federal Agent Modell in the episode "Monkee Chow Mein" on The Monkees in 1967, astronaut Arland in the episode "Genie, Genie, Who's Got the Genie?" on I Dream of Jeannie, and an Army doctor in an episode of Combat!. In 1968 he originated the continuing role of Scott Banning in an NBC soap opera Days of our Lives. In 1970 he starred as one of the young doctors in the CBS prime-time series The Interns, in a cast led by Broderick Crawford. In 1971 he played the assistant to Anthony Quinn in ABC's The Man and the City. In 1973, while under contract to Universal Studios, Farrell starred with Robert Foxworth in The Questor Tapes. During the years under contract, he guest starred in a number of shows, including Banacek and Marcus Welby, M.D., and starred in a television pilot with Jane Wyman, which did not sell. Farrell also had a cameo role in the 1967 classic The Graduate.[2]

Farrell's big break came in 1975 when Wayne Rogers unexpectedly departed M*A*S*H at the end of the third season. Farrell was quickly recruited for the newly created role of B.J. Hunnicutt. He stayed with the series for its remaining eight years on the air. During that time, Farrell wrote five episodes and directed four.

Since M*A*S*H, Farrell has guest starred in Murder, She Wrote; Justice League; Matlock; Mannix; Desperate Housewives; and many others. Farrell played Jonathan Kent in the Superman (1996) animated series, with wife Shelley Fabares playing Martha Kent. He also hosted several "National Geographic Presents" specials and starred in a number of TV movies, including Memorial Day (which he co-produced); Sex and the Single Parent; Prime Suspect; Choices of the Heart; Private Sessions; Vanishing Act; A Deadly Silence; The Price of the Bride; Incident at Dark River; The Whereabouts of Jenny; and Silent Motive. He has done two one-man shows: JFK, a One Man Show for PBS and, on stage, a national tour of David W. Rintels' play Clarence Darrow. In 1983 Farrell starred in the movie Memorial Day.

In 1999, Farrell was given the part of veterinarian Jim Hansen (the father of the lead character, Dr. Sydney Hansen, portrayed by Melina Kanakaredes) on the NBC-TV melodrama series Providence.

In his portrayal of Sydney's father, Farrell played opposite Concetta Tomei, who portrayed his wife (Lynda Hansen). Tomei's character died during the first episode of the series, but continued to appear as a ghost/memory in vignettes of later episodes.

The show would prove to be a big hit with the critics and in the Nielsen ratings. Farrell appeared in 64 of the 92 episodes before its cancellation in December 2002. 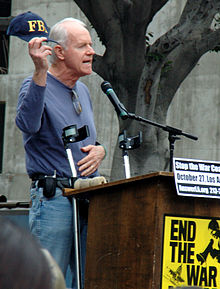 Farrell has worked on many activist campaigns.

Even before he was well-known, Farrell was an activist for many political and social causes. He has worked with Human Rights Watch, was on the Board of Advisors of the original Cult Awareness Network, and has been president of Death Penalty Focus for more than ten years,[5] being the first person to be awarded their Human Rights Award, subsequently named after him, in 2006.

In 1985, Farrell was in Central America, helping refugees from the civil war in El Salvador. A guerrilla commander, Nidia Diaz, had been taken prisoner. She needed surgery, but no Salavadoran doctor dared to help her. Amnesty International recruited a foreign doctor. Farrell was present as an observer but was, in his words, "shanghaied into assisting with the surgery" when the doctor said his help was needed. The in-prison surgery was successful. Diaz went on to be one of the signatories of the Chapultepec Peace Accords (the peace treaty ending the war), and she served in the Constituent Assembly of El Salvador and in the Central American Parliament.[6][7]

Farrell has also been active in the Screen Actors Guild. In 2002 he was elected First Vice President of the Guild in Los Angeles. He served in the post for three years.[8]

In 2006 Farrell appeared with Jello Biafra and Keith Gordon in the documentary Whose War?, examining the U.S. role in the Iraq War.

Just Call Me Mike: A Journey to Actor and Activist Mike Farrell's memoirs as an actor, film producer and writer. Highlights his working-class childhood in West Hollywood, his break into show business, personal life, increasing involvement in politics and the human rights movement in the USA, Cambodia and South America. He chronicles his ongoing journey of self-discovery, personal commitment and humanitarian engagements. 2007 ISBN 1933354089

He married actress Judy Farrell in 1963. They were divorced in 1983. They have two children, Michael and Erin. On M*A*S*H Hunnicutt's daughter was also named Erin.