Iain Murray Rose AM was born on 6 January 1939 in Nairn, Scotland, but he moved to Australia with his family at an early age after World War II. He took up swimming as a boy and was an Olympic Games champion at age 17.

Rose became an Olympian for the first time at the 1956 Summer Olympics in Melbourne. He won the 400 metre and 1500 metre freestyle races and was a member of the winning team in the 4x200 metre relay. Winning three gold medals in his home country immediately made him a national hero. He was the youngest Olympian to be awarded three gold medals in one Olympic Games. Afterwards, Rose moved to the United States to study at the University of Southern California. At the 1960 Summer Olympics in Rome, Rose again won an Olympic gold medal. He also won a silver and a bronze bringing his haul to six medals. Rose continued to compete through his graduation from USC in 1962. He eventually set 15 world records. He set the world record in the 800-meter freestyle in 1962, which was not broken until Semyon Belits-Geiman set a new record in 1966.[1][2][3] Rose continued to compete as a masters swimmer.

He majored in drama and television and took the leading part in many plays on campus. During his career, he was also known for his strict vegetarianism. This earned him the nickname "The Seaweed Streak". He appeared on the radio program "You Bet Your Life" hosted by Groucho Marx on 17 March 1958. In response to a question from Groucho, Rose attributed his three gold medals in 1956 to his vegetarian diet. On 6 January 1959, he appeared as a guest challenger on the TV panel show To Tell The Truth. Rose also appeared in the 1964 surf movie, Ride the Wild Surf, as well as Ice Station Zebra.

He is the patron of the Australian charity 'The Rainbow Club' which teaches disabled children how to swim.

An avenue at the Sydney Olympic complex was named for him in 2000. He was one of the eight flag-bearers of the Olympic Flag at the opening ceremony of the 2000 Summer Olympics in Sydney, New South Wales, Australia. 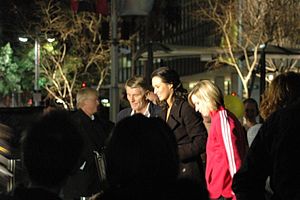 Murray Rose being interviewed by a Seven News journalist during a live cross of the evening news bulletin to Circular Quay in Sydney prior to the opening ceremony of the 2008 Beijing Olympics.