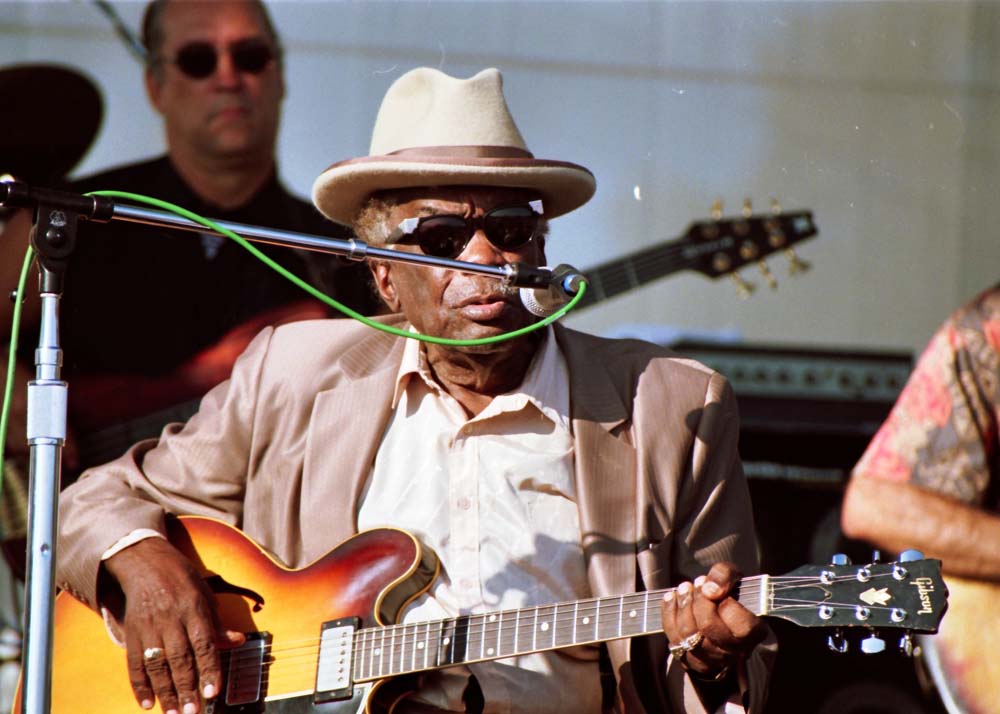 John Lee Hooker (, &ndash; , ) was an influential American singer, ist, and born in Coahoma County near Clarksdale, . From a musical family, he was a cousin of . John was also influenced by his stepfather, a local blues guitarist, who learned in Shreveport, to play a droning, one-chord blues that was strikingly different from the of the time.

Hooker was born on , [There is some debate as to the year of Hooker's birth. 1915, 1917, 1920, and 1923 have all been given.(Boogie Man, p. 22) 1917 is the one most commonly cited, although Hooker himself claimed, at times, 1920, which would have made him "the same age as the recorded blues" (p. 59)] in near , Mississippi, the youngest of the eleven children of William Hooker (1871&ndash;1923), a and a , and Minnie Ramsey (1875–?). Hooker and his siblings were home-schooled. They were permitted to listen only to religious songs, with his earliest musical exposure being the spirituals sung in church. In 1921, his parents separated. The next year, his mother married William Moore, a blues singer who provided John's first introduction to the guitar (and whom John would later credit for his distinctive playing style). ["Conversation with the Blues CD Included"By Paul Oliver, p. 188
See also: "Guitar Facts"By Bennett Joe, Trevor Curwen, Cliff Douse, Joe Bennett, p. 76] The year after that (1923), John's natural father died; and at age 15, John ran away from home, never to see his mother and stepfather again. ["Boogie Man" p.43]

Throughout the 1930s, Hooker lived in Memphis where he worked on and occasionally performed at house parties. He worked in factories in various cities during , drifting until he found himself in in 1948 working at . He felt right at home near the blues venues and saloons on Hastings Street, the heart of black entertainment on Detroit's east side. In a city noted for its piano players, guitar players were scarce. Performing in Detroit clubs, his popularity grew quickly, and seeking a louder instrument than his crude acoustic guitar, he bought his first .

Hooker's recording career began in 1948 when his agent placed a demo disc, made by Hooker, with the , owners of the label. The company initially released an up-tempo number, "", which became Hooker's first hit single. Though they were not songwriters, the Biharis often purchased or claimed co-authorship of songs that appeared on their labels, thus securing songwriting for themselves, in addition to their streams of income.

Sometimes these songs were older tunes renamed ('s "Rock Me Baby"), anonymous jams ("B.B.'s Boogie") or songs by employees (bandleader ). The Biharis used a number of s for songwriting credits: Jules was credited as "Jules Taub"; Joe as "Joe Josea"; and Sam as "Sam Ling". One song by John Lee Hooker, "Down Child" is solely credited to "Taub", with Hooker receiving no credit for the song whatsoever. Another, "Turn Over a New Leaf" is credited to Hooker and "Ling".

Despite being , Hooker was a prolific . In addition to adapting the occasionally traditional blues lyric (such as "if I was chief of police, I would run her right out of town"), he freely invented many of his songs from scratch. Recording studios in the 1950s rarely paid black musicians more than a pittance, so Hooker would spend the night wandering from studio to studio, coming up with new songs or variations on his songs for each studio. Due to his recording contract, he would record these songs under obvious s such as "John Lee Booker", "Johnny Hooker", or "John Cooker." [Liner notes to "Alternative Boogie: Early Studio Recordings, 1948-1952"]

His early solo songs were recorded under Bernie Besman. John Lee Hooker rarely played on a standard beat, changing to fit the needs of the song. This often made it difficult to use backing musicians who were not accustomed to Hooker's musical vagaries: As a result, Besman would record Hooker, in addition to playing guitar and singing, stomping along with the music on a wooden pallet. ["Boogie Man" p. 121] For much of this time period he recorded and toured with , who is still performing as of 2008. Later sessions for the VeeJay label in Chicago used studio musicians on most of his recordings, including Eddie Taylor, who could handle his musical idiosyncrasies very well. His biggest UK hit, "Boom Boom", (originally released on VeeJay) had a horn section to boot!

He appeared and sang in the 1980 movie "The Blues Brothers". Due to Hooker's improvisatory style, his performance was filmed and sound-recorded live at the scene at Chicago's Maxwell Street Market, in contrast to the usual "playback" technique used in most film musicals. [ [http://www.imdb.com/title/tt0080455/trivia The Blues Brothers (1980) - Trivia ] ] Hooker was also a direct influence in the look of 's character Jake Blues, borrowing his trademark sunglasses and .

In 1989, he joined with a number of musicians, including , and to record "The Healer", for which he and Carlos Santana won a . Hooker recorded several songs with , including "Never Get Out of These Blues Alive", "The Healing Game" and "I Cover the Waterfront". He also appeared on stage with Van Morrison several times, some of which was released on the live album "". The same year he appeared as the title character on 's "".

Hooker recorded over 100 albums. He lived the last years of his life in the , where, in 1997, he opened a nightclub called "John Lee Hooker's Boom Boom Room", after one of his hits.

He fell ill just before a tour of Europe in 2001 and died soon afterwards at the age of 83. The last song Hooker recorded before his death, is "Ali D'Oro", a collaboration with the Italian soul singer , in which Hooker sang the chorus "I lay down with an angel". He was survived by eight children, nineteen grandchildren, numerous great-grandchildren and a nephew.

Hooker's guitar playing is closely aligned with piano Boogie Woogie. He would play the walking bass pattern with his thumb, stopping to emphasize the end of a line with a series of trills, done by rapid s and s. The songs that most epitomize his early sound are "Boogie Chillen", about being 17 and wanting to go out to dance at the Boogie clubs, "", a blues standard first recorded by , and "Tupelo Blues", [ [http://www.youtube.com/watch?v=7GOCAC8FCqE YouTube - John Lee Hooker - Tupelo (1995) ] ] a stunningly sad song about the flooding of in April 1936.

He maintained a solo career, popular with and fans of the early 1960s and crossed over to white audiences, giving an early opportunity to the young . As he got older, he added more and more people to his band, changing his live show from simply Hooker with his guitar to a large band, with Hooker singing.

His vocal phrasing was less closely tied to specific bars than most blues singers'. This casual, rambling style had been gradually diminishing with the onset of bands from but, even when not playing solo, Hooker retained it in his sound.

Though Hooker lived in Detroit during most of his career, he is not associated with the Chicago-style blues prevalent in large northern cities, as much as he is with the southern rural blues styles, known as , , , or "front porch blues". His use of an electric guitar tied together the Delta blues with the emerging post-war electric blues. [ [http://www.rhino.com/RZine/StoryKeeper.lasso?StoryID=203 Rhino - John Lee Hooker (1917-2001) - Rzine #203 ] ]

There are many John Lee Hooker albums out there. Below you will find the original albums with notable reissues.