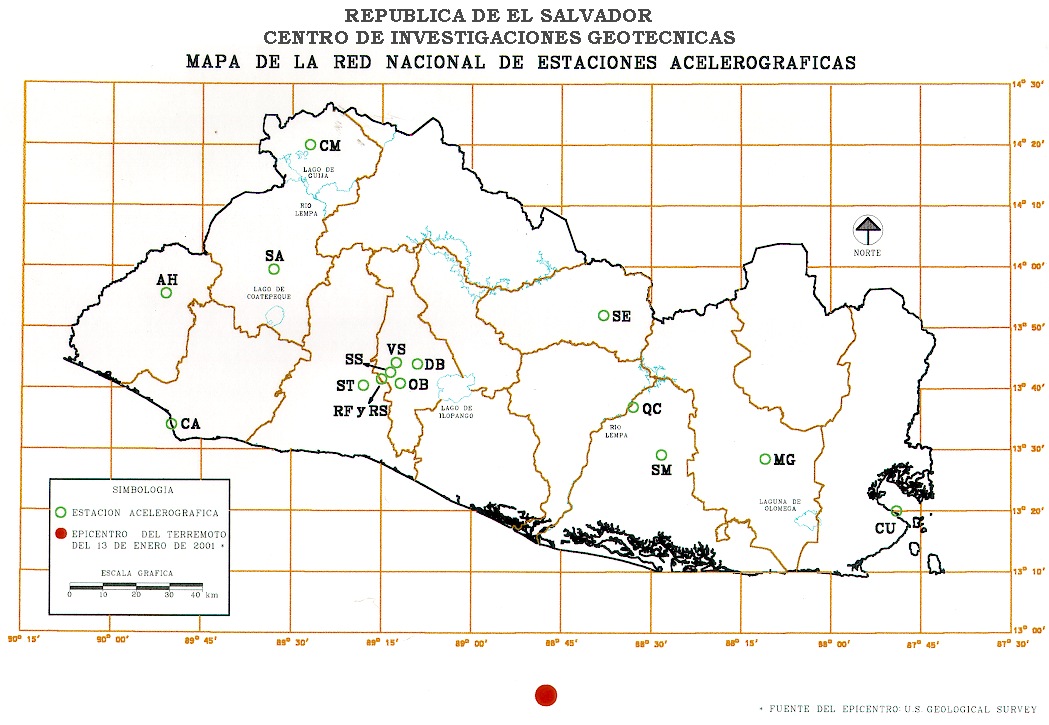 magnitude = 7.6 MwThe 2001 El Salvador earthquakes were two earthquakes which hit within exactly one month of each other, on and .

As of February 2, 2001, more than 2,500 s had hit El Salvador, leading to additional damage and terrorizing the inhabitants. Clean water and sanitation became a matter of grave concern in many areas due to the earthquake's destruction of some $7 million to municipal drinking water systems, and tens of thousands of people were living outdoors in spite of the approaching ("invierno"). 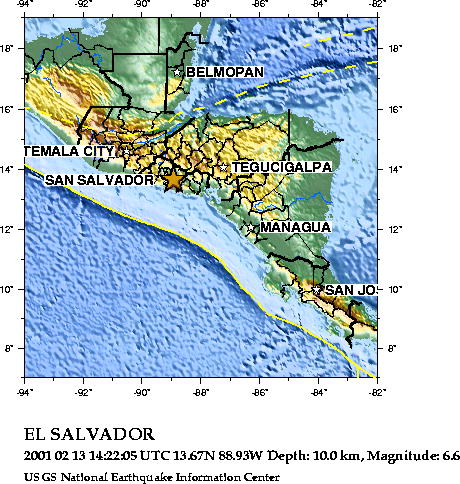 At 14:22:05 UTC, the 6.6 quake struck with the epicentre at 15 miles (30 km) E of , El Salvador (13.67N 88.93W) at the depth of 10 km. At least 315 people were killed, 3,399 injured and extensive damage. The most severe damage occurred in the San Juan Tepezontes-San Vicente-Cojutepeque area, though the quake was felt throughout the country and in neighboring Guatemala and Honduras. Landslides occurred in many areas of El Salvador.

Another example of a regional earthquake sequence is the Landers-Big Bear sequence in southern . The magnitude 7.3 Landers earthquake was followed by the magnitude 6.4 , which occurred on a different fault approximately 36 km away.

This may be the wrong time to forget.

...According to some press reports, the developers at Las Colinas had been authorized to proceed in spite of existing zoning regulations designed to prevent residential developments on the slopes. The location was a desirable one because the Santa Tecla area was relatively safe from guerrilla operations. After pacification the pressure from developers subsided as there seems to be plenty of available land in the valley; but there is a definite need for setting up enforceable zoning regulations in order to protect the hillsides from future deforestation and encroachment by developers. ...

The 2001 earthquake did not approach the level of severity of some previous earthquakes, yet it wiped out the equivalent of half the annual gross national income. A small investment in preparedness would pay off handsomely.|30px|Cinna Lomnitz and Sergio Rodríguez Elizararrás

The government's response to the earthquakes was critiqued from different sides, with some criticizing the legislature for not approving the full amount of emergency funding urged by President Flores,