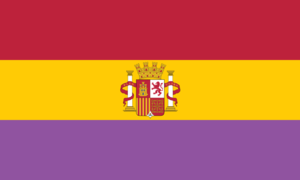 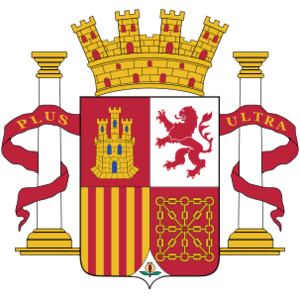 stat_year1 =
stat_area1 =
stat_pop1 =The Second Spanish Republic was the system of government in between , when King Alfonso XIII left the country, and , when the last of the Republican ("republicanas") forces surrendered to Nationalist ("nacionales") forces led by , at the end of the .

The first action of the provisional government was to call for new elections, whose representatives would work on a new, Republican Constitution. This was approved on , . Among other constitutional freedoms, the new constitution was to establish and , and a right to as well as extending to women. It also stripped the Spanish nobility of any juridicial status, simplified the Legislative branch to a single chamber called the "", and established legal procedures for the of public services such as land, banks and railways.

Also, the Republican Constitution changed the symbols of the country. The was established as the and the , with three horizontal red-yellow-purple fields, became the flag of Spain. Under the new Constitution, Spain's regions had the right to for the first time in history. (1932) and the Basque Country (1936) exercised this right, with , and Galicia in talks before the breakout of the Civil War. Overall, in spite of a wide range of liberties, the Constitution failed to agree in key areas with the conservative right, which was very powerfully rooted in rural areas, and the powerful , which was stripped of schools and public subsidies under the new Constitution. ("For the later constitution, see ".)

The majority vote in the 1934 elections was won by , led by José María Gil Robles, a coalition of centre-right and far-right parties ranging from to . CEDA set up a coalition with the led by Lerroux, which had come second in the elections. The Socialists came third. With Lerroux as head of Government, the new coalition Executive suspended most of the reforms of the previous government.

The inclusion of three CEDA ministers in the government that took office on led to a and an armed uprising by socialists and anarchists in on . Miners in Asturias occupied the capital, , killing officials and clergymen and burning theatres and the University. This rebellion lasted for two weeks until it was ruthlessly crushed by the army, led by General , who in the process destroyed large parts of the city. This operation earned Franco the nickname "The Butcher of Asturias". Another rebellion by autonomists in Catalonia was also suppressed, and was followed by mass arrests and trials.

The suppression of the land reforms that had been attempted by the previous government, and the failure of the Asturias miners' uprising, led to a more radical turn by the parties of the left, especially in the PSOE (Socialist Party), where the moderate lost ground to , who advocated a socialist revolution. At the same time the involvement of the Centrist government party in the scandal deeply weakened it, further polarising political differences between right and left. These differences became evident in the 1936 elections.

On , new elections were called. Despite significant rivalries and disagreements the Socialists, Communists, and the Catalan and Madrid-based left-wing Republicans decided to work together under the name Popular Front. The Popular Front won the election on with 263 MPs against 156 right-wing MPs, grouped within a coalition of the National Front with CEDA, Carlists and Monarchists. The moderate centre parties virtually disappeared; between the elections, Lerroux's group fell from the 104 representatives it had in 1934 to just 9.

In the following months there was increasing violence between left and right. This helped development of the Fascist-inspired Falange Española, a Nationalist party led by (son of the former dictator); although it had only taken 0.7 per cent of the votes in the election, by July 1936 the Falange had 40,000 members.

The Castillo and Calvo Sotelo assassinations

On 1936, Lieutenant José Castillo, an important member of the anti-fascist military organization Unión Militar Republicana Antifascista (UMRA), was murdered by Falangist gunmen. In retaliation the following day, July 13, UMRA members shot , leader of the right-wing opposition and the most prominent Spanish monarchist who, describing the government's actions as Bolshevist and Anarchist, had been exhorting the army to violence, declaring that Spanish soldiers "would be mad not to rise for Spain against anarchy". Fact|date=February 2007

Calvo Sotelo's assassination was blamed on the government by the Right. Although it is sometimes misinterpreted as the catalyst for the further political polarisation that ensued, long before that time the Falange and other right-wing conspirators including had already been conspiring to launch a military coup d'état against the government, to be led by Francisco Franco and other right-wing army officers . [. "The Battle for Spain: The Spanish Civil War 1936–1939". New York: Penguin Books, 2006. p. 51] When the antifascist Castillo and the pro-Fascist Calvo Sotelo were buried on the same day in the same Madrid cemetery, fighting between the Police Assault Guard and fascist militias broke out in the surrounding streets, resulting in four more deaths.

Three days later (), the planned coup d'état began more or less as it had been planned, with an army uprising in which then spread to several regions of the country. But the army uprising met with serious resistance, which led it into to a full-blown civil war with the legitimately elected government in Madrid.

On July 17, 1936, General led the colonial army from Morocco to attack the mainland, while another force from the north under General moved south from Navarre. Military units were also mobilised elsewhere to take over government institutions. Franco's move was intended to seize power immediately, but successful resistance by Republicans in places such as Madrid, Barcelona, Valencia, the Basque country and elsewhere meant that Spain faced a prolonged civil war. Before long, much of the south and west was under the control of the Nationalists, whose regular Army of Africa was the most professional force available to either side. Both sides received foreign military aid, the Nationalists, from the major an , namely Italy, Germany, as well as neighbouring , the Republic from the USSR, and communist organised volunteers in the International Brigades.

The at Toledo early in the war was a turning point, with the Nationalists winning after a long siege. The Republicans managed to hold out in Madrid, despite a Nationalist assault in November 1936, and frustrated subsequent offensives against the capital at Jarama and Guadalajara in 1937. Soon, though, the Nationalists began to erode their territory, starving Madrid and making inroads into the east. The north, including the Basque country fell in late 1937 and the Aragon front collapsed shortly afterwards. The was probably the most infamous event of the war and inspired Picasso's painting. It was used as a testing ground for the German Luftwaffe's . The in July-November 1938 was the final desperate attempt by the Republicans to turn the tide. When this failed and Barcelona fell to the Nationalists in early 1939, it was clear the war was over. The remaining Republican fronts collapsed and Madrid fell in March 1939.

A was immediately formed in . The legislature was last reunited on , , in Mexico City, to elect the President Diego Martinez Barrio and gave a to the government of José Giral.In 1946, after the end of , the offices were transferred in .Many states withdrew recognition when the was admitted to , in 1953, after the repeal of the ban on diplomatic missions imposed on the Franco regime.

On , , the same day of the first free elections in Spain since 1936 , last President of the Republic, recognized the elections and declared the dissolution of the Spanish Republic.

The Second Republic existed during a period of worldwide economic depression, and the resulting high unemployment and poverty led to dissatisfaction with the republican government as well as traditional centers of power, such as the Church, landowners, and the nobility. In the ensuing civil unrest, violence in the form of assassination, revolutionary s, and mob actions increased dangerously.

In the context of the rise of totalitarian government, especially in Germany, in Italy and in the Soviet Union, political discourse became increasingly polarized. Rather than working towards consensus between political forces, politicians leaned towards radicalization and resorted to violence: by 1936, politicians such as Largo Caballero called openly for a "bloody workers' Revolution".

The murders of the leftist military leader Castillo and the rightist politician Calvo Sotelo opened the way to a rapidly increasing flood of violence between the political left and right. There remains to the present day controversy and debate over whether responsibility for the initial violence and its escalation rests with the political left or the political right. Arguments have been made that rightist elements initiated the coup d'état against the increasingly ungovernable Republic in response to the threats of communism, anarchism, anti-clericalism, and the violence that accompanied these trends. Conversely, it is also asserted by others, such as the historian Helen Graham, that the nationalist revolt was in essence a betrayal of the Republic and an attempt by the formerly powerful to violently reassert their authority. Regardless of the attribution of blame or responsibility, history bears evidence to the fact that from 1936 Spain entered a chaotic period of incredible violence and brutality in which not only partisans of the right and left but also ordinary citizens bore the burden of war, poverty, and murder.

* [http://www.ateneo.unam.mx/textoconstitucion.htm Constitución de la República Española (1931)]
* [http://www.memoriadelfuturo.org/manifiesto.html Pro-Republic, 75th Anniversary Manifiesto] es icon
* [http://www.guardian.co.uk/fromthearchive/story/0,,1822726,00.html Original article from the beginning of the Spanish Civil War] in "The Guardian" archives.
* [http://www.spartacus.schoolnet.co.uk/SPpopular.htm History of the republic and the victory of the Popular Front in elections]