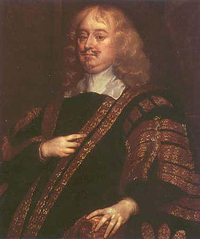 Edward Hyde, 1st Earl of Clarendon. Clarendon is dressed in the garb of the Lord Chancellor, a position he held 1658-1667. 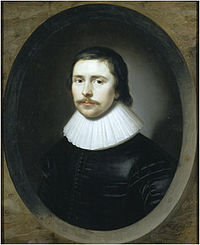 Hyde was the third son[1] of Henry Hyde of Dinton and Purton, Wiltshire (brother of Lawrence Hyde (attorney-general)), a member of a family for some time established at Norbury, Cheshire and his wife Mary Langford. He was initially educated at Gillingham School,[2] and entered Magdalen Hall, Oxford, (now Hertford College, Oxford, where his portrait hangs in the hall) in 1622, having been rejected by Magdalen College, and graduated BA in 1626. Intended originally for holy orders in the Church of England, the death of two elder brothers made him his father's heir, and in 1625 he entered the Middle Temple to study law. His abilities were more conspicuous than his industry, and at the bar his time was devoted more to general reading and to the society of eminent scholars and writers than to the study of law treatises.

This time was not wasted. In later years Clarendon declared "next the immediate blessing and providence of God Almighty" that he "owed all the little he knew and the little good that was in him to the friendships and conversation...of the most excellent men in their several kinds that lived in that age." These included Ben Jonson, Selden, Waller, Hales, and especially Lord Falkland; and from their influence and the wide reading in which he indulged, he doubtless drew the solid learning and literary talent which afterwards distinguished him.

In 1629 he married his first wife, Anne, daughter of Sir George Ayliffe of Grittenham, who died six months afterwards; and secondly, in 1634, Frances, daughter of Sir Thomas Aylesbury, Master of Requests and Anne Denman. From this second marriage there were three children, including a daughter, Anne. In 1633 he was called to the bar, and obtained quickly a good position and practice. His marriages had gained for him influential friends, and in December 1634 he was made keeper of the writs and rolls of the common pleas; while his able conduct of the petition of the London merchants against Portland earned Laud's approval. 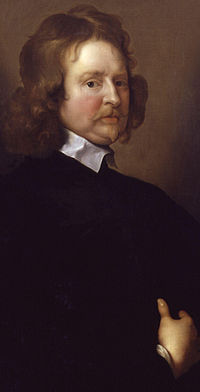 In April 1640, Hyde was elected Member of Parliament for both Shaftesbury and Wootton Bassett in the Short Parliament and chose to sit for Wootton Bassett. In November 1640 he was elected MP for Saltash in the Long Parliament,[3] He was at first a moderate critic of King Charles I, but gradually moved over towards the royalist side, championing the Church of England and opposing the execution of the Earl of Strafford, Charles's primary advisor. Following the Grand Remonstrance of 1641, Hyde became an informal advisor to the King. He was disabled from sitting in parliament in 1642.

During the Civil War, Hyde served in the King's council as Chancellor of the Exchequer, and was one of the more moderate figures in the royalist camp. By 1645 his moderation had alienated him from the King, and he was made guardian to the Prince of Wales, with whom he fled to Jersey in 1646.

Hyde was not closely involved with Charles II's attempts to regain the throne in 1649 to 1651. It was during this period that Hyde began to write his great history of the Civil War. Hyde rejoined the exiled king in the latter year, and soon became his chief advisor; Charles named him Lord Chancellor in 1658. On the restoration of the monarchy in 1660, he returned to England with the King and became even closer to the royal family through the marriage of his daughter, Anne, to the king's brother James, Duke of York, the heir-presumptive (who, after the death of his first wife, would succeed to the throne as James II of England & VII of Scotland). Their two daughters, Mary II and Queen Anne would each one day reign in their own right.

In 1660, Hyde was raised to the peerage as Baron Hyde, of Hindon in the County of Wiltshire, and the next year was created Viscount Cornbury and Earl of Clarendon. He served as Chancellor of the University of Oxford from 1660-1667.

As Lord Chancellor, it is commonly thought that Clarendon was the author of the "Clarendon Code", designed to preserve the supremacy of the Church of England. However, he was not very heavily involved with the drafting and actually disapproved of much of its content. It was merely named after him, as he was a chief minister.[citation needed] 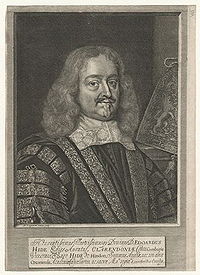 The Earl of Clarendon in a 1666 engraving by David Loggan.

In 1663, the Earl of Clarendon was one of eight Lords Proprietor given title to a huge tract of land in North America which became the Province of Carolina. However, he began to fall out of favour with the king, and the military setbacks of the Second Anglo-Dutch War of 1665 to 1667 led to his downfall. Clarendon was impeached, in part, for blatant violations of habeas corpus; sending prisoners out of England to places like Jersey, and holding them there without benefit of trial. He was impeached by the House of Commons, and forced to flee to France in November, 1667. Clarendon was accompanied to France by his private chaplain and ally William Levett, later Dean of Bristol.[4]

He spent the rest of his life in exile, working on the History of the Rebellion and Civil Wars in England, his classic account of the English Civil War. (The proceeds from this book's publication were instrumental in building the Clarendon Building at Oxford.) He died in Rouen on 9 December 1674. Shortly after his death, his body was returned to England, and he is buried in Westminster Abbey. 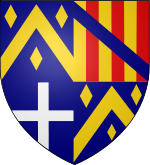 The Earl of Clarendon's arms[5]

Clarendon was grandfather to Mary II and Queen Anne, via the marriage of his daughter Anne Hyde to the future James II. Clarendon's sons, Henry Hyde, 2nd Earl of Clarendon, and Lawrence Hyde, 1st Earl of Rochester, were also major political figures in their own right. His third son Hon. Edward Hyde died at the age of twenty, shortly after being brought into Parliament. Clarendon's two cousins, Richard Rigby, Secretary of Jamaica and his son, Richard Rigby, Chief Secretary of Ireland and Paymaster of the Army, were successful politicians in the succeeding generations.

In the film Cromwell, Clarendon (called only Sir Edward Hyde in the movie), is portrayed by Nigel Stock as a sympathetic, conflicted man torn between Parliament and the King. He finally turns against him altogether when Charles I pretends to accept Cromwell's terms of peace, but secretly and treacherously plots to raise a Catholic army against Parliament and start a second civil war. Clarendon reluctantly, but bravely, gives testimony at the King's trial which is instrumental in condemning him to death.

In the 2003 BBC TV miniseries Charles II: The Power and The Passion, Clarendon was played by actor Ian McDiarmid. The series portrayed Clarendon (referred to as 'Sir Edward Hyde' throughout) as acting in a paternalistic fashion towards Charles II, something the King comes to dislike. It is also intimated that he had arranged the marriage of Charles and Catherine of Braganza already knowing that she was infertile so that his granddaughters through his daughter Anne Hyde (who had married the future James II) would eventually inherit the throne of England.