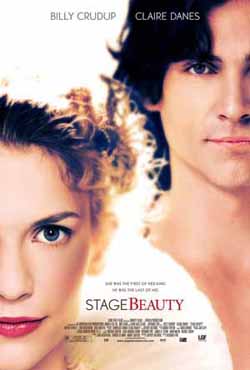 "Stage Beauty" is a 2004 British/American romantic directed by Sir . The screenplay by is based on his play "Compleat Female Stage Beauty", which was inspired by references to 17th century actor made in the detailed private diary kept by .

Kynaston is one of the leading actors of his day, famed for his portrayal of female characters, particularly in "". His loyal dresser Maria longs to perform on stage but is forbidden to do so by a law enacted by the s prior to the return of the to the throne. She fulfills her desire by appearing in plays presented in a local tavern under the name . Word of her performances spread and the novelty of a woman on stage draws the attention of Sir , who offers to be her patron, and eventually the king himself.

Kynaston's rant against allowing women on stage is overheard by , an aspiring actress and King Charles II's mistress, and she literally seduces Charles into banning men from playing female roles. As a result, Kynaston loses his lover, George Villiars, the , and the acceptance of society and - unable to shake the feminine characteristics he has perfected over the years - is reduced to performing bawdy songs in drag in s while Maria's career thrives.

When Maria is called upon to portray Desdemona for the king, she panics and implores Kynaston to coach her. Not only does he agree, but he insists on replacing company head Thomas Betterton in the role of the titular protagonist. In doing so, he discovers his ability to portray successfully a male character, while Maria evolves from an actress of middling talent to an acclaimed theatrical star.

While the film is rooted in historical fact - the first English theatre actress, although her name is unknown, is believed to have performed the role of Desdemona ["English Renaissance and Restoration Theatre" by Peter Thomson, "The Oxford Illustrated Guide to Theatre", edited by John Rusell Brown, Oxford University Press, 1995, pp. 206-207] - some liberties with the truth were taken. Nell Gwynne is represented as a mistress of the King who subsequently becomes an actress, but in reality she already was a noted theatre personality when Charles II met her. The sequence in which Maria and Kynaston discover naturalistic acting is anachronistic, as naturalism was not developed until the 19th century.

Interiors were filmed at the Old Royal Naval College in and in . According to commentary by Jim Clay on the DVD release of the film, because so little architecture remains in , and documentation of the period is minimal, he was required to use his imagination in creating buildings and back alleys on s.

In the DVD commentary, several cast members recall the film was shot during the hottest UK summer on record, and the temperature under the lights usually hovered at 46 degrees C (115 F), making performing in the heavy, layered costumes a grueling experience.

The film premiered at the in May 2004 prior to its general release in the UK. It was shown at the , the , and the Dinard Festival of British Cinema in France before opening in .

In his review in the "", A.O. Scott said, "At times, the movie feels like a fancy-dress version of "A Star Is Born" . . . Mr. Crudup's fine features, which flicker between masculine and feminine as the lighting changes and the mood shifts, are well suited for the role, though his sinewy, birdlike frame suggests Hollywood more than Restoration curviness . . . "Stage Beauty" is both timorous and ungainly, words that might also describe Ms. Danes's performance. Trapped in an English accent and in a character who must appear conniving and warmhearted in turn, she veers from teariness to brisk indignation like an doll with a jammed switch. The British actors in smaller roles handle the material better . . . George Fenton's Sunday-brunch score, on the other hand, is an indigestible dose of good taste ladled heavily over even the film's witty and delicate moments." [ [http://movies.nytimes.com/2004/10/08/movies/08STAG.html "New York Times" review] ]

David Rooney of "Variety" called the film "an intelligent and entertaining adaptation . . . skillfully acted, handsomely crafted" and added, "Eyre's spry direction of the refreshingly literate, witty drama shows a pleasingly light touch and a genuine feel for the bustle, backbiting and rivalry of the theater milieu . . . In a delicately measured performance that favors graceful subtlety over campy mannerism, Crudup conveys a nuanced sense of a man struggling to know himself . . . Put in the unenviable position of playing second fiddle to her male co-star in terms of feminine allure, Danes is lovely nonetheless . . . George Fenton's rich orchestral score enlivens the action with an occasional rousing Celtic flavor." [ [http://www2.variety.com/ref.asp?u=IMDB&p=H2BE&sid=VE1117923780 "Variety" review] ]

In "", rated the film three out of a possible four stars and called it "bawdy fun . . . . the gender role-playing puts spine in this period piece that is vital to the here and now." [ [http://www.rollingstone.com/reviews/movie/6139158/review/6552268/stage_beauty "Rolling Stone" review] ]

Carla Meyer of the "" said, "The film rarely matches Crudup's performance, appearing confused itself about whether it's farce or drama. But its palette of burnished browns and reds pleases the eye, and at its best, "Stage Beauty" captures the tensions and electricity of backstage dramas." [ [http://www.sfgate.com/cgi-bin/article.cgi?f=/c/a/2004/10/15/DDGTU99F8F1.DTL "San Francisco Chronicle" review] ]

In "", David Denby observed, "Second-rate bawdiness — that is, bawdiness without the wit of Boccaccio or Shakespeare or even — is more infantile than funny, and I'm not sure that the American playwright Jeffrey Hatcher, who concocted this piece for the stage and then adapted it into a movie, is even second-rate. "Stage Beauty" might be called the spawn of "", and, unfortunately, this is a "Shakespeare" that lacks the graceful spirit and breathless narrative drive of its ." [ [http://www.newyorker.com/critics/cinema/?041011crci_cinema "The New Yorker" review] ]

Owen Gleiberman of "" rated the film C+ and described it as "an odd amalgam of high spirits, lively ambition, and botched execution." [ [http://www.ew.com/ew/article/0,,710529,00.html "Entertainment Weekly" review] ]

The film won the Audience Award for Best Film, was cited by the National Board of Review for Excellence in Filmmaking, and was named the Overlooked Film of the Year by the .