The South face of the Clarendon Building

Clarendon Building after cleaning and restoration, 2006. 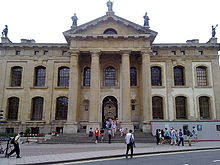 The Clarendon Building is a landmark Grade I listed building in Oxford, England, owned by the University of Oxford. It was built between 1711 and 1715 to house the Oxford University Press.[1] It stands in the centre of the city in Broad Street, near the Bodleian Library and the Sheldonian Theatre. It was vacated by the Press in the early nineteenth century, and used by the university for administrative purposes. In 1975 it was handed over to the Bodleian Library, and now provides office and meeting space for senior members of staff.[2]

The building was designed by Nicholas Hawksmoor (Christopher Wren's greatest pupil) and built between 1711 and 1715 to house the Press's printing operations. Before the construction of the Clarendon Building, the presses were in the basement of the Sheldonian Theatre, and the compositors could not work when the Theatre was in use for ceremonies.

The building was financed largely from the proceeds of the commercially successful History of the Great Rebellion by Edward Hyde, 1st Earl of Clarendon, whose money also paid for the building of the Clarendon Laboratory in Oxford.

On 22 January 2009, student demonstrators occupied part of the Clarendon Building for seven hours,[3] following similar protests at other UK universities.[4] The demonstrators, who were calling for the University to condemn Israel's role in the 2008–2009 Israel–Gaza conflict and to cancel a lecture series at Balliol College inaugurated by Shimon Peres,[3] ended their protest after an agreement with the Senior Proctor.[5][6]