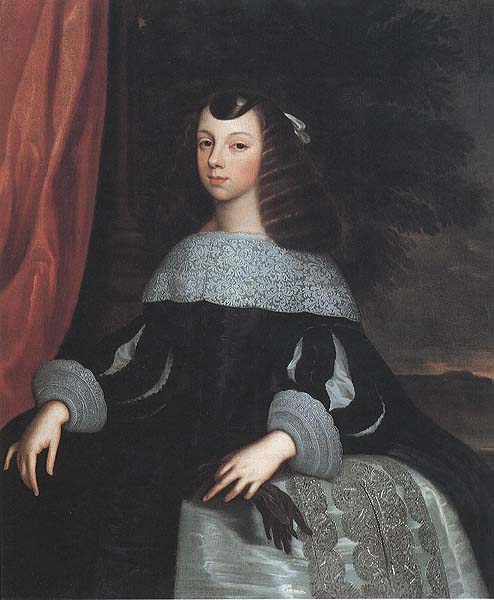 Infanta Catarina of Portugal (or of Braganza) was born in as the second surviving daughter of (at the time ) and his wife, Luisa de Guzmán, a daughter of the duke of Medina-Sidonia. Through her mother, Catherine was a 2nd great granddaughter of . Although she was raised in a convent, Catherine's upbringing and education were closely supervised by her mother.

Following the restoration of a Portuguese Royal House, and her father's accession to the throne on 1 December 1640, she was variously proposed as a bride for John of Austria, , Louis XIV and Charles II. She was seen as a useful conduit for contracting an alliance between and , after the in 1659 in which Portugal was arguably abandoned by . Upon Charles' restoration to the English throne in 1660, Catherine's mother reopened negotiations with his counselors, and a marriage treaty was signed 23 June 1661.

She was married by proxy in Lisbon on 23 April 1662. After her arrival at on 14 May 1662, the couple were married in two more ceremonies – a Catholic one conducted in secret, followed by a public Anglican service – on 21 May.

Her large dowry brought the port cities of and to British control. The former had only a transitory significance, but the latter had a major lasting influence on both the development of the and the , as the British would develop Bombay - which had only 10,000 inhabitants under the Portuguese - into a major centre of commerce.

At the time, she was not a particularly popular choice of queen, being a , and her religion prevented her from ever being crowned, since Roman Catholics were forbidden to take part in services. She initially faced hardships due to the language barrier, the king's infidelities and the political conflicts between Roman Catholics and Anglicans. Over time, her quiet decorum, loyalty and genuine affection for Charles changed the public's perception of her.

Catherine became pregnant and miscarried at least twice, and during a severe illness in 1663 she thought for a time she had given birth. Charles comforted her by telling her she had indeed given birth to two sons and a daughter. Her position was a difficult one, as Charles continued to have children by his many mistresses, but he insisted that she be treated with respect, and sided with her over his mistresses in those cases where he felt she was not receiving the respect she was due. Throughout his reign, he firmly dismissed the idea of divorcing Catherine, even when exerted pressure on him to beget or declare a successor.

Though known to keep her faith a private matter, her religion and proximity to the king made her the target of anti-Catholic sentiment. In 1678, the murder of Sir Edmund Godfrey was ascribed to several of her servants. In November of the same year she was accused by , an instigator of the "", of being part of a conspiracy to poison the king, even though Charles himself disbelieved the entirety of the plot. Although both the evidence in her case and the Popish Plot were later discovered to be fabrications, the House of Commons voted unsuccessfully for an address calling for the Queen and her household to be banished from Whitehall. In 1679 she was defended against the allegations by the king himself.

At Charles' final illness in 1685 she showed anxiety for his reconciliation with the Roman Catholic faith, and exhibited great grief at his death. Later in the same year, she unsuccessfully interceded with James II for the life of , Charles's illegitimate son and leader of the . Catherine remained in England, living at , through the reign of James and his deposition in the by William III and Mary II. Initially on good terms with William and Mary, her position deteriorated as the practice of her religion led to misunderstandings and increasing isolation. A bill was introduced to Parliament to limit the number of Catherine's Catholic servants, and she was warned not to agitate against the government. She finally returned to Portugal in March 1692.

Catherine introduced the custom of drinking tea in England, a custom that was already very popular among the Portuguese nobility at the time. The tea had been imported to from the Portuguese posessions in Asia as well as through the trade Portuguese merchants maintained with and .

Although some have claimed that , a borough of , was named after Catherine of Braganza, her name is not mentioned in the first 200 years of historical documents that have been preserved in the county archives.

Because it was alleged that the Queen and her family had profited from the slave trade a recent effort to build a 10 m (33 ft)-tall statue in her honour in Queens was defeated by local , and community groups. [ [http://www.queenstribune.com/anniversary2003/queenscatherine.htm Catherine Of Braganza: The Fall Of A Queen] , ] A quarter-scale model survives at the site of , in , , facing Queens across the .