/ˈwɪltʃər/ or /ˈwɪltʃɪər/, formerly /ˈwɪlʃər/; or the County of Wilts) is a ceremonial county in South West England. It is landlocked and borders the counties of Dorset, Somerset, Hampshire, Gloucestershire, Oxfordshire and Berkshire. It contains the unitary authority of Swindon and covers 3,485 km2 (861,000 acres).[2] The ancient county town was Wilton, but since 1930 Wiltshire County Council and its successor Wiltshire Council (from 2009) have been based at Trowbridge.

Wiltshire is characterised by its high downland and wide valleys. Salisbury Plain is famous as the location of the Stonehenge and Avebury stone circles and other ancient landmarks and as the main training area in the UK of the British Army. The city of Salisbury is notable for its medieval cathedral. Important country houses open to the public include Longleat, near Warminster, and the National Trust's Stourhead, near Mere.

The county, in the 9th century written as Wiltunscir, later Wiltonshire, is named after the former county town of Wilton,[3] itself named after the river Wylye, one of eight rivers which drain the county. 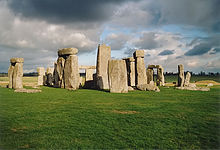 Wiltshire is notable for its pre-Roman archaeology. The Mesolithic, Neolithic and Bronze Age people that occupied southern Britain built settlements on the hills and downland that cover Wiltshire. Stonehenge and Avebury are perhaps the most famous Neolithic sites in the UK.

In the 6th and 7th centuries Wiltshire was at the western edge of Saxon Britain, as Cranborne Chase and the Somerset Levels prevented the advance to the west. The Battle of Bedwyn was fought in 675 between Escuin, a West Saxon nobleman who had seized the throne of Queen Saxburga, and King Wulfhere of Mercia.[4] In 878 the Danes invaded the county. Following the Norman Conquest, large areas of the country came into the possession of the crown and the church.

At the time of the Domesday Survey the industry of Wiltshire was largely agricultural; 390 mills are mentioned, and vineyards at Tollard and Lacock. In the succeeding centuries sheep-farming was vigorously pursued, and the Cistercian monasteries of Kingswood and Stanley exported wool to the Florentine and Flemish markets in the 13th and 14th centuries.

In the 17th century English Civil War Wiltshire was largely Parliamentarian. The Battle of Roundway Down, a decisive Royalist victory, was fought near Devizes.

Around 1800 the Kennet and Avon Canal was built through Wiltshire providing a route for transporting cargoes from Bristol to London until the development of the Great Western Railway.

Information on the 261 civil parishes of Wiltshire is available on the Wiltshire Community History website, run by the Libraries and Heritage services of Wiltshire County Council. This site includes maps, demographic data, historic and modern pictures and short histories.

The local nickname for Wiltshire natives is moonrakers. This originated from a story of smugglers who managed to foil the local Excise men by hiding their alcohol, possibly French brandy in barrels or kegs, in a village pond. When confronted by the excise men they raked the surface in order to conceal the submerged contraband with ripples, and claimed that they were trying to rake in a large round cheese visible in the pond, really a reflection of the full moon. The officials took them for simple yokels or mad and left them alone, allowing them to continue with their illegal activities. Many villages claim the tale for their own village pond, but the story is most commonly linked with The Crammer in Devizes.[5][6] 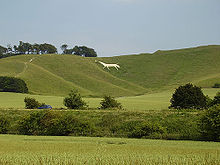 Two thirds of Wiltshire, a mostly rural county, lies on chalk, a kind of soft, white, porous limestone that is resistant to erosion, giving it a high chalk downland landscape. This chalk is part of the Southern England Chalk Formation that underlies large areas of Southern England from the Dorset Downs in the west to Dover in the east. The largest area of chalk in Wiltshire is Salisbury Plain, a semi-wilderness used mainly for arable agriculture and by the British Army as training ranges. The highest point in the county is the Tan Hill–Milk Hill ridge in the Pewsey Vale, just to the north of Salisbury Plain, at 295 m (968 ft) above sea level.

The chalk uplands run northeast into West Berkshire in the Marlborough Downs ridge, and southwest into Dorset as Cranborne Chase. Cranborne Chase, which straddles the border, has, like Salisbury Plain, yielded much Stone Age and Bronze Age archaeology. The Marlborough Downs are part of the North Wessex Downs AONB (Area of Outstanding Natural Beauty), a 1,730 km2 (668 square mile) conservation area.

In the northwest of the county, on the border with South Gloucestershire and Bath and North East Somerset, the underlying rock is the resistant oolite limestone of the Cotswolds. Part of the Cotswolds AONB is also in Wiltshire, in the county's northwestern corner.

Between the areas of chalk and limestone downland are clay valleys and vales. The largest of these vales is the Avon Vale. The Avon cuts diagonally through the north of the county, flowing through Bradford on Avon and into Bath and Bristol. The Vale of Pewsey has been cut through the chalk into Greensand and Oxford Clay in the centre of the county. In the south west of the county is the Vale of Wardour. The southeast of the county lies on the sandy soils of the northernmost area of the New Forest.

Chalk is a porous rock so the chalk hills have little surface water. The main settlements in the county are therefore situated at wet points. Notably, Salisbury is situated between the chalk of Salisbury Plain and marshy flood plains.

Along with the rest of South West England, Wiltshire has a temperate climate which is generally wetter and milder than the rest of the country.[7] The annual mean temperature is approximately 10 °C (50.0 °F). Seasonal temperature variation is less extreme than most of the United Kingdom because of the adjacent sea temperatures. The summer months of July and August are the warmest with mean daily maxima of approximately 21 °C (69.8 °F). In winter mean minimum temperatures of 1 °C (33.8 °F) or 2 °C (35.6 °F) are common.[7] In the summer the Azores high pressure affects the south-west of England, however convective cloud sometimes forms inland, reducing the number of hours of sunshine. Annual sunshine rates are slightly less than the regional average of 1,600 hours.[7] In December 1998 there were 20 days without sun recorded at Yeovilton. Most the rainfall in the south-west is caused by Atlantic depressions or by convection. Most of the rainfall in autumn and winter is caused by the Atlantic depressions, which is when they are most active. In summer, a large proportion of the rainfall is caused by sun heating the ground leading to convection and to showers and thunderstorms. Average rainfall is around 700 mm (28 in). About 8–15 days of snowfall is typical. November to March have the highest mean wind speeds, and June to August have the lightest winds. The predominant wind direction is from the south-west.[7]

This is a chart of trend of regional gross value added (GVA) of Wiltshire at current basic prices[8] with figures in millions of British Pounds Sterling.

The Wiltshire economy benefits from the "M4 corridor effect", which attracts business, and the attractiveness of its countryside, towns and villages. The northern part of the county is richer than the southern part, particularly since Swindon is home to national and international corporations such as Honda, Intel, Motorola, Alcatel-Lucent, Patheon, Catalent (formerly known as Cardinal Health), Becton-Dickinson, WHSmith, Early Learning Centre and Nationwide, with Dyson located in nearby Malmesbury. Wiltshire’s employment structure is distinctive in having a significantly higher number of people in various forms of manufacturing (especially electrical equipment and apparatus, food products, and beverages, furniture, rubber, pharmaceuticals, and plastic goods) than the national average.

In addition, there is higher than average employment in public administration and defence, due to the military establishments around the county, particularly around Amesbury and Corsham. There are sizeable British Army barracks at Tidworth, Bulford and Warminster, and further north RAF Lyneham is home to the RAF's Hercules C130 fleet. Wiltshire is also distinctive in having a high proportion of its working age population who are economically active – (86.6% in 1999–2000), and its low unemployment rates. The gross domestic product (GDP) level in Wiltshire did not reach the UK average in 1998, and was only marginally above the rate for South West England.[13]

Wiltshire has twenty-nine county secondary schools, publicly funded, of which the largest is Warminster Kingdown, and another thirteen independent secondaries, including Marlborough College, St Mary's Calne, and Dauntsey's. The county schools are nearly all comprehensives, with the older pattern of education surviving only in Salisbury, which has two grammar schools (South Wilts Grammar School for Girls and Bishop Wordsworth's School) and three secondary moderns. All but two of the county secondary schools in the former districts of West Wiltshire and North Wiltshire have Sixth forms, but only half of those in the rest of the county.

As yet there are no universities within Wiltshire, except that Bath Spa University has a small campus at Corsham Court and Oxford Brookes University maintains a minor campus in Swindon (almost 50 km from Oxford). Early outline plans for a projected University of Swindon or University of Wiltshire were announced by the Borough of Swindon in November 2008, but the scheme remains uncommitted. Swindon is the UK's largest centre of population without its own university. The closest university to Wiltshire's county town of Trowbridge is the University of Bath. Wiltshire is therefore one of the few remaining English counties, including Herefordshire and Northumberland, without a university or university college.

Until the 2009 structural changes to local government in England, Wiltshire (apart from Swindon) was a two-level county, divided into four local government districts, Kennet, North Wiltshire, Salisbury and West Wiltshire, which existed alongside Wiltshire County Council, covering the same area and carrying out more strategic tasks, such as education and county roads. However, on 1 April 2009 these five local authorities were merged into a single unitary authority called Wiltshire Council. With the abolition of the District of Salisbury, a new Salisbury City Council was created at the same time to carry out several city-wide functions and to hold the City's charter.

As a result of elections held in 2009, Wiltshire Council comprises 61 Conservatives, 24 Liberal Democrats, eight Independents, three Devizes Guardians and two Labour members. The council is led by Jane Scott (Conservative), who had previously led the former Wiltshire County Council since 2003.

The county is represented in the Football League by Swindon Town, who play at the County Ground stadium near Swindon town centre. They joined the Football League on the creation of the Third Division in 1920, and have remained in the league ever since. Their most notable achievements include winning the Football League Cup in 1969 and the Anglo-Italian Cup in 1970, two successive promotions in 1986 and 1987 (taking them from the Fourth Division to the Second), promotion to the Premier League as Division One play-off winners in 1993 (as inaugural members), the Division Two title in 1996, and their recent promotion to League One in 2007 after finishing third in League Two.

Salisbury City played in the Conference Premier League however they entered administration in the Summer of 2009 and now play in the Southern League Premier Division as of Summer 2010 due to a breach of Conference rules. They are currently two leagues under Conference National Level.

Swindon Robins Speedway team, who compete in the Sky Elite League, have been at their track at the Blunsdon Abbey Stadium since 1949.

Rich Benke, the international snowboarder, hails from Chippenham in Wiltshire. He currently resides in Whistler, Canada.

Wiltshire has twenty-one towns and one city: 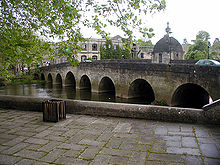 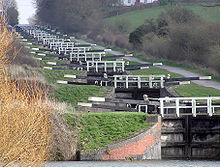 The flight of 16 locks at Caen Hill on the Kennet and Avon Canal.

Places of interest in Wiltshire include

Areas of countryside in Wiltshire include

Roads running through Wiltshire include The Ridgeway, an ancient route, and Roman roads the Fosse Way, London to Bath road and Ermin Way. National Cycle Route 4 and the Thames Path, a modern long distance footpath, run through the county.

Routes through Wiltshire include:

The major junction stations are Salisbury and Westbury, and important junctions are also found at Swindon and Trowbridge.