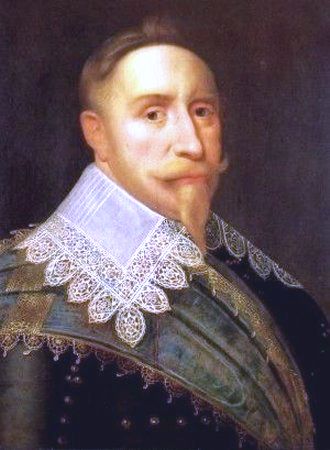 FixHTML|mid Gustav II Adolf, (9 December 1594 – 6 November 1632 (O.S.) [ See )] or Gustav II Adolphus, widely known in English by the ized name Gustavus Adolphus and variously in historical writings sometimes as simply just Gustavus, or Gustavus the Great, or Gustav Adolf the Great, ( _sv. Gustav Adolf den store, from the special distinction passed by the Swedish Parliament in 1634), was founder of the (or "Stormaktstiden &mdash; "the era of great power") at the beginning of what is widely regarded as the Golden Age of Sweden.

In the era, which was characterized by nearly endless warfare, he led his armies as King of Sweden&mdash;from 1611, as a seventeen year old, until his death in battle while leading a charge during 1632 in the bloody &mdash;as Sweden rose from the status as a mere and run of the mill kingdom to one of the s of Europe and a model of government. Sweden expanded to become the third biggest nation in Europe after Russia and Spain within only a few years during his reign. Some have called him the "father of modern warfare", or the first great modern general. It is indisputable that under his tutelage, Sweden and the Protestant cause developed a host of good generals&mdash;who continued to expand the empires' strength and influence long after his death in battle.

He is, and was even during his own time (The Italians referred to him as "The Golden King" and others as "The Lion of the North"), widely regarded as the of what a king should be and one of the few European kings and sovereign princes during the seventeenth century worthy of the office. He was, unquestionably, one of the greatest military s in all of history, and his battles were studied assiduously by later great military figures such as ; ; ; and , as they are still taught in courses today. Gustavus Adolphus is today immortalised in two city squares, one in Stockholm and the other in Gothenburg, both named in Swedish "Gustav Adolfs torg".

Gustavus Adolphus was born in as the oldest son of King of the Vasa dynasty and his second wife, . Upon his father's death in #expr:1594+17, a seventeen year-old Gustav inherited the throne, as well as an ongoing succession of occasionally belligerent dynastic disputes with his Polish cousin, Sigismund III of Poland, who in the preliminary religious strife before the , was forced to let go of the throne of Sweden to Gustav's father. Sigismund III wanted to regain the throne of Sweden and tried to force Gustav Adolph to renounce the title.

In a round of this dynastic dispute, he invaded Livonia when he was #expr:1625-1594, beginning the . He intervened on behalf of the Lutherans in Prussia, who opened the gates to their cities. His reign became famous from his actions a few years later when in June 1630 he landed in Germany, continuing Sweden's involvement in the ongoing . Gustavus intervened on the anti-Imperial side, which at the time was losing to the Holy Roman Empire and its Catholic allies; the Swedish forces would quickly reverse that situation.

He was married to , the daughter of , and chose the n city of as the base for his operations in . He died in the Battle of Lützen in 1632. His early death was a great loss to the Lutheran side, it prolonged the war for many years. It resulted in large parts of Germany and other countries, who for a large part had become Lutheran in faith,to be forced into Catholicism (via ). His involvement in the Thirty Years' War gave rise to the old prophecy that he was the incarnation of "the Lion of the North", or as it is called in German "Der Löwe von Mitternacht" ("Literally: "The Lion from Midnight").

Legacy as a general

Gustavus Adolphus was known as an able military commander. His innovative tactical integration of infantry, cavalry, artillery and logistics earned him the title of the "Father of Modern Warfare". Future commanders who studied and admired Gustav II Adolf include and . His advancements in military science made Sweden the dominant Baltic power for the next one hundred years ("see "). He is also the only Swedish monarch to be styled "the Great". This decision was made by the Swedish Estates of the Realm, when they convened in 1633. Thus, by their decision he is officially, to this day, to be called Gustaf Adolf the Great ("Gustavus Adolphus Magnus").

Gustavus Adolphus was the main figure responsible for the success of Sweden during the Thirty Years' War and led his nation to great prestige. As a , Gustavus Adolphus is famous for employing mobile on the battlefield, as well as very aggressive tactics, where attack was stressed over defense, and mobility and cavalry initiative were emphasized.

Among other innovations, he installed an early form of in his formations where the cavalry could attack from the safety of a infantry line reinforced by canon, and retire again within to regroup after their foray. He adopted much shallower infantry formations than were common in the armies of the era, with formations typically fighting in 5 or 6 ranks, occasionally supported at some distance by another such formation&mdash;the gaps being the provinces of the artillery and cavalry as noted above. His artillery were themselves different&mdash;he would not let himself be hindered by cumbersome heavy cannon, but instead over a course of experimentation settled on smaller more maneuverable weapons, in effect fielding the first light field artillery in history in any significant ratios.

These grouped in batteries, supported his more linearly deployed formations, the whole in his armies replaced the cumbersome and unmaneuverable traditional deep squares up to 50 ranks deep (Spanish s), used in other pike and shot armies of the day. In consequence, his forces could redeploy and reconfigure extremely rapidly confounding his enemies.

His armies were very well trained for the day, so that his s were widely known for their firing accuracy and reload speed: three times faster than any contemporary rivals. and Napoleon Bonaparte considered him one of the greatest generals of all time&mdash; a sentiment agreed to by Patton and others. He was also renowned for the consistency of purpose and the amity of his troops&mdash;no one part of his armies were considered better or received preferred treatment as was common in other armies where the cavalry were the elite, followed by the artillerist, and both disdained the lowly infantry. In a Gustavus' army, the units were extensively cross trained. Both cavalry and infantry could service the artillery&mdash; as his heavy cavalry did when turning captured artillery on the opposing Catholic Tercios at First Breitenfeld; pikemen could shoot&mdash;if not as accurately as those designated muskateers so a valuable firearm could be kept in the firing line, and his infantrymen and gunners were taught to ride, if needed. Napoleon thought highly of the achievement, and copied the tactics.

When Gustavus Adolphus began his push into northern in June-July 1630, he had just 4,000 troops. But he was soon able to consolidate the position in the north. Meanwhile, a Catholic army was laying waste to . Gustavus Adolphus met and defeated it at the First Battle of Breitenfeld in September 1631, in spite of the collapse of his Saxon allies. He then made plans for the invasion of the rest of the .

In March 1632, Gustavus Adolphus invaded . He forced the withdrawal of his Catholic opponents at the . This would mark the high point of the campaign. In the summer of that year, he sought a political solution that would preserve the existing structure of states in Germany, while guaranteeing the security of its Protestants. But achieving these objectives depended on his continued success on the battlefield.

Gustavus Adolphus was killed at the Battle of Lützen, when, at a crucial point in the battle, he became separated from his troops while leading a cavalry charge into a dense of mist and gunpowder smoke. After his death, his wife initially kept his body, and later his heart, in her castle for over a year. His remains (including his heart) now rest in in Stockholm.

In February 1633, following the death of the king, the Swedish decided that his name would be styled Gustav Adolf the Great (or "Gustaf Adolf den Store" in Swedish). No such honor has been bestowed on any other Swedish monarch since.

The crown of Sweden was inherited in the Vasa family, and from Charles IX's time excluded those Vasa princes who had been traitors or descended from deposed monarchs. Gustavus Adolphus' younger brother had died years before, and therefore there were only female heirs left. Maria Eleonora and the king's ministers took over the government on behalf of Gustavus Adolphus' underage daughter Christina upon her father's death. He left one other known child, his illegitimate son Gustav, Count of Vasaborg.

The German Socialist (1846–1919) wrote a biography of Gustavus Adolphus with a perspective on the actions of the Swedish king during the Thirty Years' War. In it, he makes a case that the war was fought over economics and trade rather than religion.

In his book "Ofredsår" ("Years of Warfare"), the Swedish historian and author argues that there was probably no single all-important reason for the king's decision to go to war. Instead, it was likely a combination of religious, security, as well as economic considerations.

Gustav II Adolf's success in making Sweden one of the top nations in Europe, and perhaps the most important nation in the Thirty Years' War, was not only due to military brilliance but large changes in the Swedish system of government. For example, he was the creator of the first in the world, , and the first in the world to start with registration.

*July 1626. Gustavus Adolphus and his army disembark at , , during the .
*, . The King is seriously wounded in the battle of Dirschau ().
*June 1629 his troops meet up with imperial troops under , who used to serve under Gustav Adolph, and is ordered by emperor to aid .
*May 1630 and Gustav Adolph lands in .
*September 1631. At the Battle of Breitenfeld, Gustavus Adolphus decisively defeats the Catholic forces led by Tilly, even after the allied Protestant Saxon army had been routed and fled with the baggage train.
*April 1632. At the , Gustavus Adolphus defeats Tilly once more, and in the battle Tilly sustains a fatal wound.
*May 1632. Munich yields to the Swedish army.
*September 1632. Gustavus Adolphus attacks the stronghold of Alte Veste, which is under the command of Wallenstein, but is repulsed, marking the first defeat in the Thirty Years' War of the previously invincible Swedes. This leads to defection of some mercenary elements in the Protestant army.
*November 1632. At the Battle of Lützen, Gustavus Adolphus is killed but the Swedes win the day, thanks to , who assumed command, and defeat Wallenstein. The Swedish war effort was kept up by generals Gustav Horn, , and chancellor until the .

A history of Gustavus Adolphus' wars was written by .

Gustavus Adolphus Day is celebrated in Sweden each year on . On this day only a special pastry, with a chocolate or marzipan medallion of the king, is sold. The day is also an official flag day in the Swedish calendar. In , the day is celebrated as "svenska dagen" or "ruotsalaisuuden päivä", "Swedishness Day", and is a customary flag day. In both countries, is the for Gustav Adolf, one of the few exceptional name days in the year.

*Gustavus Adolphus plays an important supporting role in 's , living beyond his battle death after being warned by the Americans, fitted with eye-glasses, and becomes Emperor of the United States of Europe.