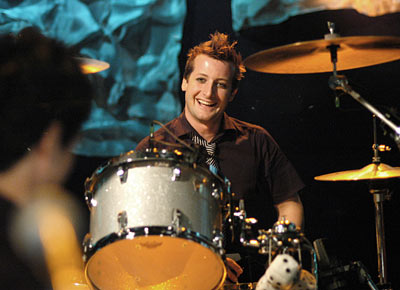 Tré Cool (born Frank Edwin Wright III, , in Frankfurt, ) is the of the band . He replaced the band's former drummer .

Frank Edwin Wright III was born December 9, 1972 in , , making him the youngest member of Green Day. He lived in Willits, California with his father and his two older siblings. His father, a helicopter pilot in the , decided to move the family there to insulate them upon his return to the United States.

Wright's closest neighbor was future owner Larry Livermore, who at the time was the singer of the punk band The Lookouts. At age 12, Livermore recruited Wright to join The Lookouts, and gave him the name of Tré Cool, which he believed to mean "very cool" in French (the French word for "very" is "très" [ [http://dictionary.reverso.net/french-english/tr%C3%A8s très] Reverso French-English Dictionary] ). When Green Day's drummer Al Sobrante left the band they recruited Cool to play drums. Cool decided to drop out of high school his sophomore year. However, he passed an equivalency test and earned his GED, and began taking classes at a nearby community college. He had to drop out of college however, when the demands of Green Day's touring intensified.

Cool's father, who owned a small company, overhauled a used bookmobile, and even served as the driver on three separate tours. "I watched them go from a bunch of kids to a group of musicians with work ethic," says Cool's father, Frank Wright II. "On their first tour or two, it was more of a party than anything else. I still scratch my head and say, 'How in the hell did they make it?' They used to practice in my living room here — a lot of the songs they did on Dookie. You hear it coming together, and you don't expect people are going to go out and buy it. But when it does, you just say, 'Wow, that's so cool.'"

Tré sings and plays guitar on the tracks "" and "", from "" and "", respectively. He wrote the subtrack "" from the "" featured on the album "". He also sang and composed the track "DUI" ("Driving Under the Influence"), which was recorded during the "Nimrod" sessions, and was due to be released on "Shenanigans" (a compilation of B-sides), but was omitted on the US version of the album. It was, however, released on the Japanese version.

During a radio interview at Washington DC's alternative station , Tré sang and played the guitar to a short song titled "", a song about the pleasure of .

Several live tracks also exist, usually from early dates around 1993, such as "", a song from the 1943 cartoon "An Itch in Time". Another live track "" was also recorded.

Green Day recently recorded a version of 's "" with Tré Cool singing and Billie Joe on drums. Cool posted it on on , . His cover was mentioned in several news journals. [cite web|url=http://www.eonline.com/news/article/index.jsp?uuid=151be882-67a1-443e-9a05-2eee53b2db58&entry=index|title=The "Chocolate" Reign of Tay Zonday|author=Joal Ryan|date=, |accessdate=2007-08-10]

Tre married his long time girlfriend Lisea Lyons in March of 1995 and had a child called Ramona Isabelle on January 12, 1995. They divorced sometime after. In May 2000, he married Claudia. In 2003, he and Claudia broke up. Frankito ("Little Frank"), born 2001 to Claudia.