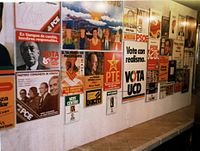 Political posters in an exhibition celebrating 20 years of the Spanish Constitution of 1978.

Constituent Cortes (Spanish: Cortes constituyentes) is the description of Spain's parliament, the Cortes, when convened as a constituent assembly.

In the 20th century, only one Constituent Cortes was officially opened (Cortes are "opened" in accordance with a mediaeval royal proclamation), and that was the Republican Cortes in 1931.

The Cortes in 1977 enacted the new Spanish constitution. However, it was never officially considered "constituent", as the assembly chosen in the 1977 general elections was not mandated to consider a new constitution, but to rule under the constitution of the former dictatorship - the so called Leyes Fundamentales (fundamental laws). However, there was significant pressure from King Juan Carlos for the 1977 Cortes to draft a new constitution, and it is consequently frequently treated much like a constituent Cortes.