Not to be confused with Antipope Clement VIII.

He was made Cardinal-Priest of S. Pancrazio in 1585 by Pope Gregory XIII. Pope Sixtus V named him major penitentiary in January 1586 and in 1588 sent him as legate in Poland. He placed himself under the direction of the reformer Philip Neri, who for thirty years was his confessor. Aldobrandini won the gratitude of the Habsburgs by his successful diplomatic efforts in Poland to obtain the release of the imprisoned Archduke Maximilian, the defeated claimant to the Polish throne. 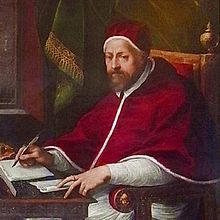 After the death of Pope Innocent IX (1591), another stormy conclave ensued, where a determined minority of Italian Cardinals were unwilling to be dictated to by Philip II of Spain. Cardinal Aldobrandini's election on 30 January 1592, was received as a portent of more balanced and liberal Papal policy in European affairs. He took the non-politicised name Clement VIII. He proved to be an able Pope, with an unlimited capacity for work and a lawyer's eye for detail, and a wise statesman, the general object of whose policy was to free the Papacy from its dependence upon Spain.

In 1597, he established the Congregatio de Auxiliis which was to settle the theological controversy between the Dominican Order and the Jesuits concerning the respective role of efficacious grace and free will. Although the debate tended toward a condemnation of Molinism's insistence on free will to the detriment of efficacious grace, the important influence of the Jesuit Order — among other considerations — which, beside important political and theological power in Europe, had also various missions abroad (Jesuit Reducciones in South America, missions in China, etc.), led the Pope to abstain from an official condemnation of the Jesuits. In 1611 and again in 1625 a decree prohibited any discussion of the matter, although it was often informally avoided by the publication of commentaries on Thomas Aquinas.

During the jubilee of 1600, three million pilgrims visited the holy places. The Synod of Brest was held 1595 in Lithuania, by which a great part of the Ruthenian clergy and people were reunited to Rome.

Clement VIII presided at the conferences to determine the questions of grace and free will, controverted between the Jesuits and Dominicans, were commenced under him, but he abstained from pronouncing a decision.

The most remarkable event of Clement VIII's reign was the reconciliation to the Church of Henry IV of France (1589–1610), after long negotiations, carried on with great dexterity through Cardinal Arnaud d'Ossat, that resolved the complicated situation in France. Henry embraced Catholicism on 25 July 1593. After a pause to assess Henry IV's sincerity, Clement VIII braved Spanish displeasure, and in the autumn of 1595 he solemnly absolved Henry IV, thus putting an end to the thirty years' religious war in France and winning a powerful ally.

Expansion of the Papal States

Henry IV's friendship was of essential importance to the Papacy two years later, when Alfonso II, Duke of Ferrara, died childless (27 October 1597), and the Pope resolved to attach the stronghold of the Este family to the states of the Church. Though Spain and the Empire encouraged Alfonso II's illegitimate cousin, Cesare d'Este, to withstand the Pope, they were deterred from giving him any material aid by Henry IV's threats, and a papal army entered Ferrara almost unopposed.

In 1598 Clement VIII won more credit for the papacy by bringing about a definite treaty of peace between Spain and France in the Peace of Vervins which put an end to their long contest, and he negotiated peace between France and Savoy as well.

War with the Ottoman Empire

In 1595, Clement VIII initiated an alliance of Christian European powers to take part in the war with the Ottoman Empire, fought mainly in Hungary, which would become known as ""The Long War" and would continue past Clement's own lifetime. Facilitated by the Pope, a treaty of alliance was signed in Prague by the Holy Roman Emperor, Rudolf II and Sigismund Báthory of Transylvania. Aron Vodă of Moldavia and Michael the Brave of Wallachia joined the alliance later that year. Clement VIII himself lent the Emperor valuable assistance in men and money.

Clement VIII was as vigorous as Pope Sixtus V (1585–90) in crushing banditry in the papal provinces of Umbria and the Marche and in punishing the lawlessness of the Roman nobility. Upon his ascension to the papal throne in 1592, he immediately had several noble troublemakers put to death. These included most famously Troio Savelli, scion of a powerful ancient Roman family, and the youthful and noble Beatrice Cenci, who had murdered her father - probably as a consequence of his repeated abuses. The latter case prompted many requests of clemency - rejected by the Pope, who passed the confiscated Cenci property to his own family.

Clement's strict ways also concerned philosophical and religious matters. In 1599 he ordered the Italian miller Menocchio - who had formed the belief that God was not eternal but had Himself once been created out of chaos - to be burned at the stake. A more famous case was the trial for heresy of the philosopher Giordano Bruno, who was burned at the stake in 1600, to the lasting horror of liberal contemporaries and historians. Pope Clement VIII participated personally in the final phases of the trial, inviting the Cardinals in charge of the case to proceed with the verdict, in practice condemning Bruno to death. 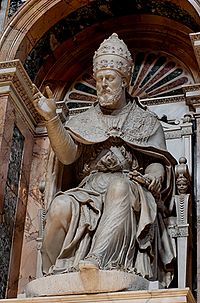 Clement VIII was afflicted by gout, and was forced to spend much of his later life immobilized in bed. He died in March of 1605, leaving a reputation for prudence, munificence, ruthlessness and capacity for business. Clement was buried in St. Peter's Basilica, and later Pope Paul V (1605–21) had a mausoleum built for him in the Borghese Chapel of Santa Maria Maggiore, where the remains were transferred in 1646.

His reign is especially distinguished by the number and beauty of his medals. Clement VIII founded the Collegio Clementino for the education of the sons of the richer classes, and augmented the number of national colleges in Rome by opening the Collegio Scozzese for the training of missionaries to Scotland.

Coffee aficionados often claim that the spread of its popularity is due to Pope Clement VIII's influence. Being pressured by his advisers to declare coffee the "bitter invention of Satan" because of its popularity among Muslims and it being a sort of antithesis or substitute for wine (which was used in the Eucharist), upon tasting it he instead declared that, "This devil's drink is so delicious...we should cheat the devil by baptizing it." The year often cited is 1600. It is not clear whether this is a true story, but it may have been found amusing at the time. [1]

Pope Clement VIII appears as one of dramatis personae in the album The Metal Opera (2000) by German heavy metal band Avantasia, where he plays vital role in the fantasy-styled plot. However the character is rather loosely based on the real person, and as such the Pope is shown in rather negative light, impersonating hipocrisy, intolerance and blind lust for power.[citation needed]

According to the Polish legend, Clemens was a became a fan of beer made in Warka. While he got sick in Rome, he asked for "piva di Varva" (beer from Warka); the monks around him though he was praying thus chanted "Santa Piva ora pro nobi" (Saint Beer; pray for us).[citation needed]