Pope Saint Pius V (17 January 1504 – 1 May 1572), born Antonio Ghislieri (from 1518 called Michele Ghislieri, O.P.), was Pope from 1566 to 1572 and is a saint of the Catholic Church.[1] He is chiefly notable for his role in the Council of Trent, the Counter-Reformation, and the standardization of the Roman liturgy within the Latin Church. Pius V declared saint Thomas Aquinas a Doctor of the Church and patronized prominent sacred music composer Giovanni Pierluigi da Palestrina.

As Cardinal Ghislieri he gained a reputation for putting orthodoxy before personalities, prosecuting eight French Bishops for heresy. He also stood firm against nepotism, rebuking his predecessor Pope Pius IV to his face when he wanted to make a 13-year old member of his family a cardinal and subsidise a nephew from the Papal treasury.

In affairs of state, Pius V excommunicated Elizabeth I of England for schism and persecutions of English Catholics during her reign. He also arranged the formation of the Holy League, an alliance of Catholic states. Although outnumbered, the Holy League famously defeated the Ottomans, who had threatened to overrun Europe, at the Battle of Lepanto. This victory Pius V attributed to the intercession of the Blessed Virgin Mary and instituted the feast, Our Lady of Victory.

Antonio Ghislieri was born at Bosco in the Duchy of Milan (now Bosco Marengo in the province of Alessandria, Piedmont), Italy. At the age of fourteen he entered the Dominican Order, taking the name Michele, passing from the monastery of Voghera to that of Vigevano, and thence to Bologna. Ordained priest at Genoa in 1528, he was sent by his order to Pavia, where he lectured for sixteen years. At Parma he advanced thirty propositions in support of the papal chair and against the heresies of the time. As prior of more than one Dominican priory during a time of great moral laxity, he insisted on discipline, and, in accordance with his own wishes, he was appointed inquisitor at Como. As his reformist zeal provoked resentment, he was compelled to return to Rome in 1550, where, after having been employed in several inquisitorial missions, he was elected to the commissariat of the Holy Office. Pope Paul IV (1555–59), who, as Cardinal Carafa, had shown him special favor, conferred upon him the bishopric of Sutri and Nepi, the cardinalate with the title of Alessandrino, and the unique honor of the supreme inquisitorship. Under Pope Pius IV (1559–65) he became bishop of Mondovi in Piedmont, but his opposition to that pontiff procured his dismissal from the palace and the abridgment of his authority as inquisitor.

Before Michele Ghislieri could return to his episcopate, Pope Pius IV died. On 7 January 1566, Ghislieri was elected to the Papal chair as Pope Pius V. He was crowned ten days later, on his 62nd birthday.

Aware of the necessity of restoring discipline and morality at Rome to ensure success without, he at once proceeded to reduce the cost of the papal court after the manner of the Dominican Order to which he belonged, compel residence among the clergy, regulate inns, expel prostitutes, and assert the importance of the ceremonial in general and the liturgy of the Mass in particular. In his wider policy, which was characterised throughout by an effective stringency, the maintenance and increase of the efficacy of the Inquisition and the enforcement of the canons and decrees of the Council of Trent had precedence over other considerations.

Accordingly, in order to implement a decision of that council, he standardised the Holy Mass by promulgating the 1570 edition of the Roman Missal. Pope Pius V made this Missal mandatory throughout the Latin rite of the Catholic Church, except where a Mass liturgy dating from before 1370 AD was in use. This form of the Mass remained essentially unchanged for 400 years until Pope Paul VI's revision of the Roman Missal in 1969–70, after which it has become widely known as the Tridentine Mass; use of the last pre-1969 edition of the Missal, that by Pope John XXIII in 1962, is permitted without limitation for private celebration of the Mass and, since July 2007, is allowed also, under certain conditions, for public use, as laid down in the motu proprio Summorum Pontificum of Pope Benedict XVI. Some continue to use even earlier editions, but without authorisation.

St Pius V recognized attacks on papal supremacy in the Catholic Church and was desirous of limiting their advancement. In France, where his influence was stronger, he took several measures to oppose the Protestant Huguenots. He directed the dismissal of Cardinal Odet de Coligny and seven bishops, nullified the royal edict tolerating the extramural services of the Reformers, introduced the Roman catechism, restored papal discipline, and strenuously opposed all compromise with the Huguenot nobility.

In the list of more important bulls issued by him the famous bull "In Coena Domini" (1568) takes a leading place; but amongst others throwing light on Pope Pius V's character and policy there may be mentioned his prohibition of quaestuary (February 1567 and January 1570); the condemnation of Michael Baius, the heretical Professor of Leuven (1567); the reform of the breviary (July 1568); the denunciation of the "dirum nefas" (August 1568); the banishment of the Jews from the ecclesiastical dominions except Rome and Ancona (1569); the injunction of the use of the reformed missal (July 1570); the confirmation of the privileges of the Society of Crusaders for the protection of the Inquisition (October 1570); the dogmatic certainty of the Immaculate Conception of the Virgin Mary (November 1570)[citation needed]; the suppression of the Fratres Humiliati for profligacy (February 1571); the approbation of the new office of the Blessed Virgin (March 1571); the enforcement of the daily recitation of the Canonical Hours (September 1571); and the purchase of assistance against the Turks by offers of plenary pardon (March 1572).

His response to the Queen Elizabeth I of England assuming governance of the Church of England included support of the imprisoned Mary, Queen of Scots, and her supporters in their attempts to take over England "ex turpissima muliebris libidinis servitute". A brief English Catholic uprising, the Rising of the North, had just failed. Pius then issued a bull, Regnans in Excelsis, dated April 27, 1570, that declared Elizabeth I a heretic and released her subjects from their allegiance to her.[3] In response, Elizabeth, who had thus far tolerated Catholic worship in private, now actively started persecuting them.

Saint Pius V arranged the forming of the Holy League against the Islamic Turks, as the result of which the Battle of Lepanto (7 October 1571) was won by the combined fleet under Don John of Austria. It is attested in his canonisation that he miraculously knew when the battle was over, himself being in Rome at the time.[4] Three national synods were held during his pontificate at Naples under Alfonso Cardinal Caraffa (whose family had, after inquiry, been reinstated by Pius V), at Milan under Saint Charles Borromeo, and at Machim.

Pius V is also often credited with the origin of the Pope's white garments, which supposedly originated because after this election Pius refused to replace his white Dominican habit with the red commonly worn by Popes and Cardinals at the time.[citation needed] 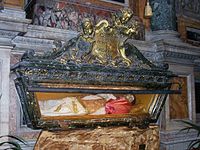 The body of Pius V in his tomb in Santa Maria Maggiore.

Pius V died on 1 May 1572. He was succeeded by Pope Gregory XIII (1572–85). In 1696, the process of Pius's canonisation was started through the efforts of the Master of the Order of Preachers, Antonin Cloche. He also immediately commissioned a representative tomb from the sculptor Pierre Le Gros the Younger to be erected in the Sistine Chapel of the Basilica di Santa Maria Maggiore. The pope's body was placed in it in 1698. St Pius V was beatified by Pope Clement X in the year 1672, and was later canonized by Pope Clement XI (1700–21) on 24 May 1712.

In the following year, 1713, his feast day was inserted in the General Roman Calendar, for celebration on 5 May, with the rank of "Double", the equivalent of "Third-Class Feast" in the General Roman Calendar of 1962, and of its present rank of "Memorial".[5] In 1969 the celebration was moved to 30 April, the day before the anniversary of his death (1 May). 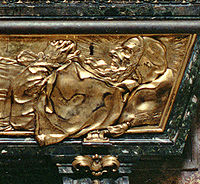 The front of his tomb has a lid of gilded bronze which shows a likeness of the dead pope. Most of the time this is left open to allow the veneration of the saint's remains.

Pope St Pius V also helped financially in the construction of the city of Valletta, Malta's capital city by sending his military engineer Francesco Laparelli to design the fortification walls.