Anthony of Padua or Anthony of Lisbon, O.F.M., (born Fernando Martins de Bulhões; 15 August 1195 – 13 June 1231)[1] was a Portuguese Catholic priest and friar of the Franciscan Order. Though he died in Padua, Italy, he was born to a wealthy family in Lisbon, Portugal, which is where he was raised. Noted by his contemporaries for his forceful preaching and expert knowledge of Scripture, he was declared a saint almost immediately after his death and proclaimed a Doctor of the Church in January 16, 1946.

Fernando Martins de Bulhões was born in Lisbon to Vicente Martins de Bulhões and Teresa Pais Taveira. His father was the brother of Pedro Martins de Bulhões, the ancestor of the Bulhão or Bulhões family. His was a very rich family of the nobility who wanted him to become educated, and they arranged for him to be instructed at the local cathedral school. Against the wishes of his family, however, he entered the community of Canons Regular at the Abbey of St. Vincent on the outskirts of Lisbon. The Canons were famous for their dedication to scholarly pursuits, and sent the youth to their major center of studies, the Abbey of the Holy Cross in Coimbra. There the young Fernando studied theology and Latin.

After his ordination to the priesthood, Fernando was named guestmaster and placed in charge of hospitality for the abbey. It was in this capacity, in 1219, that he came into contact with five Franciscan friars who were on their way to Morocco to preach the Gospel to the Muslims there. Fernando was strongly attracted to the simple, evangelical lifestyle of the friars, whose order had been founded only eleven years prior. In February of the following year, news arrived that the five Franciscans had been martyred in Morocco, the first to be killed in their new order. Seeing their bodies as they were processed back to Assisi, Fernando meditated on the heroism of these men; inspired by their example, and longing for the same gift of martyrdom, he obtained permission from church authorities to leave the Augustinian Canons to join the new Franciscan Order. Upon his admission to the life of the friars, he joined the small hermitage in Olivais, adopting the name Anthony (from the name of the chapel located there, dedicated to Saint Anthony the Great), by which he was to be known.[2]

The new Brother Anthony then set out for Morocco, in fulfillment of his new vocation. Illness, however, stopped him on his journey. At this point, he decided to head to Italy, the center of his new order.

On the voyage there, his ship was driven by a storm onto the coast of Sicily and he landed at Messina. From Sicily he made his way to Tuscany where he was assigned to a convent of the order, but he met with difficulty on account of his sickly appearance. He was finally assigned, out of pure compassion, to the rural hospice of San Paolo near Forlì, Romagna, a choice made after considering his poor health. There he appears to have lived as a hermit and was put to work in the kitchen, while being allowed to spend much time in private prayer and study.[3]

One day, on the occasion of an ordination, a great many visiting Dominican friars were present, and there was some misunderstanding over who should preach. The Franciscans naturally expected that one of the Dominicans would occupy the pulpit, for they were renowned for their preaching; the Dominicans, on the other hand, had come unprepared, thinking that a Franciscan would be the homilist. In this quandary, the head of the hermitage, who had no one among his own humble friars suitable for the occasion, called upon Anthony, whom he suspected was most qualified, and entreated him to speak whatever the Holy Spirit should put into his mouth. Anthony objected but was overruled, and his sermon created a deep impression. Not only his rich voice and arresting manner, but the entire theme and substance of his discourse and his moving eloquence, held the attention of his hearers.

At that point, Anthony was commissioned by Brother Gratian, the local Minister Provincial, to preach the Gospel throughout the area of Lombardy, in northern Italy. In this capacity he came to the attention of the founder of the order, Francis of Assisi. Francis had held a strong distrust of the place of theological studies in the life of his brotherhood, fearing that it might lead to an abandonment of their commitment to a life of real poverty. In Anthony, however, he found a kindred spirit for his vision, who was also able to provide the teaching needed by young members of the order who might seek ordination. He thereby entrusted the pursuit of studies for any of his friars to the care of Brother Anthony. From then on his skills were used to the utmost by the Church. Occasionally he took another post, as a teacher, for instance, at the universities of Montpellier and Toulouse in southern France, but it was as a preacher that Anthony revealed his supreme gift.

In 1226, after attending the General Chapter of his order held at Arles, France, and preaching in the French region of Provence, Anthony returned to Italy and served as envoy from the general chapter to Pope Gregory IX. At the Papal court, his preaching was hailed as a "jewel case of the Bible" and he was commissioned to produce his collection of sermons, Sermons for Feast Days (Sermones in Festivitates).

Anthony became ill with Edema and, in 1231, went to the woodland retreat at Camposampiero with two other friars for a respite. There Anthony lived in a cell built for him under the branches of a walnut tree. Anthony died on the way back to Padua on 13 June 1231 at the Poor Clare monastery at Arcella, aged 36.

Various legends surround the death of Anthony. One holds that when he died, the children cried in the streets and that all the bells of the churches rang of their own accord. Another legend regards his tongue. Anthony is buried in a chapel within the large basilica built to honor him, where his tongue is displayed for veneration in a large reliquary. For, when his body was exhumed thirty years after his death, it was claimed that the tongue glistened and looked as if it was still alive and moist; apparently a further claim was made that this was a sign of his gift of preaching.[4] 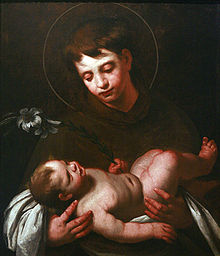 Anthony could be said to have become one of the "quickest" saints in the history of the Catholic Church because he was canonized by Pope Gregory IX on May 30, 1232, at Spoleto, Italy, less than one year after his death.[5] His fame spread through Portuguese evangelization, and he has been known as the most celebrated of the followers of Saint Francis of Assisi. He is the patron saint of his adopted home of Padua, as well as of his native Lisbon, not to mention many other places in Portugal and in the countries of the former Portuguese Empire. He is especially invoked for the recovery of lost items.[6]

Proclaimed a Doctor of the Church by Pope Pius XII on January 16, 1946, he is sometimes called the "Evangelical Doctor" (Doctor Evangelicus).

Each year on the weekend of the last Sunday in August, Boston's North End holds a feast in honor of Saint Anthony. Referred to as the "Feast of All Feasts", Saint Anthony's Feast in Boston's North End was begun in 1919 by Italian immigrants from Montefalcione, a small town near Naples, where the tradition of honoring Saint Anthony goes back to 1688. The feast has become the largest Italian religious festival in the United States.

On January 27, 1907, in Beaumont, Texas, a church was dedicated and named in honor of Saint Anthony. The church was later designated a cathedral in 1966 with the formation of the Roman Catholic Diocese of Beaumont, but was not formally consecrated. On April 28, 1974, St. Anthony Cathedral was dedicated and consecrated by Bishop Warren Boudreaux. In 2006 Pope Benedict XVI granted the cathedral the designation of minor basilica. St. Anthony Cathedral Basilica celebrated its 100th anniversary on January 28, 2007.

Seventeenth-century Spanish missionaries came across a small Native American community along what was then known as the Yanaguana River on the feast day of Saint Anthony. They renamed the river in his honor, and eventually a mission built nearby as well. This mission became the focal point of a small community that eventually grew in size and scope to become the city of San Antonio, Texas.

Saint Anthony is known in Portugal, Spain, and Brazil as a marriage saint, because there are legends of him reconciling couples. His feast day, June 13, is Lisbon's municipal holiday, celebrated with parades and marriages. (The previous day, June 12, is the Brazilian Valentine's Day.) He is one of the saints celebrated in the Brazilian Festa Junina (also known as the "São João"), along with John the Baptist and Saint Peter.

In Uvari, in Tamil Nadu, India, the church of St. Anthony is home to an ancient wooden statue that is said to have cured the entire crew of a Portuguese ship suffering from cholera. Saint Anthony is said to perform many miracles daily, and Uvari is visited by pilgrims of different religions from all over South India. Tamil Nadu Christians have great reverence for Saint Anthony and he is a popular saint there, where he is called "The Miracle Saint". Devotion to Saint Anthony is popular throughout all of India.

St Anthony is venerated all over the world as the Patron Saint for lost articles, and is credited with many miracles involving lost people, lost things and even lost spiritual goods.

As the number of Franciscan saints increased the iconography struggled to distinguish Anthony from the others. Because of a legend that he had once preached to the fish, these were sometimes used as his attribute (example). He is also often seen with a lily stalk (see above). Other conventions referred to St. Anthony's visionary fervor. Thus, one attribute in use for some time was a flaming heart (example). In 1511, Titian painted three scenes of Miracles from the life of Saint Anthony: The Miracle of the Jealous Husband, which depicts the murder of a young woman by her husband; A Child Testifying to Its Mother's Innocence; and The Saint Healing the Young Man with a Broken Limb.[7]

Another key pattern has him meditating on an open book in which the Christ Child himself appears, as in the El Greco below. Over time the child came to be shown considerably larger than the book, and some images even do without the book entirely.