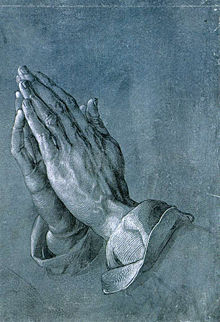 In Christianity, worship is adoration and contemplation of God. 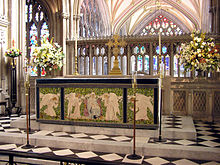 An altar (shown above) is a solid stone or wooden table used for the celebration of the Eucharist in some Christian worship rites.

Throughout most of Christianity's history, corporate Christian worship has been primarily liturgical, characterized by prayers and hymns, with texts rooted in, or closely related to, the Scripture, particularly the Psalter; this form of sacramental and ceremonial worship is still practiced by the Roman Catholic, Eastern Orthodox, and Anglican churches, as well as some Protestant denominations such as Lutheranism and Methodism. The very term liturgy is derived from the Greek leitourgia meaning "public service" and is formed by two words: "laos" (people) and "ergon" (work), literally "work of the people". Responsorial prayers are a series of petitions read or sung by a leader with responses made by the congregation. Set times for prayer during the day were established (based substantially on Jewish models), and a festal cycle throughout the Church year governed the celebration of feasts and holy days pertaining to the events in the life of Jesus, the lives of the saints, and aspects of the Church's perception of God.[citation needed]

A great deal of emphasis was placed on the forms of worship, as they were seen in terms of the Latin phrase lex orandi, lex credendi ("the rule of prayer is the rule of belief")—that is, the specifics of one's worship express, teach, and govern the doctrinal beliefs of the community. According to this view, alterations in the patterns and content of worship would necessarily reflect a change in the faith itself. Each time a heresy arose in the Church, it was typically accompanied by a shift in worship for the heretical group. Orthodoxy in faith also meant orthodoxy in worship, and vice versa. Thus, unity in Christian worship was understood to be a fulfilment of Jesus' words that the time was at hand when true worshippers would worship "in spirit and in truth" (John 4:23). This unity is still present today in Eastern Orthodoxy and to a lesser degree in Roman Catholicism. 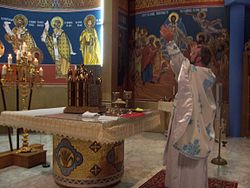 Worship at a Byzantine Catholic altar.

Subsequently the theme of worship is taken up by many of the Church Fathers including Justin Martyr, Irenaeus and Hippolytus of Rome (c. 170-c. 236), and seems to be liturgical. The Holy Eucharist was the central act of worship in early Christianity. The liturgical aspect of the synagogues and the ritual of the Jewish temple, both of which were participated in by early Christians, helped shape the form of the early Christian liturgy of the word and the liturgy of the Eucharist in the Mass of the Catholic Church. The early Christian use of incense in worship seemed first to originate in Christian funeral rites, and later used during regular worship services. Incense was also used in the Bible to worship God and symbolize prayer, in both the Old Testament and New Testament; one of the three Magi offered Christ frankincense, and in the Book of Revelation, angels and saints appear in Heaven offering incense to God, thus setting a precedent for Christian use of incense in worship.

Worship as singing underwent great changes for some Christians with the Protestant Reformation. Martin Luther, a music lover, composed hymns that are still sung today, and expected congregations to be active participants in the service, singing along.[citation needed]

John Calvin, in Geneva, argued that while instrumental music had its time with the Levites of the Old Testament, it was no longer a proper expression for the church.[citation needed] This was expanded upon by John Knox (see Presbyterian worship); only Psalms were sung, and they were sung a cappella. Furthermore, in the Genevan and Scottish Reformed tradition, man-made hymns are not sung, being seen inferior to the God-inspired psalms of the Bible. The Calvinist Regulative Principle of Worship distinguishes traditional Presbyterian and Reformed churches from the Lutheran or other Protestant churches. 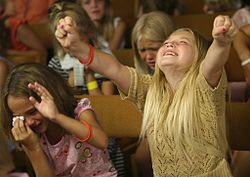 Children at a Gospel presentation

Current Christian worship practices are diverse in modern Christianity, with a range of customs and theological views. Three broad groupings can be identified, and whilst some elements are universal, style and content varies greatly due to the history and differing emphases of the various branches of Christianity.

In many Christian traditions, regular public worship is complemented by other forms of worship, such as individual meditation, prayer and study, small group prayer (often linked with Bible study),[1] and formal ceremonies on special occasions, including weddings, funerals, baptisms and events of Church or state.[citation needed]

While differing considerably in form, the following items characterise the worship of virtually all Christian churches. 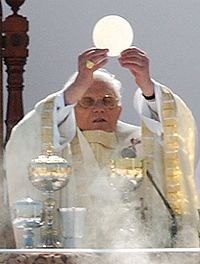 Pope Benedict XVI elevating the Eucharist for worship of the faithful amidst incense.

This grouping can also be referred to as the Eucharistic or Catholic tradition, but it is important to note that it is not limited to the Catholic Church. It also includes the Oriental Orthodox churches, the Eastern Orthodox churches, the Lutheran churches and most branches of the Anglican Communion. Worship (variously known as the Mass, Divine Liturgy, Divine Service, Eucharist, or Communion) is formal and centres on the offering of thanks and praise for the death and resurrection of Christ over the people's offerings of bread and wine, breaking the bread, and the receiving of the Eucharist, seen as the body and blood of Jesus Christ. Churches in this group understand worship as a mystic participation in the death and resurrection of Christ, through which they are united with him and with each other. Services are structured according to a liturgy and typically include other elements such as prayers, recitations, hymns, choral music, the reading of Scripture, and some form of teaching or sermon. In the theology of the Catholic Church, the Mass takes on another dimension, that of a sacrifice with is a ritualistic re-presentation of the Body and Blood of Christ to God the Father. The service is usually led by a priest who wears vestments (sacred clothing).

In many other Protestant traditions, particularly non-conformist groups such as the Methodist, Baptist, and Presbyterian churches, but also some parts of the Anglican Communion, corporate worship is shaped by the legacy of the Reformation. The emphasis is on the Bible as the ultimate authority in all matters and services therefore focus on a sermon, which is frequently an exposition of part of the Bible or an exhortation on morality or faith. Worship in such a context also generally features spoken prayer (either unscripted or prepared), Scripture readings, and congregational singing of hymns. Some liturgy is normally used but may not be described as such. The Lord's Supper, or "Communion", is celebrated less frequently (intervals vary from once a week to annually according to the denomination or local church), and a small number of groups such as the Salvation Army do not observe Communion. Vestments are less elaborate or absent, and in some traditions services may be led by laity.[citation needed] 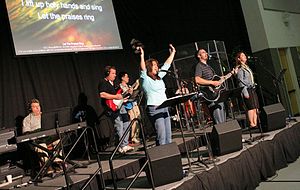 Since the late 1960s, there have been significant changes to Protestant worship practices, resulting from both the theological and musical influences of the charismatic movement.

First, contemporary worship music is now widespread and can be found in many churches, including those that do not subscribe to a charismatic theology. This music is written in the style of popular music or folk music and therefore differs considerably from traditional hymns. It is frequently played on a range of instruments that would not have previously been used in churches such as guitars (including electric) and drum kits. Use of the pipe organ is therefore less prevalent.

Second, a new music-centred approach to worship, known as contemporary worship, is now commonplace. The replaces the traditional order of worship based around liturgy or a "hymn-prayer sandwich" with extended periods of congregational singing sometimes referred to as "block worship". A contributing factor to this, again resulting from the charismatic movement, is the creation of numerous new churches (such as the Vineyard churches), which have experienced significant growth and dramatically altered the composition of Protestant Christianity. These new churches are outside of established denominations and adopted charismatic theology and contemporary forms of worship from the outset.

Within the Catholic Church, the charismatic movement has had much less influence on the structure of regular worship, although contemporary worship music is sometimes used in some parishes, particularly those affected by a movement known as the Catholic Charismatic Renewal. This movement is frowned upon by many clergy,[who?] and use of contemporary worship music, which is considered secular, has been condemned in several official Church statements and documents.[3][4][5] Worship practices in the Eastern Churches have largely remained unaffected.