Doctor of the Church

Doctor of the Church 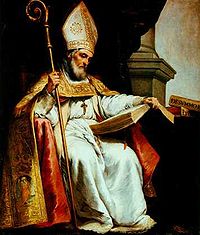 St. Isidore of Seville, a 7th century Doctor of the Church, depicted by Murillo (c. 1628) with a book, common iconographical object for a doctor.

Doctor of the Church (Latin doctor, teacher, from Latin docere, to teach) is a title given by a variety of Christian churches to individuals whom they recognize as having been of particular importance, particularly regarding their contribution to theology or doctrine.

In the Catholic Church, this name is given to a saint from whose writings the whole Church is held to have derived great advantage and to whom "eminent learning" and "great sanctity" have been attributed by a proclamation of a pope or of an ecumenical council. This honour is given rarely, and only after canonization. No ecumenical council has yet exercised the prerogative of proclaiming a Doctor of the Church. 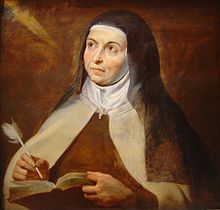 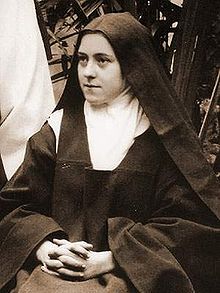 St. Thérèse of Lisieux in the Carmelite Brown Scapular, 1895

The Doctors' works vary greatly in subject and form. Some, such as Pope Gregory I and Ambrose were prominent writers of letters and short treatises. Catherine of Siena and John of the Cross wrote mystical theology. Augustine and Bellarmine defended the Church against heresy. Bede's Ecclesiastical History of the English People provides the best information on England in the early Middle Ages. Systematic theologians include the Scholastic philosophers Anselm, Albertus Magnus, and Thomas Aquinas.

Until 1970, no woman had been named a Doctor of the Church, but since then three additions to the list have been women: Saints Teresa of Ávila (St. Teresa of Jesus), Catherine of Siena, and Thérèse de Lisieux[1] (St. Therese of the Child Jesus and of the Holy Face), "the Little Flower". Saints Teresa and Therese were both Discalced Carmelites.

Traditionally, in the Liturgy, the Office of Doctors was distinguished from that of Confessors by two changes: the Gospel reading Vos estis sal terrae ("You are the salt of the earth"), Matthew 5:13-19, and the eighth Respond at Matins, from Ecclesiasticus 15:5, In medio Ecclesiae aperuit os ejus, * Et implevit eum Deus spiritu sapientiae et intellectus. * Jucunditatem et exsultationem thesaurizavit super eum. ("In the midst of the Church he opened his mouth, * And God filled him with the spirit of wisdom and understanding. * He heaped upon him a treasure of joy and gladness.") The Nicene Creed was also recited at Mass, which is normally not said except on Sundays and the highest-ranking feast days. The 1962 revisions to the Missal dropped the Creed from feasts of Doctors.

As of 2011, the Catholic Church has named 33 Doctors of the Church. Of these, the 17 who died before the Great Schism of 1054 (marked * in the list below) are also venerated by the Eastern Orthodox Church. Among these 33 are 25 from the West and 8 from the East; 3 women; 18 bishops, 29 priests, 1 deacon, 2 nuns, 1 consecrated virgin; 24 from Europe, 3 from Africa, 6 from Asia. More Doctors (12) lived during the 4th century than any other, while the 2nd, 9th, 10th, 15th, and 20th centuries possessed no Doctors at all (though St. John of Ávila, whose declaration as a Doctor is apparently forthcoming, lived briefly during the 15th).

On August 20, 2011, Pope Benedict XVI announced that he would soon declare St. John of Ávila a Doctor of the Church. No date, however, was set for this declaration.[2]

In addition, parts of the Roman Catholic Church have recognized other individuals with this title. In Spain, Fulgentius of Cartagena and Leander of Seville have been recognized with this title.[citation needed] Though not named Doctors of the Church or even canonized, bl. John Duns Scotus has been called Doctor subtilis (Subtle Doctor), and the priest and professor Francisco Suárez Doctor eximius (Excepted Doctor).

The Eastern Orthodox church honours many of the pre-schism saints as well, but the application of the term Doctor or Father of the Church is somewhat more flexible than in the West, and it is misleading to look for lists of officially recognized Doctors. Indeed, the more usual term used is 'Father'. An Eastern Orthodox understanding of such pillars of the Church includes saints such as Photios I of Constantinople, Gregory Palamas, Nicodemus the Hagiorite and possibly even more recent saints such as Nectarius Kefalas. An exception to this flexibility is the grouping of Basil the Great, Gregory of Nazianzus and John Chrysostom, universal teachers or Doctors who are collectively known as the Three Hierarchs and represent the Christianization of the Hellenic tradition and education. In addition, besides St John the Evangelist, two other saints bear the title 'Theologian': they are St Gregory of Nazianzus and St Symeon the New Theologian.

The Armenian Church recognizes as Doctors of the Church Hierotheus the Thesmothete, Dionysius the Areopagite, Pope Sylvester I, Athanasius of Alexandria, Cyril of Alexandria, Ephrem the Syrian, Basil the Great, Gregory Nazianzus, Gregory of Nyssa, Epiphanius of Salamis, John Chrysostom, Cyril of Jerusalem, and their own saints Mesrob, Eliseus the historiographer, Moses of Chorene, David the philosopher, Gregory of Narek, Nerses III the Builder, and Nerses of Lambron. (See also Vardapet)

Assyrian Church of the East

The Assyrian Church of the East recognizes as Doctors of the Church Eliseus, Diodore of Tarsus, Theodore of Mopsuestia, and Nestorius.

The churches of the Anglican Communion tend not to use the term "Doctor of the Church" in their calendars of saints, preferring expressions such as "Teacher of the Faith". Those thus recognized include figures from before and after the Reformation, most of whom are also recognized as Doctors of the Church by Rome. Those designated Teachers of the Faith in the Church of England's calendar of saints are as follows:

Since all of the above appear in the calendar at the level of Lesser Festival or Commemoration, their celebration is optional. Similarly, because "In the Calendar of the Saints, diocesan and other local provision may be made to supplement the national Calendar",[3] those Doctors of the Church recognized by Rome may also be celebrated in the Church of England.