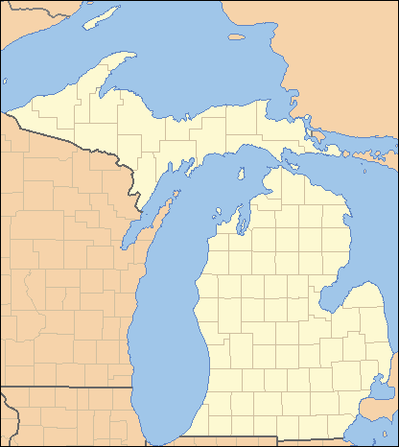 There are 83 counties in the U.S. state of Michigan. The boundaries of these counties have not changed substantially since 1897. However, throughout the 19th century, the state legislature frequently adjusted county boundaries. County creation was intended to fulfill the goal of establishing government over unorganized territory, but a more important goal was encouraging settlement by surveying the land and dividing it into saleable sections.

The creation of counties generally occurred in two stages. First the boundaries of a county were declared and given a name. The county appeared on maps, even though this may have been the entire extent of a county's tangible existence for several years. During this period, the as yet unorganized county was attached to another already organized county for administrative purposes. The legislature frequently changed the administrative attachment of these unorganized counties. Residents of such an attached county could petition the legislature for organization, which was the granting of full legal recognition to the county.

There are many cities and villages that span county boundaries in Michigan, including its capital, Lansing. For a few years during the early 1970s, split cities briefly had authority to petition to change the county boundaries to accord with the city boundaries. The only city to take advantage of this brief opportunity was New Baltimore (previously split between Macomb County and St. Clair County; now completely in Macomb). This transfer of territory from St. Clair to Macomb was the only county boundary change in Michigan since the early 20th century.

The origin of some names is unclear and credible scholarly sources disagree on the meaning (or intended meaning).

The wholesale renaming of Michigan counties in the early 19th Century made several cultural and political points.

Nine counties have names invented by Henry Schoolcraft, usually adapted from parts of Native American words, but sometimes having parts from Greek, Arabic and Latin roots.[3]

Henry Schoolcraft's made up words have disputed sources. While he was a devotée of Native American words and culture, some of his words may have originated with tribes from other areas of the country, such as New York or the northeast, where many settlers to Michigan came from. Real Native American words were eradicated,and he substituted made-up pseudo words, sometimes with a kernel of Indian language or sound in them.[4][5][6]

A second group of four counties were renamed for Irish locales, apparently because it was close to the heart for certain Michigan legislators or their constituents.

Ten counties, the so-called cabinet counties, were named for persons who served in Andrew Jackson's presidential administration, which was tied to Michigan's anticipated ascendancy to statehood. Eight were named in 1829. Livingston County was named in 1833. Cass County was also named in 1829, but Governor Lewis Cass did not become a member of Jackson's Cabinet until 1831.[3][4][7]