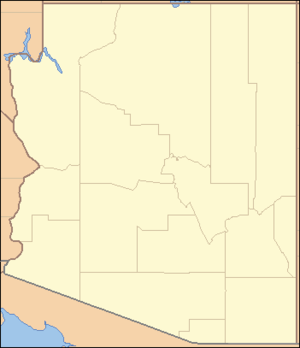 There are 15 counties in the U.S. state of Arizona. There is also one defunct county: Pah-Ute County was formed in 1865 from Mohave County and returned in 1871. Four counties (Mohave, Pima, Yavapai and Yuma) were created in 1864 following the organization of the Arizona Territory in 1862. All but La Paz County were created by the time Arizona was granted statehood in 1912.[1]

The names of many of the counties pay tribute to the state's Native American heritage. Fully nine of the fifteen counties are named after various native groups that are resident in parts of what is now Arizona. Three of the other counties have Spanish names from the language of the early Hispanic explorers of Arizona: La Paz County, Santa Cruz County, and Pinal County. Another county, Graham County, is named for a physical feature, Mount Graham, with the final county, Greenlee County, being named after one of the state's early pioneers.[2]

Arizona's postal abbreviation is AZ and its FIPS code is 04.