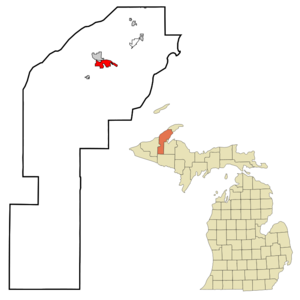 Houghton is sometimes confused with, or thought to be close to, Houghton Lake; the latter is actually located in the state's Lower Peninsula. Due to its location in the northwestern portion of the Upper Peninsula, Houghton is isolated from the state's most populous areas. It is farther to travel from Houghton to than it is from Detroit to , or Louisville, . [cite book|first=Willard Michael James|last=Baird|title=This Is Our Michigan|publisher=Federated Publications|year=1959|page=2]

Houghton was named after Houghton County, which was named after . [cite web|title=Houghton, Michigan 49931: InfoMI.com|url=http://www.infomi.com/city/houghton/|accessdate=2007-10-02]

The area lends itself to a wide variety of outdoor sports, both winter (, Nordic and Alpine skiing, figure skating, and snowmobiling) and summer (trail running, hiking, camping, kayaking, sailing, windsurfing and road and mountain biking).

The last nearby mines closed in the late 1960s, but a school founded in 1885 by the to teach metallurgy and mining engineering, the Michigan College of Mines, continues today under the name of and is the primary employer in the city. MTU has a reputation for being a good value in education and attracting engineering and science students who like the outdoors.

The first known European settler of Houghton was named , who set up a store named Ransom's near Portage Lake, [Taylor p. 11] though it is unclear whether this was in the same building as the 1852 Shelden and Shafer drugs, sometimes described as "the first commercial building constructed in Houghton," which Sheldon owned with his son Ransom B. [Taylor p. 40] The main street of Houghton, variously called "Sheldon Avenue," Sheldon Street and Shelden Avenue, is named for him. In the 1970s the construction of a parking deck and the connection of downtown stores [Eckert p. 409] to create significantly changed the downtown.

William W. Henderson was appointed the first postmaster of Houghton in 1852.

Houghton gained in importance as a port with the opening of the in 1873; [Eckert p. 461] the waterway being the cumulative dredging and extension of the Portage Lake, Portage Shipping Canal and Lily Pond so as to isolate the northern part of the Keweenaw Peninsula into Copper Island.

In 1854, platted Houghton, which was incorporated as a village by Sheldon, C [hristopher] C [olumbus] Douglass and Capt. Richard Edwards three years later. [Taylor p. 39] In Houghton's first days it was said that "only thieves, crooks, murderers and Indians" lived there. The postwar boom and increasing demand for copper wiring fueled the development of Houghton in the 1860s and 1870s. [Taylor p. 39]

1909 saw the founding of what would later become .

During the bitter , the was called in after the sheriff petitioned the governor.

Houghton was the birthplace of professional ice hockey in the United States when the Portage Lakers were formed in 1903. Houghton is the home of the Portage Lake Pioneers Senior Hockey Team. The team's home ice is , named after James R. Dee. Dee Stadium was originally called the , before it was severely damaged in a 1927 fire. (The also contains a for .)

In the winter of 2001, Houghton was the site of one of the first s (Finnish temporary snow houses) to be constructed in the United States.

On , , the first day of issue ceremony was held in Houghton for the " stamps" issued by the . [cite web|title=United States Postal Service Press Release: "Four Whimsical Snowmen Figurines Featured On U.S. Postage Stamps"|url=http://www.usps.com/news/2002/philatelic/sr02_080.htm|accessdate=2007-09-26]

In the neighbourhood is , containing an outdoor ice rink and lawn tennis courts. Along Portage Lake is the Raymond Kestner Waterfront Recreation Area, the principal feature of which is a large "" ; it also includes Houghton Beach. Along the waterfront, in the area that used to be occupied by the railroad tracks, runs the "flat, paved" [http://www.keweenawnow.com/happenings/art_music_festival_05_05/festival_may_05.htm] for bikers and pedestrians; at one end of this is the Houghton RV Park, [cite web
url = http://www.cityofhoughton.com/rec-rv.php
title = RV Park - City of Houghton
accessdate =
accessdaymonth =
accessmonthday =
accessyear =
author =
last =
first =
authorlink =
coauthors =
date =
year =
month =
format =
work =
publisher =
pages =
language =
doi =
archiveurl =
archivedate =
quote = ] at the other end the Nara Nature Park and midway along this corridor is "," [http://www.keweenawnow.com/happenings/art_music_festival_05_05/festival_may_05.htm] which is really nothing more than a parking lot. Prince's Point Beach is also along this trail. [http://usg.students.mtu.edu/usg/index.php?curpage=116] Veterans Park is just across the from Hancock, and contains the memorial to the Houghton Company, which fought in the Civil War. Houghton is the headquarters for .

The Portage Lift Bridge [ http://upload.wikimedia.org/wikipedia/commons/b/be/Portagelakeliftbridge.jpg] crosses , connecting Hancock and , by crossing over Portage Lake, which is part of the river and canal system that crosses the entire peninsula. The Portage Lift Bridge is the world's heaviest and widest double-decked vertical lift bridge. Its center span "lifts" to provide convert|100|ft|m of clearance for ships. Since rail traffic was discontinued in the Keweenaw, the lower deck is used to accommodate traffic in the winter. This is the only land based link between the north and south section of the Keweenaw peninsula, and is crucial. [ [http://www.keweenaw.info/virtualkeweenaw.aspx Virtual Keweenaw Peninsula.] ]

Houghton has a but the (typically) long and snowy (due to lake-effect snow, with an average of 208 inches) [cite web|title=City of Houghton|url=http://www.cityofhoughton.com] winters occasion much humor. It is sometimes said that Houghton has "two seasons: winter's here and winter's coming." [cite book
first=Michael
last=McKinley
title=Hockey: A People's History
publisher=McClelland & Stewart Ltd.
id=ISBN 0-7710-5769-5
pages=43
year = 2006]

While Houghton's winters may be the subject of humor, residents take the subject of snow and winter very seriously. Houghton is one of the premier "Winter Cities" found anywhere. A "" is a community that accommodates winter, celebrates it, and whose residents generally enjoy the season by participating in a variety of outdoor activities. Among those activities are cross country skiing, snow-shoeing, ice fishing, snowmobiling, ice skating and outdoor hockey, among other activities.

Houghton's summer climate tends to be especially pleasant, as hot temperatures are often moderated by the cool waters of the nearby Lake Superior.

Every summer, the city of Houghton hosts a festival known as "Bridgefest," to commemorate the building of the ; this is often held in conjunction with "Seafoodfest." [http://images.google.com/imgres?imgurl=http://www.flatbrokebluesband.com/photos/BFWALT.jpg&imgrefurl=http://www.flatbrokebluesband.com/photos.php&h=383&w=640&sz=138&hl=en&start=111&um=1&tbnid=zwZV_NrIDRROJM:&tbnh=82&tbnw=137&prev=/images%3Fq%3DHoughton%2BMI%26start%3D100%26ndsp%3D20%26svnum%3D10%26um%3D1%26hl%3Den%26sa%3DN] Every fall, the Parade of Nations takes place in downtown Houghton to commemorate the ethnic diversity of Michigan Technological University. "Strawberry Fest" is held every summer, which not only the celebrates the fruit, but also includes an art market with paintings, photos, sculptures, and crafts.

The city houses two museums. The Carnegie Museum, located in the former Portage Lake District Library building, contains photographs from the Raffaelli Historical Photo Collection [http://www.cityofhoughton.com/documents/09-27-2006.pdf] and other artifacts on the history of the local area, as well as a mural depicting the history of Houghton, Ontonagon, Baraga and Keweenaw Counties [Gahagan, Kayla, "Mural in Motion," "The" [Houghton, Michigan] "Daily Mining Gazette," p.1] and exhibits of artwork. The , state mineral museum of Michigan, is located on the campus of Michigan Technological University.

The town is sometimes referred to by locals as "Hoton" or "Ho-town." "Hoton" is even stenciled on city property. Since Houghton and Hancock are very near each other, their combined area is often referred to as "Houghton-Hancock," though the towns are often fierce [Taylor p. 54] rivals, something particularly manifested by the sports rivalry between and Hancock Central.

Tourism is a major industry in Houghton. Summer tourism is very popular, especially among those wishing to tour old mines, visit various historical sites, and camp. Winter tourism is also very active from November through April, for snowmobiling, skiing and other winter sports.

There were 2,114 households out of which 21.1% had children under the age of 18 living with them, 31.6% were married couples living together, 7.9% had a female householder with no husband present, and 58.5% were non-families. 35.2% of all households were made up of individuals and 12.2% had someone living alone who was 65 years of age or older. The average household size was 2.34 and the average family size was 2.94. Note that the does not consider people living in communal arrangements, such as university dormitories, to be part of a household; this is relevant in a community with a large student presence such as Houghton.

Houghton Motor Transit operates both a demand bus and a route bus throughout Houghton and in nearby parts of Portage Township; there are also night trips to in Ripley. [http://www.cityofhoughton.com/citytransit.html]

Houghton is the port of departure for . [cite book
| first=Dixie
last=Frankin
title=Michigan
publisher=Graphic Arts Center Publishing Company
id=ISBN 1558680993
pages=7
year = 1994] Cruise ships on the great lakes formerly (in the 1950s) used to frequently stop in Houghton, but this is now an exceedingly rare occurrence.

Houghton was formerly served by airship. [http://digarch.lib.mtu.edu/showbib.aspx?bib_id=603832#] A departs from Houghton to Isle Royale National Park.

Snowmobiling is a major winter activity in the area, both locally (snowmobiles are often the best available means of transportation after a blizzard) and as a tourist industry. The Bill Nichols Snowmobile Trail has a terminus in Houghton. [citeweb|url=http://www.exploringthenorth.com/keweenaw/billnichols.html|title=Exploring the North article on Bill Nichols Snowmobile Trail]

Power for Houghton is provided by the .

Houghton is generally said to be divided into East Houghton, the Central Houghton area (which includes the ) and West Houghton.

*East Houghton runs from Franklin Square to the eastern city limits. A principal street is College Avenue, characterised by Colonial Revival [Eckert p. 409] homes, which formerly ran from urbanised Houghton "farms, villas and mining operations... and the Michigan School of Mines, now Michigan Technological University;" [Eckert p. 411] today the main campus of MTU has taken over much of the College Avenue area and some of East Houghton generally, [Eckert p. 411] though it remains a primarily residential neighbourhood. (However, this has changed somewhat with construction of the Pearl Street Mall. The Chassell Sands, which are usually considered apart from it, are partially zoned "Industrial." [] ) It is home to East Houghton Park. The park was established in 1974 and contains courts and equipment. The Chassell sands may be technically said to be part of this neighbourhood, but are usually considered as apart from it, as is Minoru-Yamasaki-designed , married-student housing at Tech. [Eckert p. 468]

*Central Houghton is a relatively urbanized area of the town, generally considered as being roughly between Franklin Square and the Portage Lake Lift Bridge. The "heart of Houghton's commercial district" is characterised by [Eckert p. 409] (frequently mined from Jacobsville or Portage Entry) buildings with the frequent "classical detail"; [Eckert p.409] it is centered on Shelden Avenue, the downtown lying in Central Houghton between Montezuma Avenue and Lake Street/Brew Alley/Lakeshore Drive, which are generally considered one continuous street. Recently as 2003 the Houghton area has also brought a micro brew and brewpub, Keweenaw Brewing Company, great for all and also a great place to enjoy they atmosphere of the Keweenaw and a freshly brewed pint. South of this area are a series of streets with small wooden houses, primarily from mining days, rising over the arc of the hills that the city is built upon. Northward is the , which has several s, and older buildings alongside it.

*West Houghton is the site of more recent construction compared to the other two neighborhoods. Therefore the area has a more modern, feel to it than the other areas. This includes larger middle class houses built with large wooded lots between them. Most prominent in this area, however, are the retail stores which are becoming the new commercial heart of the city. These include , , and several recent strip malls, with numerous small stores housed under a single roof. Several prominent beach areas are located on this side of the city. It is often referred to by locals as "ShopKo Heights," the "neighborhood behind ShopKo," or "ShopKoville."

The is a statistical aggregation of the United States census bureau.

Houghton figures in the s "The Truth About Fire" by and "A Superior Death" by , and the poem "The Idea of Children at Houghton, Michigan" in Gavin Ewart's "Penultimate Poems".