Oakland County is a county in the U.S. state of Michigan. The 2010 Census recorded a population of 1,202,362. The county seat is Pontiac.[2] Oakland County is part of the Detroit metropolitan area, though the actual city of Detroit is located in neighboring Wayne County, south of Eight Mile Road. Oakland County is home to 62 cities, villages and townships. These communities range from blue-collar, inner-ring suburbs like Ferndale and Hazel Park, to wealthy cities such as Birmingham, Bloomfield Hills, West Bloomfield Township, and Franklin. The white-collar cities of Troy, Southfield, Farmington Hills, and Auburn Hills host a diverse mix of Fortune 500 companies. The cities of Royal Oak, home of the Detroit Zoological Park, and Ferndale attract many young people to their mature, bohemian downtowns, which have many restaurants, shops and night clubs. Oakland County is also home to Oakland University, a large public institution that straddles the Auburn Hills and Rochester border.

The county's knowledge-based economic initiative, coined "Automation Alley", is one of the largest employment centers for engineering and related occupations in the United States. Oakland County has shared in the recent economic hardships brought on by troubles at General Motors, Ford, and Chrysler, although it has fared better than Detroit and Flint, as its economy is more diverse and less reliant on manufacturing jobs. All three automotive companies are major employers within southeast Michigan and have a significant presence within Oakland County.

Oakland County was originally divided into 25 separate townships, which are listed below. Each township is roughly equal in size at six miles (10 km) by six miles, for a total township area of 36 square miles (93 km2). The roots of this design were born out of the Land Ordinance of 1785 and the subsequent Northwest Ordinance of 1787. Oakland County itself is a prime example of the land policy that was established, as all townships are equal in size (save for slight variations due to waterways). Section 16 in each township was reserved for financing and maintaining public education, and even today many schools in Oakland County townships are located within that section.

Wayne County, where the city of Detroit is located, borders Oakland County to the south. The southern boundary is 8 Mile Road, also known as "Baseline Road" in some areas. The baseline was used during the original surveying for Michigan, and it serves as the northern/southern boundaries for counties from Lake St. Clair all the way to Lake Michigan. This divide (8 Mile Road) has been widely known as an unofficial racial dividing line between the largely black city and almost exclusively white suburbs. Some exceptions to this pattern of de facto segregation have developed in recent years, as middle-class African-Americans depart the city for inner-ring suburbs, notably Southfield, west of Woodward Avenue, but to the east the line has endured.

The Jewish community of metropolitan Detroit, with a population of 72,000, is the 21st largest Jewish community in the nation. This community is concentrated in Oakland County, especially in West Bloomfield, Bloomfield Hills, Farmington Hills, Troy and Huntington Woods.[5]

Created by territorial Gov. Lewis Cass in 1819, sparsely settled Oakland was twice its current size at first, but shrank as Michigan's population grew and new counties were established. Woodward Avenue and the Detroit and Pontiac Railroad helped draw settlers in the 1840s. By 1840, Oakland had more than fifty mills. Pontiac, located on the Clinton River, was Oakland's first town and became the county seat. After the Civil War, Oakland was mainly an agricultural county with numerous isolated villages. By the end of the 19th century, three rail lines served Pontiac and the city attracted carriage and wagon factories. Streetcars began moving people in the late 1890s.

Developers turned southern Oakland County into a suburb of Detroit in the 1890s, when a Cincinnati firm platted a section of Royal Oak called "Urbanrest." Migration worked both ways. Several thousand people moved from Oakland County farms to Detroit as the city attracted factories. By 1910, a number of rich Detroiters had summer homes and some year-round residences in what became Bloomfield Hills. The auto age enveloped Pontiac in the early 1900s. The Oakland Motor Car Co. was founded in 1907 and became a part of General Motors Corp., which was soon Pontiac's dominant firm.

In the 1950s, jobs and people began leaving Detroit. Northland Center opened in 1954. Oakland County passed Wayne County in effective buying power by 1961, when it ranked 28th in the nation in household income. It ranked second-highest nationally in per capita income for counties of more than a million people, behind New York County (Manhattan). The median price of a home in Oakland County skyrocketed to $164,697, more than $30,000 above the national median.

The county government operates the jail, operates the major local courts, keeps files of deeds and mortgages, maintains vital records, administers public health regulations, and participates with the state in the provision of welfare and other social services. The county board of commissioners controls the budget but has limited authority to make laws or ordinances. In Michigan, most local government functions — police and fire, building and zoning, tax assessment, street maintenance, etc. — are the responsibility of individual cities and townships. Oakland County has an elected sheriff, and his or her law-enforcement services are used throughout the county. Fourteen cities/townships do not have personalized police forces, but rather contract with the sheriff for police services specific to the municipalities. For instance, the city of Rochester Hills does not have a "Rochester Hills Police Department," but instead has an established sheriff substation in the city with deputies who are dedicated to that city only. That branch operates as the Oakland County Sheriff's Department, Rochester Hills substation. The sheriff operates in the same manner with other municipalities who opt not to have their own police agencies. This typically is a cost-effective way for municipalities to provide police services to its citizens. The county sheriff also maintains a civil division, marine division, alcohol and traffic enforcement units, and an aviation division.

Oakland County historically has been a stronghold of the Republican Party. However, the county contains a sizable number of unaffiliated voters, many of whom have recently favored the Democratic Party. In the 1990s, Oakland County moved toward the Democratic Party at the national level. Political analyst Michael Barone, among others, has theorized that this occurred when cultural issues such as abortion rights and gun control became more salient than economic concerns for more voters, especially affluent suburban women. Democratic presidential candidates won a plurality of the county's vote in 1996, 2000 and 2004, and a majority in 2008 (See chart at right).

In the 111th Congress, Oakland County is represented by two Democrats, Gary Peters and Sander Levin, and two Republicans, Thaddeus McCotter and Mike Rogers. Peters was elected for the first time 2008, a victory that was seen as a particular coup for the Democrats as his seat, the 9th, had been held by Republicans for over twenty years. 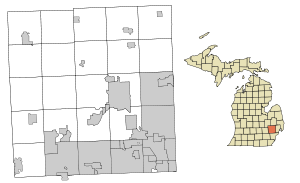 2As of 2004, Hazel Park was the second most densely populated city in the state, succeeding Royal Oak Charter Township after a portion of the township was annexed into Oak Park.

The conditions on most non-residential roads in Oakland County are not favorable to bicycling. Exceptions to this are primarily in the inner-ring suburbs within the southeast corner of the county. This is due to their street grid.

A primary reason for these unfavorable cycling conditions is the Road Commission for Oakland County has a policy of not accommodating bicycles on the road. As a result, some communities have designated sidepaths (locally called "safety paths") as bike routes which do not meet the American Association of State Highway and Transportation Officials (AASHTO) guidelines for bicycling facilities and have been found to be less safe than on-road bike facilities.[8]

As a result, there are no designated Bicycle Friendly Communities within Oakland County.

Novi, Berkley, Clawson, and Ferndale have passed Complete Streets resolutions or ordinances. Only the city of Ferndale has a comprehensive bicycle network. The city of Troy has developed the first non-motorized plan within the county but it has not been adopted by their city council (as of October 2010.) Royal Oak and Novi are currently developing non-motorized plans.

Funded through The Department of Housing and Urban Development (HUD) primarily in the form of Community Development Block Grants (CDBG), this program benefits low to moderate income residents of the 50 communities in Oakland County's program. CDBG funds are used to keep residential neighborhoods sound, attractive, and economically viable.

One facet of the program involves distributing low-interest, deferred-payment loans to homeowners in participating communities to update their residences. Oakland County technicians inspect approved homes and write up work specifications, which are then bid out to approximately six contractors. After bidding, homeowners may either approve the lowest bidder or pay the difference between the lowest bidder and the contractor of their choice.

Oakland County's Homebuyer Program for vacant foreclosed properties is part of the Neighborhood Stabilization Program (NSP) created by the U.S. Congress in 2008 for redeveloping and occupying abandoned and foreclosed homes. NSP is funded through The Department of Housing and Urban Development (HUD), Office of Community Planning and Development under the Community Development Block Grant (CDBG) Program and locally administered by the staff at the Oakland County Community & Home Improvement Division.

MSOC is currently working with 12 downtowns in Oakland County. These communities were selected after a detailed application process in which they demonstrated their readiness and commitment to participating in the National Trust Main Street program.

Oakland County is home to several institutions of higher education.

Oakland University, located in Rochester, is a research university with more than 18,000 students. Rated as one of the country's 82 Doctoral/Research universities by the Carnegie Foundation for the Advancement of Teaching, OU announced plans in the spring of 2007 to establish a medical school on its campus in collaboration with William Beaumont Hospital. The medical school, which will be the fourth in the state of Michigan to offer the M.D. degree, is slated to open in the fall of 2011 or winter of 2012. OU has also partnered with The Thomas M. Cooley Law School which operates one of its campuses near OU, to provide a legal curriculum.

Lawrence Technological University, located in Southfield, has a current enrollment of approximately 4,000 students. Lawrence Tech, which was originally founded in 1932 as Lawrence Institute of Technology, is consistently ranked in the top tier of Midwestern Master's Universities in the annual U.S. News & World Report rankings.

Rochester College, located in Rochester, has a current enrollment of approximately 1,000 students. Affiliated with the Churches of Christ, Rochester College offers a variety of academic programs in the liberal arts and sciences, business, and education.

Walsh College, officially Walsh College of Accountancy and Business, has campuses in Troy, Novi, and in Macomb County.

Many of the public school districts in Oakland County have multiple "National Exemplary" Schools. The International Academy (IA), which is part of the Bloomfield Hills School District, has been ranked by Newsweek as one of the top 10 public high schools in the nation every year since 2003, when IA was ranked the top public high school in the United States.